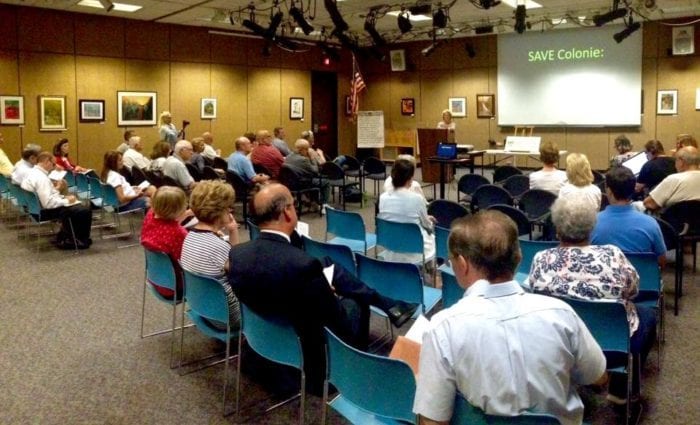 Save Colonie holds its first meeting in the Stedman Room of the the William K. Sanford Library in Loudonville on Wednesday, June 29. Save Colonie/Facebook

LOUDONVILLE — Tensions seemed to peak last week between advocates, town officials and concerned residents during a meeting that was intended to begin a discussion of how to best deal with the ever-growing amount of development in the town.

Save Colonie: A Partnership in Planning, which consists completely of volunteers, was formed recently after residents became concerned with the speed at which natural woodlands were coming down in the town as a result of large development projects. The group currently has more than 73 residents on its email list and more than 100 group members on its Facebook page. Save Colonie held a public meeting at the William K. Sanford Library last Wednesday night to introduce the town to the organization, its agenda, and to also take comments from residents who came to the meeting.

“The town of Colonie is a really wonderful place to live, and it’s also a community that is undergoing an extraordinary amount of development pressure,” group member Susan Weber said during a presentation at the meeting. Weber mentioned that while the town administration does have milestones to be proud of, such as overcoming a large debt, there is room for improvement and a hope for more communication and transparency between town officials and residents, especially considering the fact that Colonie is entering into a review of its Comprehensive Plan.

“The shock of what we’ve seen recently in the town of Colonie, coupled with increased traffic and pressure on infrastructure that is already stressed have motivated community members to seek inclusion on the process. Not merely to have input for input’s sake, but rather to be informed, and assured that our community will be strengthened by the development choices that are made,” she added.

Town residents once again voiced their exasperation with issues such as traffic congestion, loss of wildlife, and what they see as over-development. At a recent meeting of the Comprehensive Plan Review Committee, while Town Supervisor Paula Mahan acknowledged the town’s traffic woes, she defended development by saying that Colonie happens to be in a strategic, central place, something that will not change despite levels of development.

Some residents wanted to know why the Comprehensive Plan is being reviewed, as opposed to the town starting fresh with a new plan. Director of Town Planning and Economic Development Joe LaCivita explained that the current plan is supposed to take the town into the year 2020, and that all of the development going on now is not random, but falls under the plan’s original provisions.

District schools also made their way into the conversation, mainly regarding how residents are afraid that over development could lead to schools being over crowded, and how much communication there is between the schools and the town planning board.

“Mr. LaCivita, I’m sorry to use your name again Joe, but, Mr. LaCivita mentioned that that’s not part of the purview of this plan committee…to work with the school districts on development,” Weber said. She then said that, according to LaCivita at the Comprehensive Plan Review Meeting, the planning board only met with the schools a few times a year to discuss the projects coming down the pipeline, a point which LaCivita immediately clarified.

“You’re kind of misguiding what I said that day,” he responded, noting that the planning board meets annually to talk about upcoming developments with both North and South Colonie Central School districts. He also pointed out that the planning board is helping the districts do a town wide analysis of their systems, their infrastructures, and their busing routes, by providing them with additional data.

Town board member Linda Murphy attended the meeting as well, along with a few other board members. Murphy emphasized the amount of work that goes into being on the board and dealing with these projects first hand. Murphy also noted that, aside from recently, since she was elected to the town board, resident attendance at town board and planning board meetings has been very sparse.

Weber disagreed with the group being labeled as complainers.

“We’re talking about the overdevelopment, and the excess of traffic everywhere. And please view us an empowered group that’s pushing on the other side, pushing back against the developers who are, perhaps, overly influential. We don’t know.”

Despite the fact that many of the same questions have been asked at many different meetings over the recent weeks, the overwhelming tone of the meeting was that residents simply want to understand and be educated and involved with plans for the town. Town attorney Michael Magiulli, who also attended the meeting, commended Save Colonie for labeling itself a nonpartisan group, and said that if it stays that way, it will succeed in its mission.

The group has plans to be more active in attending town meetings, and also raise awareness throughout the area via meetings with media outlets and other outreach activities. Information about Save Colonie can be found on its Facebook page
(https://www.facebook.com/groups/
972162362874102/). The next meeting of the Colonie Comprehensive Plan Review Committee will be on Aug. 24 at 6 p.m. It is open to the public.

Off the rails: two tanker derailments at Selkirk Rail Yard have some local officials yelling, and others yawning