Fire strikes Watervliet warehouse: criminal behavior not suspected to be the cause 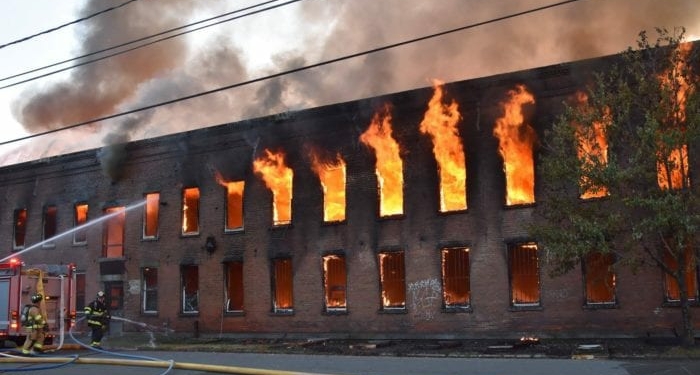 Firefighters combated against 80-degree heat and explosions, as they battled for nine hours to contain a fire that consumed a Broadway warehouse in Watervliet on Saturday, June 25. Photos by Sidewinder Photography

WATERVLIET — Authorities are still investigating the cause of a fire that razed a warehouse Saturday night, but criminal behavior is not expected to be a factor in the case.

A call came in reporting a structure fire at 329 Broadway just past 8 p.m. on Saturday, June 25, according to Watervliet fire chief Robert Conlen. Conlen said by the time firefighters arrived to the scene, a fire in the two-story brick warehouse was well underway, with fires visible in windows on both the East and North sides. Smoke from the flames reached 50-feet and could be seen as far as 50 miles away.

“We had a pretty significant fire upon arrival,” Conlen said. During the fire, several explosions took place inside the warehouse, rattling homes nearby and ultimately causing Watervliet Police to evacuate neighboring residents as a precaution.

To diminish the blaze firefighters pulled multiple two and a half inch hard lines and took a defensive stance that ultimately caused a wall on the far end of the building to collapse. Following the collapse, engines were moved farther away and a rehab area was set up to help firefighters recover and rehydrate in the 80° heat.

The three alarm fire was ultimately fought by firefighting crews from Troy, Green Island, Cohoes and Albany. All were helping to put out the blaze for nine hours.

The fire was deemed under control by 5 a.m. the following morning, said Conlen.

The result was complete destruction of the warehouse, and damage to a neighboring structure. However, there were no civilian injuries, and only one firefighter sustained minor injuries.

Conlen said that investigators are leaning towards an accidental cause, as opposed to any type of criminal activity. Anyone who might have information is encouraged to contact the Watervliet Police Department.

Get To Know: Kristen Roberts

Letter to the editor: Haggling at the post office