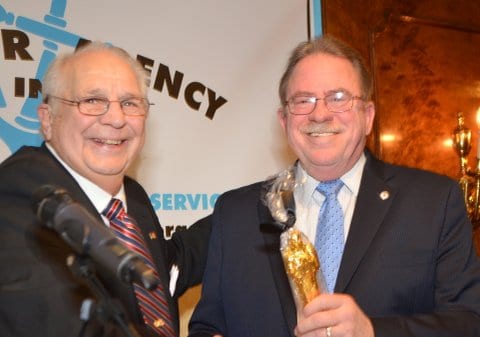 Steve Heider, right, has been appointed by Albany County Executive Dan McCoy to fill a vacant seat on the Albany County Airport Authority board.

“I am pleased that the mass transit committee has approved the nomination of Steven Heider to serve on the Albany County Airport Authority board and sent his nomination to the legislature for its approval on April 11,” said Albany County Executive Daniel P. McCoy. “Over the years, Steve has served the community with distinction, and I am confident that his law enforcement background will be an asset to the board. Steve has devoted his career to the town of Colonie and to the Capital Region. I am confident that he will continue to do so as part of the board at the airport.”

“Albany Airport is run by John O’Donnell and a very accomplished team of professionals,” said Heider, “and I think the board has statutory authority in making sure that it all goes well. I’ve lived in the shadow of the airport for almost 55 years, I’m a huge fanatic of aviation and a frequent flyer and this is something I’ve been interested in. I take pride in the fact that we live in an area with an airport where you can get off your flight and get your luggage within 10 minutes, and that’s a rare thing in airports around the country. Our airport, to me, is a jewel and something that adds to the economic development of the area.”

Declining to identify any priorities before he becomes more familiar with issues facing the authority, Heider did say that he knows there is a lot of interest in improving access to the airport from the Northway, and that he looks forward to seeing that done properly.

“He brings a law enforcement perspective to the board, but also a local law enforcement background,” said County Legislator Frank Mauriello (R). “He knows Colonie very well; he knows the issues and even the traffic patterns. With the airport being in Colonie, you want someone who’s familiar with those concerns: the traffic concerns, the building concerns. He’s been around for such a long time, and he understands that. He goes to planning board meetings and knows the town, and I think that’s important, especially now. There are more threats to US airports now than there ever were before, and so having that background and bringing that to the board, I think, is invaluable.”