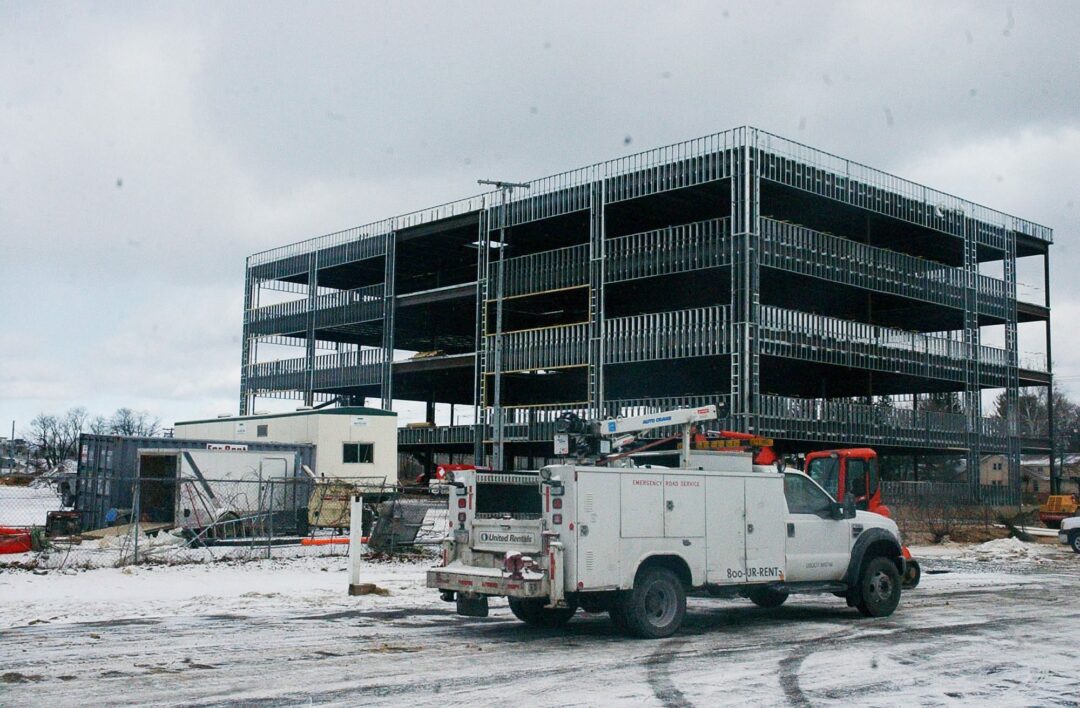 Pioneer Bank will soon call Albany-Shaker Road home for its new headquarters. Just an example of the continuous development in Colonie. Ali Hibbs/Spotlight

COLONIE “The tree issue came up a lot this summer with the residents of Colonie,” said Town Board member Jennifer Whalen, board liaison to the town’s conservation advisory council (CAC). One of the council’s primary functions is to review the many development projects proposed in Colonie during the proposal phases to determine if there are environmental considerations, such as the preservation of beneficial trees or other natural habitats, that should be addressed and then make those recommendations to the town Planning Board.

With significant development projects underway in just about every part of Colonie, town officials have been striving to balance a booming-and lucrative-economic growth cycle with the need to preserve rapidly diminishing open spaces and address residential concerns about things like the increased traffic flows. They do this by putting potential developers through a multi-level process that includes dialogue with town officials, engineers and residents, allowing anyone who has concerns about the proposed project to be heard and, if they have questions, answered. If a developer has plans to cut down trees on property they plan to develop within the town, they will probably have to answer a few questions from the CAC.

“I know there’s been a level of concern about deforesting pockets of the town, or the remaining pockets of town,” said the director of Colonie’s Planning and Economic Development Department (PEDD), Joe LaCivita, pointing out that there are land use laws under chapter 190 of the town code meant to preserve the natural environment insofar as is practical. “We do look at the health of a forested area to see what can or cannot be saved, but typically we try to recompense in the landscaping plan that we get to bring back healthier or more vibrant landscaping in the future.” Acknowledging that new growth does take time, he said that replanting often entails removing invasive species and planting more beneficial flora.

“When we get a development plan in,” said LaCivita, “we actually have the conservation advisory council, along with traffic safety and a number of other internal committees, review the plan and make recommendations back to the town.”

The process that a development plan goes through before ground can even be broken, says LaCivita, is outlined in the town’s land use law and is meant to ensure that any interested parties have a chance to ask questions and voice concerns before construction gets underway. Assuming the parcel of land to be developed is properly zoned for the intended project, the first step would be for a potential developer to meet with a development coordination committee (DCC) and go through the proposal with any town departments who might be involved to ensure that the project is compliant with town land use regulations. At this stage, according to LaCivita, the proposal is more of a conceptual outline. The developer then goes before the town Planning Board with something called a “sketch proposal,” and has a chance to present their intended project and discuss preliminary concerns regarding neighboring residents, landscaping, traffic patterns and other elements affected by the project.

No approval is granted at the sketch proposal stage. The developer, according to comments made at that initial meeting, has a chance to re-conceptualize the project and address any issues that may have been raised. The next step is to develop a “concept acceptance plan.” “So,” said LaCivita, “they’re going to listen to what they were told at the DCC, they’re going to listen to what they were hearing at the sketch plan review and go back and submit, again, under land use law requirements, everything that is needed to get what’s called ‘conceptual acceptance’ from the Planning Board, which would then allow them to seek final approval for the project so that shovel can go into ground.”

Planning Board meetings where the proposals are heard are open to the public for residents to see what the developer is planning, ask questions, offer new information or object to any aspects they feel would adversely affect themselves or their neighborhood. LaCivita is quick to respond to residents concerns, often handing out his business card so they can contact him outside of board meetings, and Planning Board Chairman Peter Stuto is fastidious about ensuring that every resident has a chance to speak.

A recent redesign of the PEDD website, according to LaCivita, is intended to make it easier for residents to follow the progress of development projects from proposal to completion. The site, which can be navigated to from the Town of Colonie website, contains information about meetings and agendas of the Planning Board, the CAC and the Significant Environmental Areas Management Appeals Board, a body that deals with protected waterways within the town. In the near future, he said that they plan to add an interactive map feature that would allow a visitor to click on particular projects to learn more about them.