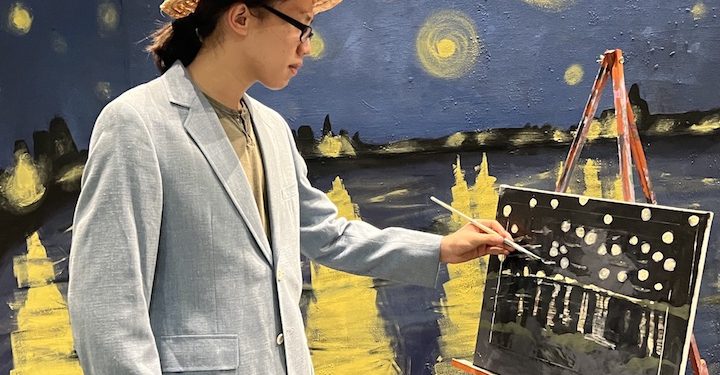 BETHLEHEM — One of the most famous painters of all time will have his story told in a vivid tribute by teacher and director Amy Roos. As the playwright of Sunflowers, she hopes to tell the story of Vincent Van Gogh’s iconic art and complex life.

Roos is the director and advisor for the two extracurricular theater clubs at Bethlehem Central High School, Stage700 and Theatre Without a Net. Theatre Without a Net (TWON) is producing Sunflowers, which will debut December 8th— 11th. Ticket information can be found at bcstage700.org.

“To bring such a tragic and misunderstood figure justice in a way, really sparked my interest,” he said.

Fellow BCHS senior Pamela ‘Pam’ White has many responsibilities for Sunflowers, including the title of Assistant Director. Her theatrical ambitions and activism combined during the production.

“I really hope that our audience for this show walks away with a deeper appreciation for the art and life of Vincent Van Gogh, as well as a deeper understanding of mental health,” she reflected.

Her thorough research educated her about Van Gogh’s friends and family. Theo Van Gogh will be played by BCHS student Jake McKinley. The role of Theo Van Gogh’s wife, Jo Bonger, is an artistic and touching force within Sunflowers. White’s biggest realization with Sunflowers was just how much Van Gogh’s life was impacted by the people around him.

Gu Wong Wu didn’t let the complexities of the role deter him. Instead, he embraced the range. “Throughout the show, Vincent goes through many hardships as well as scattered high notes of his well-being,” he commented.

The cast and crew derived inspiration from Van Gogh’s over 900 paintings and drawings, turning them into 25 central pieces for the play. “One of the highlights of tech crew this year was the painting party,” he remembered, “where we all painted replicas of Van Gogh’s paintings!”

“I was incredibly impressed by the artistic talent of this company to recreate so many iconic works,” said Amy Roos.

The set is intended to resemble a deconstructed Van Gogh painting, with strong imagery to highlight the prolific and initially unappreciated artist. Vincent Van Gogh as a person has often been deconstructed and reduced to myth and lore. With her play, Roos was determined to fight against the stereotypes that surround the artist.

“I have always felt that to truly appreciate art, you need to appreciate the artist,” said Roos. “I really set out to create a play that showed as closely as I could represent through my research who he really was.”

Her research into Van Gogh’s story began intermittently in 2018, but it was a journey to France in 2022 that provided an artistic epiphany. She completed Sunflowers in less than a month after returning home. While she had always been drawn to him and his work, the trip had allowed her to ‘walk in his footsteps’ and see his world through his eyes.

It was in France that Roos and her husband visited all the places where Van Gogh lived for the remaining two years of his life. Their journey took them from Paris to Arles, St. Remy, and finally to Van Gogh’s resting place, where a sunflower is placed on his grave.

The entire experience resonated deeply with Roos. “I felt the inspiration I needed to share this story in an authentic way,” she said.

“I hope that this play inspires us to believe in those around us who are struggling and find ways to help and support new artists at a time when they need our support the most,” Roos added.

Vincent expressed a desire to connect with his viewers. He showed this in his unique paintings, filled with bright colors and a bold style called impasto, every inch of the canvas quivering with emotion. Roos was inspired by a quote he once said: “I want to touch people with my art. ‘I want them to say ‘he feels deeply, he feels tenderly.’”

Honoring these words is what Sunflowers aims to accomplish. “I also hope that people start to see Van Gogh in a new light, to see him as someone who turned his own pain and struggle into something beautiful,” said Roos.

“We must take in every person for all of their flaws,” said Pam White, “but also for their talents and capacity for love, to truly understand who they are.”