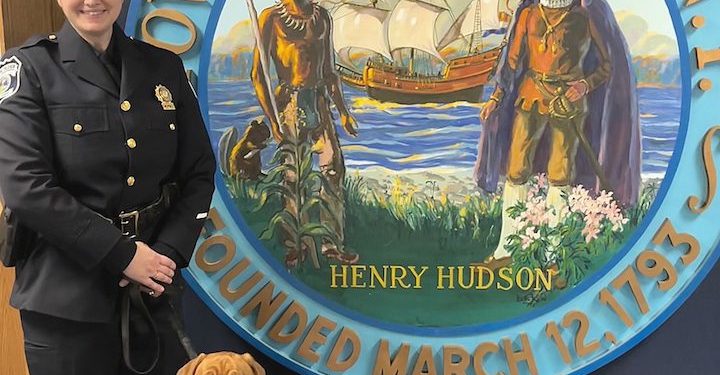 DELMAR — The Bethlehem Police Department promoted Caitlyn Krage to Detective last week and the seven-year veteran has been a ground breaker.

Krage, 30, is the first woman detective and was promoted directly from the position of Patrol Officer.

“Caitlyn Krage has always been a dedicated, conscientious and hardworking officer, already making a big impact in our community earning two lifesaving awards within two years” Bethlehem Police Chief Gina Cocchiara said. “In 2021 she was transferred from patrol and assigned to the Special Services Division as a Community Services Police Officer and has already begun forging relationships with community members, school staff, children and families.”

Many residents know her from her role at the primary School Resource Officer at Bethlehem Middle School.

Krage graduated from Ravena-Coeymans-Selkirk in 2010, earned an Associates of Science in Criminal Justice from Hudson Valley Community College in 2013, a Bachelor of Arts in Criminal Justice from SUNY Plattsburgh in 2015. She became a police officer and graduated from the Zone 5 Regional Law Enforcement Training Academy in 2016 while working at the Coeymans Police Department until she joined Bethlehem in August.

Krage has earned honors for her work in Bethlehem. On Jan. 29, 2020, she responded to a call for an individual in a mental health crisis. Individual made a life threatening decision against himself and she administered her personal tourniquet around the subject’s leg to prevent him from bleeding to death. For this incident she received her first Life Saving Award. Her second came after an incident on June 25, 2021 where she administered life saving measures to clear an infant’s airway and restore spontaneous respiration.

As a Patrol Officer, Krage trained with and by the Community Services and Detective units since 2021 to prepare for the role as Detective.

“She has been assigned to the Bethlehem Middle School as their primary School Resource Officer, taking on many roles, such as educator, counselor and always a law enforcement officer to help provide a safer learning environment,” Cocchiara said.