Still skiing in his senior years 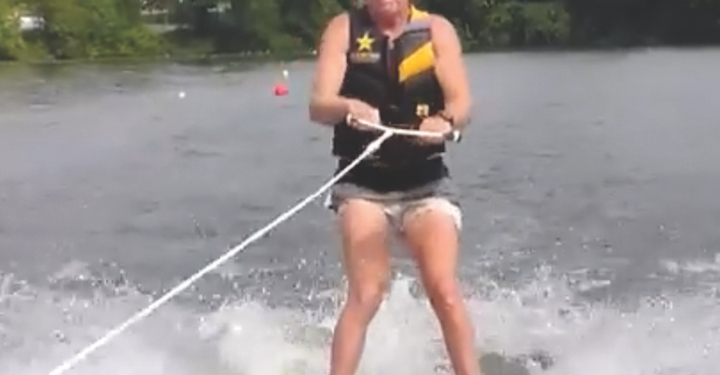 Water skiing at 79 years of age is not a freak accident for Robert Reithner. It’s simply an extension of a life dedicated to hard work, discipline and passion for a sport he grabbed hold of when he was 14.

“A little later in life,” he said, “we’d get up to the lake Friday night, wake up early, and train on the lake and be done by 10 a.m. because it would get too crowded after that.”

One thing led to another and after his education and career were established, he witnessed his first slalom course and competitive skiing and that changed a hobby into a passion.

“I started training,” he said.

Vacations and time off from his work began to be structured around downhill and water skiing. His wife got in on the action and under his tutelage learned to water ski. Eventually, they alternated driving the boat for each other.

For Reithner, the training and practice are the essentials to winning a competition.

“What’s important is the process and doing your best,” Reithner said.

And the last six decades has brought him to the point where he still gets a rush before a tournament.

“There are few of us that still jump,” he said. “It is the last thing in life that I do that gives me butterflies in my stomach … right before a tournament. When I was younger, I was crazy and jumped off cliffs downhill skiing. I don’t do anything like that anymore. I did dislocate a shoulder in my 70s on a water skiing jump, and I was hurting. But no one rehabs harder than I do and I did recover.”

Even so, he recognizes that no one is invincible and squarely describes aging through an athletic example.

“I got up for my 65th birthday and did 65 push-ups that day,” he said. “I’m nearly 80 years old now and I can only do 20 push-ups. That’s just a fact of life. It doesn’t matter how hard I train. So, you notice the diminishment of your physical capacities – even in my ability to ride my bicycle up a steep hill. When I downhill ski out west, I usually get off the mountain around noon.”

“In terms of my mental capacity,” he jokes, “I can remember what I had for breakfast when I was 12. But as for my short-term memory … I ask myself, ‘Did I brush my teeth last night?’”

Diminishment notwithstanding, Reithner has outlived most of his competition, and that is a testament to living one day at a time doing the things that you love.

Perhaps there is still something in everyone’s life that should give them butterflies.

Robert J. LaCosta’s daily devotional is available by writing [email protected] and his “The Age Sage” podcast is available on Apple and Spotify.