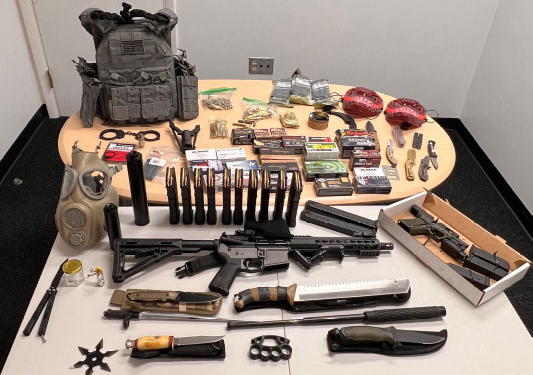 GLENMONT – A traffic stop and subsequent arrest of a Earlton man for being unlicensed and driving an unregistered vehicle without insurance led to the Bethlehem police to find a trunk full of weapons, including a ghost gun, an illegal assault rifle, body armor and bomb-making material.

On Monday, Oct. 10, at approximately 10:11 p.m., Bethlehem police performed a traffic stop in the Walmart parking lot after the police patrol vehicle’s license plate reader alerted the officer that the vehicle had an expired registration while it was traveling on Route 9W.

The driver of the vehicle, Kyle Brush, 35, was found to not have a valid license and the vehicle was not insured. He was taken into custody and processed for aggravated unlicensed operation and operating a motor vehicle with a suspended registration, both misdemeanors, and operating a vehicle without insurance. He and a front seat passenger, Rachael M. Thompson, 40 of Albany were issued appearance tickets and released from the scene, but the car was to be towed from the scene.

When officers were doing an inventory of the vehicle prior to being towed, they found the cache of weapons and bomb-making materials.

According to reports, numerous illegal knives, a rifle (ghost gun), a ballistic vest, large capacity pistol magazines, bomb making materials, brass knuckles, throwing stars, a silencer, and an expandable baton, all of which are considered weapons under NY law.

Bethlehem police located Brush a short time later on South Pearl St in the City of Albany and he was taken into custody.

Thompson was charged with criminal possession of a firearm, a felony, and conspiracy, a misdemeanor. She was released on an appearance ticket.

Bethlehem police were assisted in this investigation by the Albany County Sheriff’s Department, the New York State Police, and the City of Albany Police Department.

Spotlight on Business 2022: A Costume For All Seasons