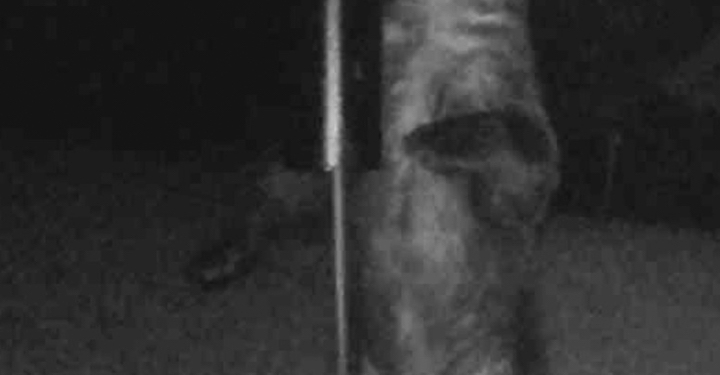 DELMAR — A local family was surprised to see what their trail camera captured after a backyard bird feeder was toppled over during the night.

Ralph Rio said his family bought the trail camera off Amazon a few years ago. Since installing it in his backyard, his family has been “amazed” by the wildlife they have watched through the black and white night vision. He said they have seen deer, opossum, raccoons and fox.

The camera was focused on a bird feeder suspended on a pole, Rio said stood 5 feet and 8 inches off the ground. In the footage captured in the early morning on Friday, July 15, a black bear approached the bird feeder before standing up on its hind legs. His snout appeared to reach as high as the feeder in his initial attempt to retrieve the food.

“Which indicates this male black bear stands about that tall,” Rio said.

The bear soon reached up with his paws and rocked the feeder back and forth, tearing it down along with the pole within seconds. In the video Rio posted on social media, the bear appears to finish off the bird food before proceeding toward the camera for a close inspection. It was all done within a few minutes.

This is the latest of several bear sightings across the region in recent months. In May, the state Department of Environmental Conservation removed a wayward bear from Albany’s Washington Park. Authorities had to shoot the bear with tranquilizers while it was suspended in a tree.

According to a public service announcement posted on the Town of Bethlehem’s website, birdfeeders are known to attract bears to backyards.

The Town Animal Control Officer recommends that residents remove bird feeders from April 1 – Nov. 30, as black bears begin to emerge from their winter dens. Bears are attracted to bird feed, such as suet and seeds.

Good housekeeping is a requirement wherever black bears are found. Simple sanitation measures can be the key to avoid attracting bears. Take responsibility for your safety and encourage your neighbors to do the same!

Remove bird feeders after April 1. New York’s black bears begin emerging from their winter dens in mid to late March. Bird feed such as suet and seeds are a very strong attraction for bears, even if they can’t reach it.

Do not feed pets outside. Leftover food or even an empty dish can attract a bear.

Remove the grease can from grills after every use. Turn the grill on “High” for several minutes after you are done cooking to burn residual odors off the grill.

Do not place food outside to attract any wildlife. Any food stuff used to attract birds, squirrels or other wildlife will also attract bears.

Do not operate refrigerators or freezers outside or on porches. Bears can smell what is inside.

Garbage is extremely attractive to bears! It should always be kept in sealed garbage cans inside a sturdy building like a garage or shed. Anything with an odor can attract a bear. Note: Burning garbage is illegal and may increase its attractiveness to bears.

Bear resistant trash cans are used all over the country to eliminate human-bear conflicts.

If you frequently find bears foraging in your garbage cans, despite proper storage, consider using a bear-resistant trash container.

If you have curbside garbage pickup- Take out trash just before your scheduled pickup. Do not put garbage at the curb the night before.

Do not place meat or bones in compost piles.

Electric Fencing is an effective tool for keeping bears out of apiaries, chicken coops, compost, and gardens.