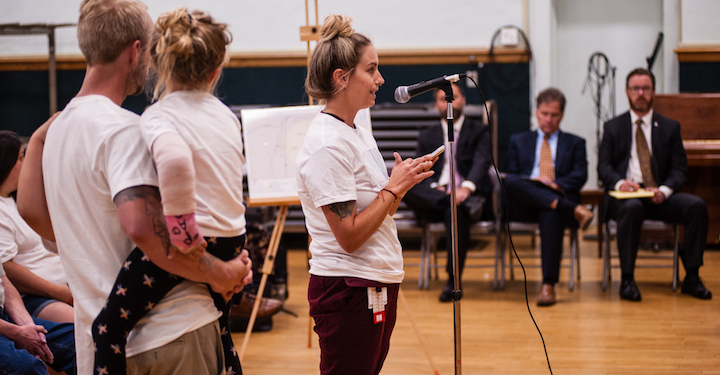 DELMAR — Wednesday night’s meeting of the Bethlehem Town Board was a near repeat of two weeks ago when Glenmont residents filled Town Hall anticipating the opportunity to voice their protests against the Port of Albany expansion onto Beacon Island.

The three-hour meeting was dominated by more than two hours of anecdotes, admonishments and demands the Town of Bethlehem rescind approvals made by its planning board that allowed the multi-million dollar wind tower manufacturing facility to proceed. The most common argument was that they were not aware of the scope of the project.

A lawyer and engineer from the Port of Albany were accompanied by a representative from the state Department of Environmental Conservation. They each presented an update to the expansion project, including details surrounding the tree cutting that stripped approximately 80 acres of fauna from Beacon Island.

According to the supplemental draft environmental impact statement, the expansion plan includes five buildings, the tallest of which is to stand at 110 feet high. The total footprint of the expansion is approximately 589,000 square feet. Each building will house a respective phase in the construction 150-foot long tower sections. A 500-foot wharf is to be constructed, which will involve dredging along the western bank of the Hudson River, to allow completed tower components to be shipped to Brooklyn before they are ultimately installed off-shore.

Port officials attempted to dispel their health concerns associated with particulates while manufacturing tower components, and the 2 million tons of fly ash that had been collecting on Beacon Island for 20 years.

The manufacturing facility is designed to produce approximately 150 towers a year. The process includes oxy-fuel cutting metal. Any emissions caused by the natural gas fuel is to be collected inside the building; so, too, with pollutants caused by welding stations. Dust collectors will remove “99.9 percent” of particulate emissions associated with descaling and abrasive blasting.

Some residents attended the meeting wearing custom t-shirts depicting the chemical compound for arsenic trioxide. Though the compound is not mentioned in the environmental impact statement, arsenic is commonly found in coal fly ash.

The fly ash was a byproduct from the former coal-burning plant, once the Albany Steam Station and later Niagara Mohawk, now owned by PSEG New York. The collection of ash remained unmolested since the 1970s. Residents said they were unaware of the expansion plan before contractors cut trees on the island. Initial news reports stated trees were cut prior to approval.

Anthony Luisi, regional director at the state DEC, told residents the port sought guidance before removing trees from Beacon Island. The DEC said contractors could proceed so long as they followed mitigation guidelines. On Wednesday night, he said the state agency was satisfied with those efforts and will continue to monitor the plan’s progress.

Also stated in the port’s environmental impact statement was a reference to the Town’s Zoning Code and Comprehensive Plan; both stating that the manufacturing facility fits into a suggested use for the Heavy Industrial District in which Beacon Island sits. “Specifically, Section 4.7 of the Comprehensive Plan identifies this Project Area as a Heavy Industrial District with ‘The purpose of this district is to encourage the development of heavy industrial uses that require trucking or rail transportation to move goods and materials.’

Many of the residents returned for a second round following last month’s meeting. Some of whom prefaced their statements by asking if the microphone was on. Town Clerk Nanci Moquin had explained the public’s microphone was not plugged in properly to record residents on the corresponding video for the June 22 meeting.