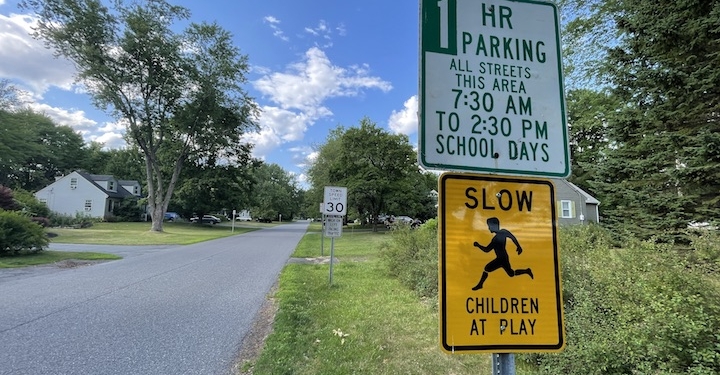 DELMAR — Brockley Drive residents have repeatedly approached the Bethlehem Town Board, clamoring for measures against what they said is excessive traffic and speeding along their long, meandering neighborhood street.

Residents as recently as Wednesday night’s board meeting asked the town board members for suggestions on how it would restore their neighborhood from the thorofare that it has developed into over the years.

No Parking signs are abundant along the roadway. The road runs perpendicular to Delaware Avenue with which it intersects in front of the Bethlehem Central High School, and is bookended on the opposite end by Orchard Street. Residents had successfully campaigned for the signs in the late 1980s to combat student drivers from congesting the neighborhood.

Now the issue has more to do with traffic passing through.

Bobby Moore returned before the board on July 13, repeating issues of damage to front lawns from speeding motorists. She said she worries about the danger it causes to children and the elderly who walk along the street.

“I’m 75 years old. I’ve lived here my entire life and I’ve never seen speeding on the streets in Delmar so bad,” Moore said.  “Something has to be done.”

The Bethlehem Police Department conducted two separate traffic studies along the roadway, the second of which concluded that Wednesday night.

Nearly 6,000 motorists drove north along the road across a nine-day span between Tuesday, July 5 and Wednesday, July 13. Of the 5,786 recorded motorists, the average speed was 21.59 mph. The 85th percentile speed, the speed at or below which 85 percent of the motorists drive, was 28.14 mph.

Brockley Drive has a speed limit of 30 mph.

The police department’s first study, however, showed higher speeds during finals week at the high school, from Thursday, June 9 to Thursday, June 16. The covert counter recorded 8,637 total vehicles traveling in either direction. Those motorists traveled an average 29.42 mph, still below the town speed limit. The 85th percentile average was 34 mph.

The daily average number of motorists traveling through the neighborhood based on the June survey was 1,079.

Another resident’s observations coincided with the police department’s surveys, saying the issue is exacerbated during the school year.

“It’s while school is opening, especially the high school,” said Jeffrey Solo. “It’s when school let’s out. It’s at rush hour. So often cars do a rolling stop, or they don’t ever stop. I’m sure it happens all over town, but this particular intersection [Brockley Drive and Orchard Street], with the volume of traffic, is an issue.”