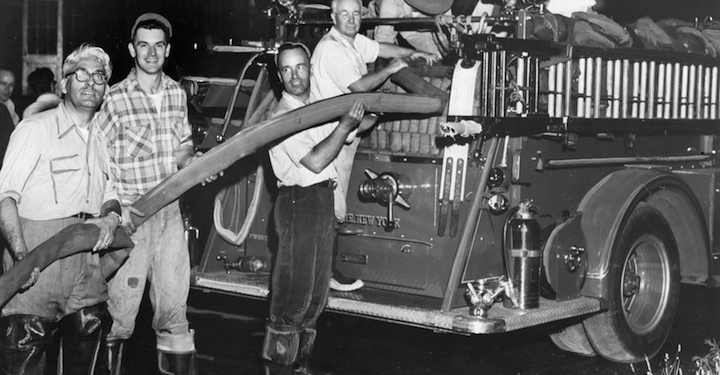 ELSMERE — What is a town without a fire company?

In 1922, residents of Elsmere decided that a Volunteer Fire Company should be established to provide fire protection for the community.

The conversation began in June of that year and the Elsmere Fire Company was officially formed following its request passing in a special election on Nov. 18, 1922—making it the second-oldest Fire Company in Bethlehem, behind the Delmar Fire Department.

To celebrate this 100th anniversary, the Fire Company is hosting a Block Party and Open House later this year at the Elsmere Fire Station and surrounding area.

Today, the station’s airhorn is a familiar sound to residents of Elsmere, but when the Company was first established, it relied on a more manual form of communication. There were three locomotive tires placed around Bethlehem which were each sounded by an attached sledgehammer. When the fire station was originally built in 1929, a siren system was put in place, according to the Company’s current president, Brendan Boyle. The station was expanded in 1963, 1978, and again in 2001-2002, but the original building remains the foundation of the fire house.

The company’s connection to its past helps it to further its original mission of serving the residents of Elsmere. Even its first engine—a Ford Model T chemical truck—remains a beloved member of the Company and is referred to as the “Dinky.” The hundred-year-old engine still takes to the streets of Bethlehem for parades and other events.

“We’ve got a great history that goes all the way back 100 years and frankly, we think we are a pillar of the community,” said Boyle. If nothing more, we’re a very large staple of the community—a tangible history lesson that you can see rolling down the street.”

Though fires burned slower and colder in the earlier days of the Company’s history because “everything was very well built back in the day,” according to Boyle, the Company faced its fair share of natural challenges. For example, according to the book “Bethlehem Revisited: A Bicentennial Story 1793-1993, the United One Hour Cleaners and Shirt Launderers plant in Elsmere was completely lost to a fire in 1960; in the same year, there was another devastating fire at Normanside Country Club. Whether it’s 1960, 2022, or 1922, the risks for firefighters are constant. Despite this fact, Elsmere Fire currently has over 80 active firefighters, and its membership numbers exceed 200.

“It takes hours and hours of very physical, labor-intensive training to become a firefighter. There are so many classes you have to take, so many lessons you need to learn, so much experience you have to have in order to become an entry-level firefighter, never mind someone with seniority and rank,” said Boyle. “That’s commitment right there… Just being in the presence of these great men and women who are wholly committed to the department and to each other, I’ll tell you it’s a real honor.”

Elsmere Fire District, which was formed in 1928 and is currently headed by Chief Marc Futia, is responsible for the firematic and day-to-day operations of the fire house. The Company, which predates the district by six years, handles the social elements of the department’s management, particularly involving recruitment and retention.

One of such efforts is Elsmere Fire Company’s Bunk-In Program for New York State volunteer firefighters. The program is designed for students in the Albany area and offers free student housing in exchange for the students’ service as a volunteer firefighter with the Company. The students are housed in an apartment building next to the fire house that the Company purchased in 2018.

One hundred years after the first residents’ meeting regarding the creation of a fire company, the Elsmere Fire Company remains an integral element of the Elsmere and larger Bethlehem community. Boyle hopes that the September 17 Block Party will bring the community together to join the fire house in celebrating its historic and current achievements.

“We’re going to open up the fire house to the public and to the community at our September 17 Open House and Block Party, said Boyle. “More often than not, when you pass by the fire house, the doors are open… Come on by, swing in, say hi. We’re very proud of our fire department and we love to show it off.”

The 100th Anniversary Block Party and Open House will feature food trucks, vendors, a bounce house, live music, and more. It will be from five to nine p.m., rain or shine.