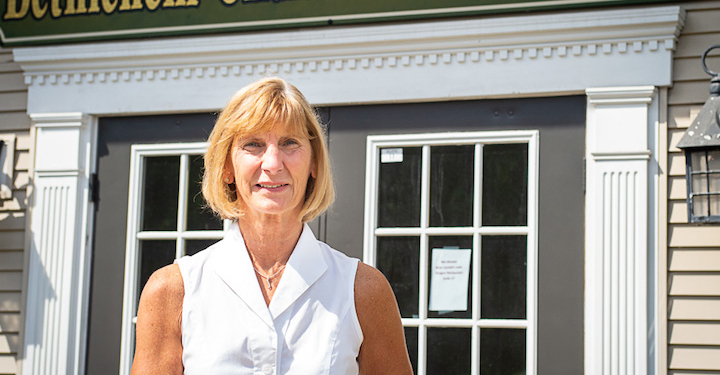 DELMAR — It has been a few years since she held office in town, but Theresa Egan is back as the new President of the Bethlehem Chamber of Commerce.

Egan was Bethlehem Town Supervisor before leaving that post in April 2007 to work in the highest levels of New York State government, but she never left the town she grew up in.

“Being a lifelong resident of Bethlehem, and now having been away from town operations for over 15 years, I look forward to again working with our member businesses, town government and the relationship between, to build a more energetic, robust and thriving economic community,” Egan said. “In my employment over the years, I have been in a position of having to identify relevant issues and then advocate for and find a resolution.”

“While ‘talk’ is good, I will be focused on getting things done,” She said. “Learning and understanding about what are often competing interests, then engaging the right people, early and often, will allow the Bethlehem Chamber to provide the most assistance to its members.”

Vince Crisafulli, Vice Chairman of the Chamber Board of Directors believes that Egan has what it takes to lead and she has a hometown advantage.

“Terri brings a wealth of knowledge of both the local area and the state,” he said. “That knowledge and her experience as a leader at both levels really gives our members a resource they could have never imagined. Let’s face it, these are unprecedented times and local businesses need all the help they can get to navigate through it.”

As for her switch from a government official to a private-sector leader, she looks forward to moving away from politics ruling the direction.

“As an elected official, there were always a myriad of parties involved with nearly all issues and, in addition, as an elected official, there was often a political consideration as well,” Egan said. “As President of the Bethlehem Chamber, I anticipate that town politics will not determine the actions and operations of the Chamber.  I will be focused on the needs of our members and work with the appropriate town employees and officials necessary to resolve our members’ issues.”

Recently the Bethlehem Chamber formed a foundation to help businesses, educators and community come together to make the town stronger.

“The foundation’s initial impetus is to work on developing a workforce from within our town and not rely on others to educate and nurture our kids in the hopes they will return here to raise their families,” Crisafulli said. “Our local businesses need educated and trained people to work here. We hope to help connect the dots.”

Egan echoed that same thought in recalling a conversation from a spouse of one her and her significant other’s six grown children on a recent visit back to Bethlehem.

“Four of the six kids were back for Memorial Day weekend, part of which we all spent at the Memorial Day parade, and our Costa Rican son-in-law said ‘we have to move back here for our kids’ while we were walking/biking home,” she added. “Bethlehem is a special place and I look forward to increasing the attractiveness of our community on behalf of our members.”

Other than the years she was in college, Egan has lived in town all 62 years.

“I actually live in my great-great grandparents’ house a little over a mile from the house I grew up in on McMillen Place right by Town Hall,” She said.

Egan started as President of the 425-member chamber on July 5. It has an office at 318 Delaware Avenue and employs a staff of four.

SPOTTED: 19 new citizens on the 4th of July