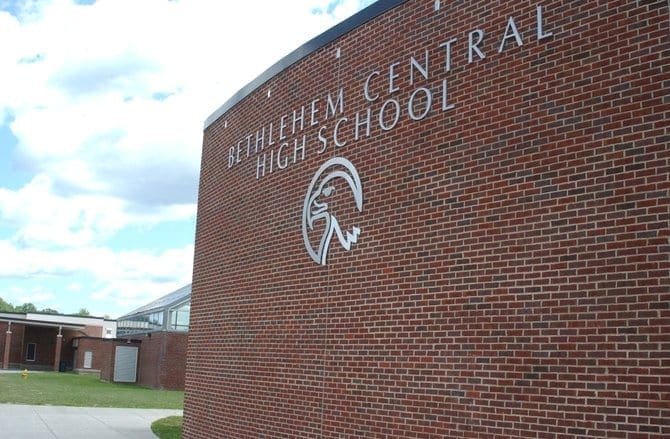 Superintendent Jody Monroe said turnout for the annual budget vote was greater than expected, driven in large part by a four-way race for two open board seats.

“At BC, we talk a lot about the value of community. Nothing says community more than people willing to spend time in a voting line — one that often stretched all the way out to the street — in order to cast their votes,” she said. “You can bet our students were watching and learning this important civics lesson.”

Robert Tietjen and John Walston each garnered enough votes to join the Bethlehem Central Board of Education. Tietjen received 3,072 votes, while Walson earned 2,592. They will each serve a three-year term on the board, beginning July 1.

“Our mission as a school district is to help all students reach their potential,” Monroe said. “Passage of this budget will help us deliver on that mission with added support for students in areas of academics, character, community and wellness.”

With a 315-vote margin, Ravena-Coeyman-Selkirk Central voters approved the district’s proposed $51.2 million budget. The 67 percent approval rate was well above the simple majority needed to pass a budget that did not go above the state tax levy cap.

The 2022-23 school budget handed to voters last week called for a 5.39 percent increase in total spending. The board had already utilized a $1.6 million Fund Balance to mitigate the burden on district residents, containing the tax levy increase to just 2 percent.

Michael Dey, Edward Bedinotti and Jennifer Molino will each take a seat at the Board of Education in July. Deyo earned 553 votes, while Bedinotti and Molino garnered 431 and 409 votes, respectively.

“We are grateful to our community for their support,” said Superintendent Frank Macri. “This budget allows us to maintain all current programs and services and enhance instructional strategies to meet the needs of all learners.”

The district also received overwhelming support to extend a seat on the Board of Education to an active high school student. The newly created position will serve the board as an ex-officio, non-voting member once instituted.

The district’s $395,000 purchase plan to buy three school buses and a work truck was approved, as was the budget for the Voorheesville Public Library and a five-year term for a trustee on the library’s administrative board.

Nearly 5,000 residents came out to vote in Guilderland Central — approving the district’s $109.9 million budget and its bus purchase plan. They also decided who out of a 10-person race was going to fill the four vacant seats on the school board.

“Thank you to all of the community members who voted today,” Superintendent Dr. Marie Wiles said. “Your support of the Guilderland students and staff is greatly appreciated and enables us to continue our commitment to offering robust academics and the programs that contribute to the social and emotional well-being of all students.”

Roughly 68 percent of residents approved the budget amid concerns over the country’s worst rate of inflation in 40 years. Inflation and contractual obligations were both cited as reasons for Guilderland to propose a 4.68 percent increase over the current year’s spending plan. It didn’t deter residents. The 2.98 percent tax levy increase fell within the district’s tax levy limit, requiring a simple majority to approve the budget.

SPOTTED: Guilderland starts out Class A playoffs with a 20-2 win over Colonie