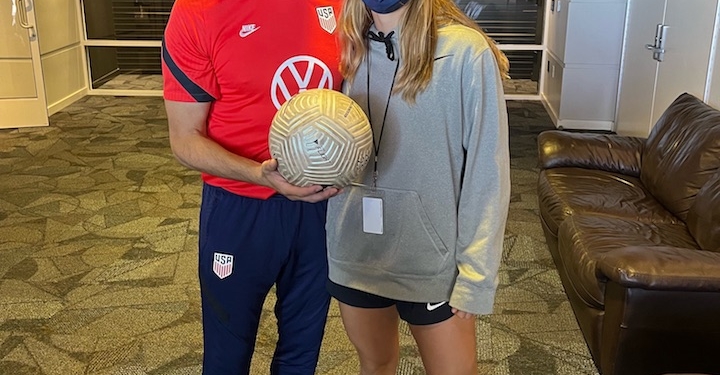 DELMAR — A Bethlehem soccer star is having her chance on the pitch as the United States begins its chance at a national title.

Claire Hutton, Bethlehem Central sophomore, is competing as a midfielder on the United States Under-17 Women’s Youth National Team. The U-17 team is currently qualifying for the 2022 CONCACAF World Cup. This will be Hutton’s first time on a national stage, but she’s worked hard to get here.

“She can with confidence say she’s done everything you can possibly do,” Bethlehem Central girl’s varsity Coach Tom Rogan said.

Rogan first met Hutton when she was a seventh grader. He offered her a spot on the varsity soccer team then. From the first meeting between Rogan and Hutton’s family, Hutton already had the goal of making the national team.

Hutton has continuously worked towards this goal. Regardless of the drill or the practice, she never went through the motions. Every drill and practice was met with the same hyper-focused energy and dedication.

In her seventh and eighth grade years, the team won sectionals. However, the team lost the state championship when Hutton was in seventh grade. Due to the pandemic, there were no sectionals or state tournaments during her freshman year. Hutton still earned the All American title.

“We had incredibly talented teams during her seventh grade, eighth grade and ninth grade years,” Rogan said. “I think that internal competition within those teams really helped her.”

This past fall Hutton didn’t play much on the varsity team because she was invited to try out for the U-17 team. Rogan is also hopeful that Hutton won’t play this upcoming fall season because she will be competing with the team in India for the World Cup in October. Hutton brings out the best in her teammates and coaches locally, so there’s no doubt it will happen with the national team, too.

Hutton’s dedication and devotion to soccer also carries into her academics and other aspects of her life. Rogan confirms that anything Hutton puts her mind to, she’ll be the best at it within no time. Her competitive nature drives her to do well including her honor studies in double advanced math.

This will be the first international tournament in two years. The qualifying tournament started on Saturday in the Dominican Republic. 20 national teams will compete until May 8, where the top three teams will move on to the 2022 FIFA U-17 Women’s World Cup in India in October. As the games begin, there is no doubt Hutton has strong hometown support.

“We’re really anxious to begin watching the games and I can’t wait to see what number she is so I can buy a Claire Hutton jersey,” Rogan said. “I’ve upgraded my cable so we can watch the game.”

On Earth Day, groups focus on trails at Mohawk River Park in Colonie