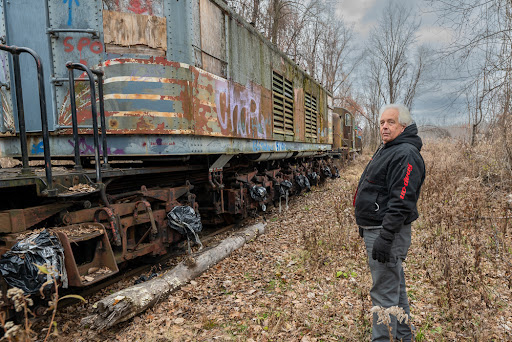 Glenmont resident and train enthusiast Paul Marsh stands by the Alco/GE T-3a locomotive in December 2021 on Beacon Island in Glenmont. Marsh has spent the last 30 years trying to find a way to move the last remaining electric motor of its class to the Danbury rail museum that owns it before the site becomes a factory for wind turbines. (Jim Franco/Spotlight News)

GLENMONT — Time is running out to remove and save two historic electric locomotives at the Port of Albany before ground breaks on the new wind farm development.

The two locomotives, the S-1 and T-3a, were to be moved from their home on Beacon Island early this year. In December 2021, Spotlight News wrote a detailed article on the history of the locomotives, detailing how they are the first electric ones ever built and also the only ones left in existance.

The two will be shipped to Danbury Railway Museum, who acquired the locomotives in 2013; however, four months later these pieces of history still rest on the abandoned rail spur on River Road. The ground the historic relics rest on is proving to be the core of the delay.

“We’ve got obstacles on all four sides,” Stan Madyda, board member and former president of the Danbury Railway Museum said. “We’re just hoping that a solution can be found to get them off and to the museum.”

The museum, the port and others devoted to the project are working together to find a solution that works for all involved. One option is to use side-arm bulldozers that would lift up the four corners of each locomotive and lift the body from its frame. The company the museum is seeking to contract will supply two of the tractors, but four are needed to move both locomotives on trucks.

The property is also covered in coal ash that makes the ground soft. This poses a problem for the tractors because they may sink when carrying the 228,000 – 285,000 pound locomotives. Without ground support, there isn’t a guarantee the tractors would make it to the locomotives themselves let alone lift and move them away from the rails.

Another proposal was to pave a road into the site. However, the sponsors of the moving of the locomotives have said that they are not going to build a road on port property because of the cost. Proving another challenge to the process.

“We’re banking on (the trucking company, the port and PSEG) being able to come together and say ‘yeah. we’re going to pick them up and move them here,’ and we can get them out,” said Paul Marsh, a Glenmont train enthusiast who has worked on moving the locomotives for over 30 years.

Currently, the port’s contractors for the wind farm project have control of the site to cut down trees to give better access to the property. Their work is estimated to be complete within the next few weeks.

In the meantime, Madyda and Marsh are working to get the locomotives ready to be moved once a decision is finalized. On April 13, the two separated the body of the T-3a from its frame. The S-1 will be more difficult to separate and they may have to hire outside contractors to get the job done.

“The S-1 was not made to come apart,” Marsh said. “This takes bigger tools and stronger guys than us. But it can be done.”

The Danbury Museum is calculating the cost of transporting the locomotives. The S-1 and the T-3a can either be trucked all the way to Danbury by road, or split between truck and rail. The variables are making it difficult to determine the cost and best method.

The port plans on moving to the next phase of development by May 1 and the locomotives have to be moved one way or another. The window for a solution is now closing, but those working on the project are committed to getting it done.

“The port cannot have any sort of delay and we can’t be the source of that delay,” Madyda said. “We’re still working towards the goal of saving two locomotives.”

The S-1 locomotive was the prototype for the 1904 electric locomotive project. Although the T-3a was built 21 years later, it is the only remaining one of its class.

The two locomotives came to rest on Beacon Island after continued break-ins and vandalism to the Colonie shops in Watervliet, where they were housed, forced the organization that owned them to move the historic pieces.

The two locomotives will join others that the Danbury Railway Museum has acquired to show the visual progression of technology of how people commuted into New York City over the last 120 years.

The 80 acres the locomotives sit on is planned to become a manufacturing hub for offshore wind farms. The project is a collaborative effort between the Port of Albany and MarmenWelcon who will be making the wind towers and transition pieces. Marmen is the largest wind structure manufacturer in North America and Welcon is the world’s largest manufacturer of offshore wind farms.

For the original story, photos and video of the locomotives, see our package on Spotlightnews.com. https://bit.ly/3McQGV5