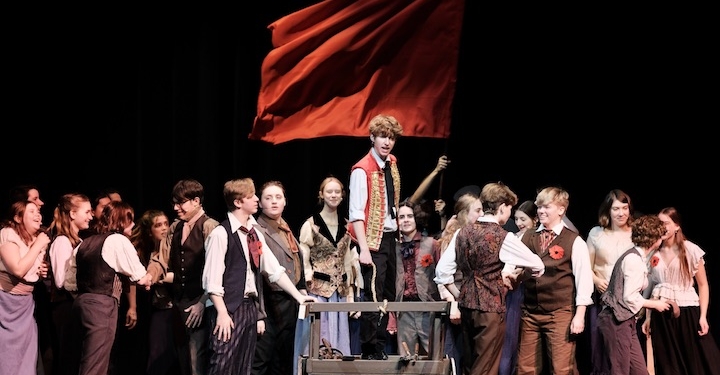 DELMAR-“Part of what makes theater the art form that it is is the live experience. The audience is an essential part of the experience. Nothing can replicate that feeling. It is in the moment, it is present, and then it is over,” said Amy Roos. “It is in those moments that the magic happens.”

The BC Stage 700 director and her students are just days away from Thursday, April 7; the opening night of their production of “Les Misérables School Edition.” There are a couple of noteworthy firsts already appended to that night’s performance. It’s the first show performed unmasked and with a live pit orchestra since the COVID-19 outbreak. It is also the first production staged at Bethlehem Central High School’s $7.8 million auditorium.

The student production has a limited run, from Thursday, April 7 to Sunday, April 10.

Tickets can also be purchased at the door starting one hour before each performance. Tickets are $12 for general admission; $10 for students. Some material is intended for mature audiences.

Roos said she has nearly 100 students in the cast, crew and orchestra — an astounding figure that rivals any professional production found at Proctors in Schenectady. But for her and her students, she said, “it is a return to normal for all of us.”

A lot has changed at Bethlehem Central High school. Alumni will recognize some of what once was their front foyer. Hints of the 70-year-old auditorium’s extensive renovation reveal themselves through a curved, wooden facade that mimics a double bass resting from inside the vestibule. Through its interior doors, patrons are welcomed to a modern playhouse in every sense.

Superintendent Jody Monroe said the district had looked into an “entirely new auditorium, but without state building aid, “that option was deemed cost-prohibitive.” Instead, administrators held talks with staff and community leaders on how best to renovate. In November 2016, residents approved a $32 million bond referendum, paying toward more than 100 facility improvement projects throughout the district, including the high school’s playroom.

The room maintains the same footprint as it did when the school first opened in 1952 — the first stage production premiered in 1954. New seating is accompanied by modern lighting and asymmetric acoustic fixtures above that resemble the work of sculptor Alexander Calder.

The auditorium was closed for nearly two years as construction crews installed a new, wider stage floor that can be extended into the orchestra pit. A fly loft was built out above, creating a vaulted ceiling that allows for storage and easier scene changes. When action calls, the stage is equipped with a retractable addition that extends closer to the audience.

But when construction crews completed the project in October 2020, stages across the country were silenced by COVID-19 mitigation protocols.

“When we finished ‘Titanic,’ we knew that we wanted to open the new auditorium with a big show,” Roos said. Stage 700 closed out its Spring 2019 production acknowledging that its next show would be on the road. As the calendar turned to 2020, students prepared to open “Chicago” at The Egg that April. New York’s Broadway shutdown its lights on March 12. It had a cascading effect on the rest of the arts world.

Victor Hugo’s masterpiece recounts the events surrounding France’s June 1832 Rebellion. It was a rebellion over fighting political factions related to the French Revolution. Roos describes it as a struggle against adversity, one which Hugo witnessed himself. The school edition is a version of the classic musical by Alain Boubil and Claude-Michel Schöneberg, which is based on Hugo’s novel.

The social upheaval of the musical resembles the turmoil in current events captured in today’s global headlines. While Washington D.C. continues to investigate those responsible for the January 6 Insurrection last year, world leaders orchestrate a delicate strategy to aid Ukraine as it defends itself against Russian forces.

The day after Russian armies launched their invasion of Ukraine, Roos said she sat her students down before that night’s rehearsal. They were preparing for Act II which features several battle attacks.

“It feels wrong to be playing at war when there is a real war happening at this very moment,” she said. She warned her actors there would be an increased sensitivity to the battle scenes, and asked them to be “mindful of the privileged position that we are in.

“When the scene ends that this is not currently our real set of circumstances,” she added. “Keep in mind the real men and women who are currently fighting for their lives and their homes and use this experience to honor their experience.”

Hugo’s novel is one of just a few works of literature that covers the June Rebellion, and the events that preceded it. Published thirty years after, the author follows the lives and interactions of several characters over a twenty-year period. In his 1998 biography, Robert Graham noted how Hugo was caught in a literal crossfire that June. The wordsmith was in the Tuileries Gardens writing a play when he heard gunfire erupt. Instead of escaping back to his home, he investigated the sounds. Graham said he was halfway down an alleyway when barricades closed him in from both ends. He survived a 15-minute volley of gunfire by shielding himself between building columns.

Roos said Hugo was able to capture real stories of people who lived, fought and died.

‘The story of the students on the barricade may have been lost in time if someone did not write their story,” she said. “We honor their memory and the memory of all who fight for injustice by telling their stories from a place of truth and sensitivity.”

Broadway’s stages reopened last August, just shy of 17 months after the COVID pandemic shut down the arts and entertainment industry. Headlines since have documented how the world’s players have persevered, sequestered from crowds at home. Roos described the same time as the best of times and the worst of times for her actors. She shared how their first in-person rehearsal felt like “Christmas morning” last year. They were further gifted after mask mandates were lifted; seeing their fellow actors’ full performance, with voices and smiles unbridled.

“The past few years have brought all of us closer together as a theater family and challenged us in ways we never could have anticipated,” Roos said. “But these students continue to amaze me and they have continued to persevere through every obstacle put in front of them.

“I hope that the audience comes to enjoy Les Miserables for the sheer beauty and tragedy of the musical itself but also to celebrate these students who have waited years for this very moment, and to finally hear their applause.”

SPOTTED: Bethlehem girls lacrosse moves to 3-0 with 8-7 win over Shaker

State vaccination sites have second booster shots for those eligible