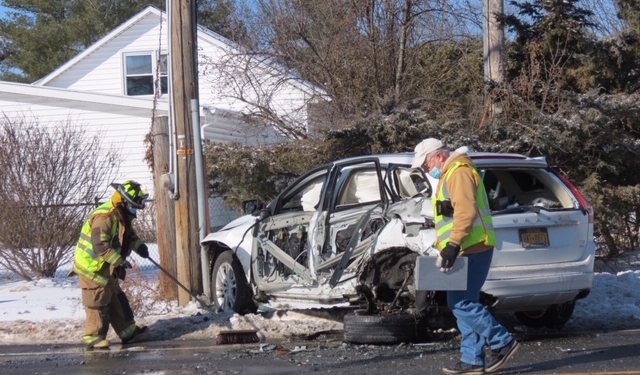 DELMAR – A car traveling at a high rate of speed on Delaware Avenue, near the high school, crashed into multiple cars on Saturday, Feb. 5 leaving a trail of destruction.

At approximately 12:47 p.m. a grey 2005 Acura driven by Antonio Trivellotto, 24, of Schenectady, was travelling westbound when he struck a white SUV near Longmeadow Drive, shearing off the driver’s side doors. Trivellotto hit two more vehicles before spinning out of control near Meyer’s Funeral Home. The sedan left the roadway and hit a tree approximately six feet off the ground, ricocheted across Delaware Avenue and rolled over on the right side (east or west) of the road.

Trivellotto fled the vehicle and was apprehended by Bethlehem police after they tracked his footprints in the snow to Canterbury Lane. While officers were interviewing Trivellotto, he allegedly punched one of the officers in the face. The officer was not injured.

Trivellotto was transported to Albany Medical Center Hospital with injuries sustained in the crash. Condition of the occupants of the other vehicles is unknown.

According to Bethlehem police, an investigation is ongoing and charges are pending.

To open the gallery, click on a photo below or click here if viewing in a news app.