UPDATE: Truck backs into Four Corners’ shop – second time in 13 months the building has been hit – can now reopen 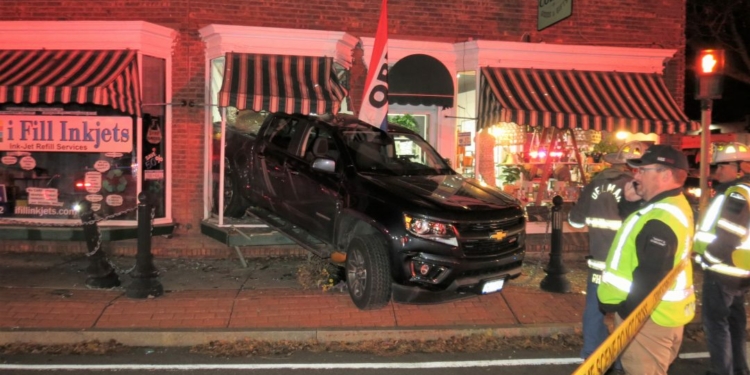 DELMAR – For the second time in less than two years a vehicle has crashed through the front window of a business located at the four corners.

The most recent crash on Nov. 10 involved a pickup truck jumping the curb after the driver stepped on the accelerator instead of the brake at the intersection of Kenwood and Delaware avenues and smashed through the front window and wall of the 5th Corner Goods and Gifts.

“We had all these plans for those windows,” store co-owner Ricky Talmage said as she was standing in a pile of bricks and glass. “We have the best windows for retail in town. Now, it is just a mess.”

The 5th Corner owners just opened the store two months and one day before the crash and are preparing for a busy season. “We have tons of stuff coming in for the holidays,” Talmage said. “We are just going to make this work.”

UPDATE: According to Talmage, they are tentatively planning to reopen the store on Friday, Nov. 19. Contractors completed the work to stabilize the column and wall over the weekend and the town did inspect the work.

“We did inspect yesterday (Monday, Nov. 15),” building inspector Justin Harbinger said. “The apartment above and the business can be occupied now. All of the temporary modifications for the safety of the structure were made over the weekend and they were in contact with us along the way.”

At 5:42 p.m., the store was still open when an 89-year-old Prattsville man traveling southbound on Kenwood Avenue approached the light and realized he could not make the right-hand turn on to Delaware Avenue due to the construction taking place. He stopped and put the 2019 Chevrolet Colorado in reverse to back up, but his foot allegedly slipped from the brake to the accelerator. The vehicle crossed the northbound lane and over the curb and crashed through one of the front windows of the store at 395 Kenwood Ave.

No one was injured in the store or the vehicle, but the store did sustain heavy damage.

When the truck came through the window, it also damaged the brick column between the window and the front door and broke the other, large front window.

According to the owners, an engineer determined that the front wall is structural and would have to be repaired. They said the building’s owner, a contractor and the town are working to get the store open again.

The Town of Bethlehem Building and Codes Department staff evaluated the building Wednesday, Nov. 10 and determined that the store and the apartment above it could not be occupied until the building owner brought in a structural engineer to evaluate the damage.

“An engineer has to take a look and determine if the hit caused any structural damage,” Harbinger said. “There is a prohibition of occupancy until that time, but once they have the clearance, they will be able to open.”

According to Harbinger, there is one tenant in the apartment above the store who cannot return, but is staying with friends.

On Friday, Nov. 11 the owners and a contractor had a plan to shore up the windows, column and door by adding structural steel. The windows will be replaced with wood temporarily until the entire frames are rebuilt.

“We hope that it can be done quickly and be able to reopen as early as late Monday (Nov. 15) if the work can be done and the town approves,” Talmage said. “We may not have those windows, but we can re-open.”

The store owners are still taking orders on their online store, 5thcornergoods.com, during the disruption.  The glass, brick and car parts were cleaned up as of Friday afternoon and the community is rallying around the business

“We have received a lot of support from the community,” Obernesser said. “We have had many online orders for gift cards. This community is really great.”

The owners are considering asking the community for help with ideas for the windows. They may paint the wood with a scene and use the inside wall to display goods.

Building has an accident history

One year earlier, almost to the day, a vehicle failed to negotiate the turn at the light, jumped the curb and smashed into the windows two businesses down from the 5th Corner shop. The damage to the balusters and chain fence that separates the sidewalk from Kenwood Avenue from that crash was scheduled to be repaired this week by the town Highway Department.

That will most likely not happen, since there is now more damage to the posts and chain.