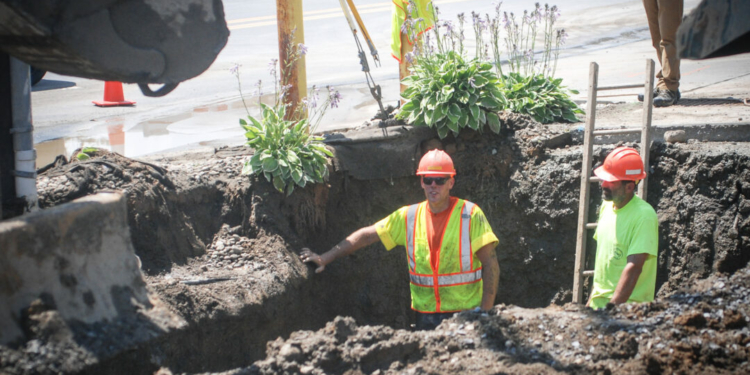 DELMAR – The Town of Bethlehem will close one lane of Kenwood Ave. on Nov. 1 from the Four Corners to the Keybank parking lot for two weeks to repair a failing sewer line.

“About a year ago we noticed a depression in the pavement on that stretch of Kenwood Ave and we got a sense that something was going on,” Bethlehem Commissioner of public Works George Kansas said. “We confirmed it was a sag in the pipe after we did an video inspection.”

The pipe was installed in 1929 and the sag could cause blockages from fats, oils and other materials from the properties nearby.

“It is also a concern that because of the sag, it could jeopardize the seam in a joint and let dirt or ground water in,” he said. “You can get a catastrophic failure that can create sinkholes similar to the one they had on Madison Ave in Albany recently. This will prevent that.”

Kenwood Ave eastbound will be closed and rerouted to Adams Place, but the westbound lane will remain open during the process. Delaware avenue and Kenwood Ave on the north side of the four corners will not be closed.

Kansas and Town Supervisor David Van Luven walked around the area Tues. to inform businesses of the closure due to the short notice.

“It is something that we need to do as soon as we can to prevent a failure and a major disruption,”  Kansas said.

The solution to the problem, according to Kansas, is to replace the sagging section, which is about 65 feet, then insert a sleeve inside the pipe along entire span between the manhole on Delaware to the one by Adams Place.

“We will sleeve both the new and old sections to make one continuous piece,” He said.

Below is the map of the traffic pattern.

Kansas said that the project will take longer than usual because there are both a natural gas line and communication cables buried nearby.

“It is a deep sewer line,” He said. “We will have to really be careful not to disrupt anything else.”