A jagged road divided by ideas 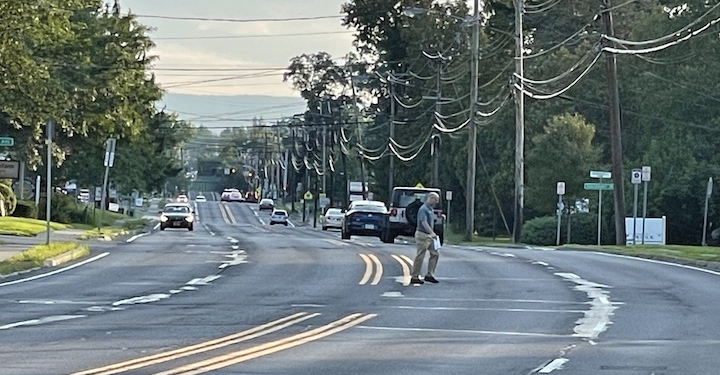 DELMAR — Fewer topics have made more headlines than the proposed $5.2 million Delaware Avenue Complete Streets and Road Diet referendum that’s to go before town voters as Proposition 6 on Tuesday, Nov. 2.

In December, 2017, the Town Board considered the findings of the study and input from residents and businesses, and voted to move forward with the complete streets project.  In 2019, the town was awarded a federal grant for $2.91 million to complete design work and to cover a portion of the construction costs.  The state Department of Transportation also committed $1.56 million for paving.  The town will would cover 20 percent ($728,000) of the $5.2 million total cost for the 1.3 mile long project.

As it will read on the ballot, Proposition 6 will ask voters;

Shall the bond resolution adopted by the Town Board, Town of Bethlehem  on July 28, 2021, authorizing the Town of Bethlehem to (a) undertake the Delaware Avenue Complete Streets and Road Diet Project, at a maximum estimated cost not to exceed $5,200,000, and (b) finance such Project by the issuance of bonds and/or notes of the Town in the aggregate principal amount not to exceed $5,200,000, with such amount anticipated to be partially offset by the receipt of federal and state grants, and other sources of funds, currently estimated to equal approximately $4,472,000, be approved?

Arguments over its merits and determinants grew to a fervor as the matter of approving state and federal funds for the project came to a head this year. The idea of introducing a road diet to Delaware Ave was first floated during John Clarkson’s administration. In 2016, the concept under a Complete Streets model based on federal transportation policy often referred to as a road diet.

The current four-lane stretch of Delaware Avenue is a result of an expansion project from sixty years ago. Pockets of Bethlehem were booming with residential development. At the same time, the high school and several of the district’s elementary schools moved and expanded to accommodate the influx of people. In 30 years, the town population more than doubled from 9,800 people in 1940 to 23,000 in 1970.

There are five traffic patterns that have been discussed for the 1.3-mile corridor between the Albany City Line and Elsmere Avenue.

One involves a full “1-1-1” road diet that reduces the traffic pattern to two opposing lanes accompanied by a turning lane.

The second, least spoken of, concept is a “half corridor” diet that proposes a divide at Delaware Plaza, where reduced traffic lanes would be introduced on one side, and four lanes would remain on the other.

The next two patterns, a “2-1-1” model, allows for two traffic lanes flowing in the same direction on one side, and one lane on the other, with an accompanying turn lane.

The final option is to keep the present traffic pattern.

The traffic pattern has yet to be decided and won’t be until after another engineering assessment is made.

In recent meetings, a 1-1-1 pattern involving two traffic lanes and a bike lane has been lobbied by residents who live off the roadway. Business owners seeking a compromise away from the full road diet have pushed for a 2-1-1 pattern.

The most vocal voices clamoring on either side are the residents who live just off Delaware Avenue and the business owners who work there.

On October 15, a group of Bethlehem business owners fired a press campaign against Proposition 6. The list comprised 37 businesses, including Delaware Plaza and My Place and Company.

My Place and Company co-owner Jim Giacone has involved himself in the discussion since the first public forum was held at Town Hall in 2017. Since then he has appeared before Town Board in several meetings to push for a 2-1-1 traffic pattern. He and other business owners have said they fear a road diet will choke potential customers away.

“It was never political,” he said.

They continue to argue that Delaware Avenue is not a residential street, it is a commuter corridor under which businesses have established themselves since the roadways expanded to four lanes in the 60s. Reducing lanes now, they say, will cause traffic congestion and lead to motorists to choose alternative routes and flood neighboring residential streets.

Deborah Nolan Murray, managing director of Delaware Plaza, recalled how the 2000 Normanskill Landslide that led to Delaware Avenue being closed between the Albany City Line and the plaza affected businesses. In the six months the road was closed, businesses reported losses between 40 to 60 percent. Her family, who has owned the plaza for more than 40 years, is “very concerned” with the full road diet.

“I wonder if it affects all these businesses, are you going to be okay sharing that tax burden with everybody also in the town of Bethlehem?” she asked. “I know what we pay for property tax, and school tax. So, is that going to shift as well?”

Supervisor David VanLuven said he has met with business owners and listened to their concerns several times in the five years. He contends that documentation supports commercial success in the communities that have adopted the Complete Streets model, and that it’s only a “small group” that opposes the proposition.

Over the summer, Bethlehem Community Streets established itself online as a community organization by launching social media channels and a corresponding website. Organizers have since shared a continuous visual presentation supporting the road diet referendum with testimonials, videos and diagrams. A spokesperson for the organization has described it as “a group of people (residents, not electeds) who are working on this as a collaborative effort.”

The website educates visitors on the proposed 1-1-1 road diet concept through a video, demonstrating how it would work on Delaware Avenue. It shares diagrams borrowed from the 2017 feasibility study from Creighton Manning Engineering, and testimonials collected from residents sharing harrowing stories of automobile accidents and wishes for safer streets.

Since the website’s launch, it has garnered support from local groups including Capital Bicycle Racing Club, Bethlehem Healthy Kids, and the Bethlehem Bicycle and Pedestrian Committee. Individual support is documented as well attributed by residents identified by just their first name.

In a recent Town Board meeting, Giacone alluded to private meetings involving Town Board members and supporters of the road diet. VanLuven refuted the claim. Residents on social media have scrutinized over the Democrats involvement with the community group, growing wary and doubting that it was a genuine community movement.

Albany County Legislator and Bethlehem Democratic Committee Chairperson Joanne Cunningham is named as a supporter on the group’s website, but identified only by her first name. Other supporters include BDC Committee members Bill McCabe and Jeremy Snyder. Other BDC members working with the group, or who have in the past, includes Gary Ginsburg and Melissa Gold.

In the group’s most recent video presentation, Snyder is open about his ties with the BDC, as well Bethlehem Tomorrow and the Bethlehem Comprehensive Plan Update Committee.

“I volunteer for these organizations because I believe in making Bethlehem and even better place to live then it is now,” Snyder said. “I know we can do better on Delaware Avenue.”

David VanLuven, a Democrat but listed as a committee member, said he’s not involved with the community group.

“I know there’s a community effort, but the Town Board hasn’t been involved,” he said.

Albany’s Madison Avenue went through a similar transformation proposed for Bethlehem. Four lanes of traffic were reduced to two. A central turning lane was installed, as were bike lanes, from South Allen Street to Lark Street. ADA-compliant pedestrian crossings were added, along with walk singles displaying countdown times.

At the time Albany finished the project in 2018, similar projects were planned throughout the Capital District. Guilderland, Menands and Schenectady each were preparing or working towards similar traffic calming measures. Madison Avenue, however, continues to be used as the preeminent example.

What makes Delaware Avenue different from the Albany city street is the number of access points along its road. Despite being used as a commuter road, it has several curb cuts for driveways, parking lots and side streets that conflict with the flow of traffic. There are approximately 73 driveways and 14 unsignalized side street intersections within the study area.

The conflict is worse between Elsmere Avenue and Delaware Plaza according to the report. On a scale similar to a school report card, the Capital District Transportation Committee gives that stretch of road an E. The roadway between the mall and Normanskill earned a D grade.

Opponents to designating bicycles lanes onto Delaware Avenue point to the roadways many curb cuts. Republican Jim Foster, who also volunteers as a firefighter with the Elsmere Fire Department, has been against the road diet since before he joined the Town Board four years ago. He voted against the referendum earlier this year and said he would vote against Proposition 6. He said introducing bicyclists on Delaware Avenue is “courting disaster.”

The engineer’s report suggests Delaware Avenue has an 80 percent higher accident rate than similar roads across the state — a point former deputy commissioner for the state’s transportation department made in public comment.

“These are real engineering facts, not alternative facts,” said Henry Peyrebrune, who retired from the state’s transportation department after 33 years. Through the data collected from the feasibility report, and from the Federal Highway Administration, he said a full road diet could reduce the accident rate by 26 percent.

“It’s my experience that just these facts alone — just the accident reduction — would justify moving ahead with this project. Not only should you, you must, I believe, in order to protect public safety.”