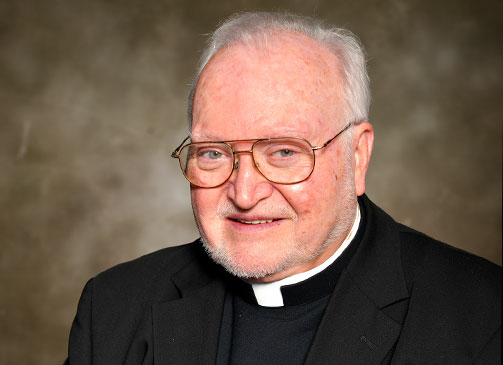 DELMAR — The Roman Catholic Diocese of Albany removed Father Gregory Weider from public ministry on Aug. 14 after a change in diocese policy in response to Child Victim Act lawsuits alleging sexual abuse of minors and two other past claims of abuse in 2004 and 2010.

Weider, 84, served at St Thomas the Apostle in Delmar as an associate pastor from June 1971 to July 1977 then at St. Mary’s in Coxsackie until March 1982. He retired from full-time ministry in 2010 and has recently served as the sacramental minister at Sacred Heart in Margaretville and St. Anne’s in Andes, according to a release from the diocese announcing his removal. Weider was also the National Chaplain for the National Catholic Committee on Scouting in the early 1980s.

A CVA lawsuit filed in state Supreme Court in Albany County on Aug. 7 alleges that Weider sexually assaulted and sexually abused a 14-year old boy from 1977 until 1978 at St. Mary’s. However, prior to the Aug. 14 deadline established under the Child Victim Act, this lawsuit would not have triggered a suspension, removal or even a review by the diocese since it was a civil lawsuit and no complaint was made directly to the diocese or the district attorney.

In 2019 the state Legislature passed and governor signed the New York Child Victims Act into law allowing a two-year window removing statute of limitations on sexual abuse that happened when the victim 18 or younger. To date more than 325 suits have been filed against the Diocese of Albany.

The diocese’s policy for criminal abuse cases brought to its attention — either directly from victims or through law enforcement — are now sent immediately to the appropriate district attorney, said Mary DeTurris Poust, director of communications for the diocese.

Poust explained that based on the memorandum of understanding it established in 2002 and updated in 2015, the diocese does not proceed with an investigation until the DA returns the case.

“At that point, an independent investigation takes place and the Diocesan Review Board begins its study of the allegations and the accused. Once the investigator completes his or her findings, they are presented to the Review Board, which then makes a recommendation to the bishop of Albany.” Poust said. “ The bishop then weighs all the information and renders a final decision.”

This process did not apply for CVA or civil litigation brought against a staff member, parish or an entity under the control of the diocese because under the policy the victim has to contact the diocese or DA directly to trigger an investigation. When the diocese or DA is contacted directly, the diocesan Victim Assistance Coordinator reaches out to the survivor’s council to offer to coordinate support services.

“The Review Board would not be engaged in a strictly CVA case unless the survivor makes that choice,” Poust said.

Under the previous policy, the accused abuser was asked by the bishop to voluntarily step away from the ministry or position until the case was resolved. That changed with Weider since he had past allegations or incidents.

According to diocesan officials, there are two abuse complaints against Weider, one in 2004 and another in 2010. A review of his files, in light of a recent CVA claim, led to the discovery of the earlier complaints, Poust said in an emailed statement.

“Because it is unclear how either of those matters were resolved, they are now under investigation. Bishop Scharfenberger has asked the independent Diocesan Review Board to review the original documentation and make a recommendation,” she said. “It has long been diocesan policy to remove any clergy with a complaint under investigation, which is what triggered Father Weider’s placement on administrative leave pending the outcome of the investigation.”

Other priests recently accused of sexual abuse in a CVA lawsuit the cases are also now being reviewed by the review board. Rev. John Varno and Rev. Vincent Ciotoli stepped aside in August and will not be in public ministry or present themselves as priests until the investigations are complete.

“Bishop Scharfenberger has made the decision to change that policy in order to be even more transparent. It’s a fine line the Diocese must walk in order to respect the rights of those who have been accused in civil lawsuits; releasing these names while the legal process moves forward does not indicate a judgment on the credibility of the claims,” Poust said. “At the same time, Bishop Scharfenberger wants to the Diocese of Albany to be a leader in transparency, and he continues to review and adapt policies in order to rebuild trust and encourage healing.”

Weider had been serving as a sacramental minister for two different congregations in Delaware County. As of Saturday, Aug. 14, Weider is not allowed to officiate at sacraments or wear clerical garb. He is also not to present himself as a priest. He retired from full-time ministry in 2010.

Weider was named in a complaint filed in state Supreme Court in Albany County dated Saturday, Aug. 7, which alleged he had sexually abused a teenager twice a week for approximately one year, starting in late 1977 when the victim was 14 years old. Weider began his role as pastor of St. Mary’s Roman Catholic Church in Coxsackie in October of that year.

The victim was then a foster child placed in the care of a Catholic family who went to St. Mary’s. His foster family had introduced him to the congregation and he spent more time with Weider through recreational, educational and religious activities. The alleged abuse took place within the rectory at the parish. According to the claim, Weider told his victim that no one would believe him if he told anyone.

The victim has asked the court to remain anonymous. The claim does use traditionally male pronouns of he and him throughout.

“I do not want the facts and circumstances of the abuse I experienced to be known to my friends and especially to my family,” the victim stated in a written request to the courts to remain anonymous. “If my name were publicly disclosed in this lawsuit, I would suffer further shame, guilt, and embarrassment from my sexual abuse. I have friends and family who do not know about the abuse I experienced as a child.”

The victim ultimately told his foster mother of the abuse. The claim does not state whether the family confronted Weider or removed themselves from the congregation. It does, however, state that the abuse went unreported under “the dominating culture of the Catholic Church.”

Since his ordination in 1963, Weider has served at several parishes including St. Thomas the Apostle. He has also served at Blessed Sacrament in Mohawk; St. Anthony in Schenectady; St. Agnes in Cohoes; St. Mary’s in Coxsackie; Holy Cross in Albany; Sacred Heart in Watervliet; and Holy Trinity in Schaghticoke, which was the merger of St. John the Baptist and Our Lady of Mount Carmel in Johnsonville, and St. Monica, Valley Falls.

Details about the two other complaints in 2004 and 2010 referenced in the diocese statement are unknown. Spotlight News has asked the diocese for more information on the two cases, but have not yet received an answer.

Boy Scouts – Weider and other accused abusers as chaplains

Weider was heavily involved with the Boy Scouts of America beginning in the early 1970s and continued through at least 1986. This was at the diocese and national level through the National Catholic Committee on Scouting

According to its website, “(NCCS) is a church committee of concerned Catholic lay people and clergy who see as their mission the constructive use of the program of the Boy Scouts of America as a viable form of youth ministry with the Catholic youth of our nation.”

According to diocese records, Weider served as the Diocesan Chaplain for Scouting beginning in 1972 through 1980. His national role with the NCCS began when he was elected to be the Associate National Chaplin in 1980 for a three-year term. According to NCCS bylaws, that position elevates to the National Chaplain automatically for an additional three-year term which he served until 1986.

His duties included screening and choosing priests and seminarians to serve at the 137,000 acre Boy Scout Philmont summer camp in New Mexico, other Boy Scout camps and for Jamborees:

According to Scouting magazine, 42 percent of the youth members of scouting were enrolled in units that belong to the NCCS and the other religious committees in 1981.

All priests named diocesan chaplain after Weider were accused abusers

During Weider’s tenure with the scouts there was at least one claim of abuse against him, but he was not the only Albany Diocese priest accused of abuse to hold the title of Diocesan Chaplain for Scouting.

In 1981 Father James Rosch was appointed by then Bishop Howard Hubbard to be the next chaplain through 1994. He was assisted by Father Charles Gaffigan until 1985.

Rosch was removed from ministry in 2002 and was placed on the diocesan list of offenders in 2015. He is also named in two current CVA lawsuits alleging abuse that took place between 1992 and 1993 at St. Madeleine Sophie in Schenectady and in 1975 and 1976 at St. Joseph’s in Scotia.

Gaffigan has two CVA lawsuits accusing him of abuse in 1974 at St. Michaels in South Glens Falls and from 1992 and 1994 at Holy Infancy in Lake Luzerne.

Hubbard then named Father Joseph Schuck in 1994 to the position.

Schuck was a priest in the Diocese of Brooklyn through 1983 but was put on leave and released by the Brooklyn Diocese. He was then picked up by Albany Diocese and served from 1983 until his removal by Brooklyn in 2003 for abuse in the 1950s and was added to their diocesan list of offenders. He does not, however, appear on the Albany diocesan list of offenders as a priest who was removed and served in the Albany Diocese.“

Schuck’s status on the Diocese of Brooklyn’s list was recently brought to the attention of diocesan leadership, and the process for including him on our list is in progress,” Poust said.

Schuck is the last priest named as chaplain for the Boy Scouts. The Diocese now names deacons to that role.

There is no record of Weider serving as a leader with Troop 71 at St Thomas or other local troops, however, Troop 71 was chartered in the late 1970s by the Parish Council. The process was started while Weider served as associate pastor and he was an advocate for parishes and the diocese chartering scouting units. He explained how scouting was part of the parish in an interview for the Boy Scouts national magazine Scouting in a September 1981 article.

“I think the scouting coordinator should act with the Catholic committee as well as represent the church to the scout council, and Scouting to the Parish Council. The coordinator should be a member of the Youth Ministry Program of the parish,” he said.