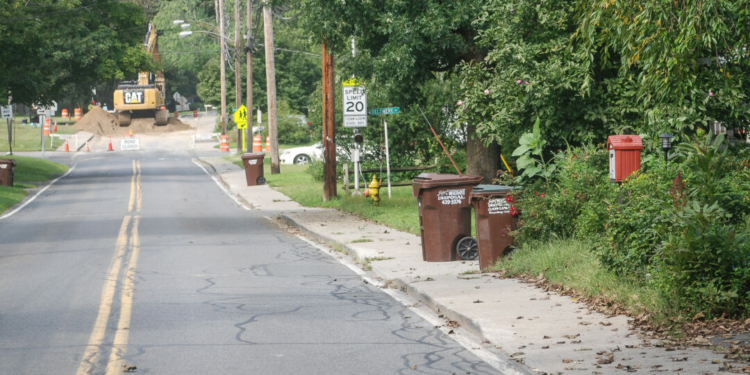 Kenwood Ave section where a runner was hit by a passing truck on Monday.

DELMAR — A 46-year-old Delmar woman was struck by the side mirror of a passing truck as she was running on the sidewalk along Kenwood Avenue early Monday morning, according to Bethlehem police.

The woman was running towards the Four Corners intersection of Kenwood and Delaware avenues at approximately 7:40 a.m. She was on the sidewalk opposite the Bethlehem Cemetery, just a few houses down from the Bethlehem Central Middle School, when she was hit in the back of the head. She suspects she was hit by the side mirror of a passing pick-up truck.

“The vehicle in the case was described as a white pickup,” stated Bethlehem Police Cmdr. James Rexford, adding that an investigation is on-going.

She was transported to St. Peter’s Hospital where she was treated for injuries to her head. She was later released.

It is this newspaper’s policy to not divulge the names of victims in news stories. Though this victim has gone public on social media, we have extended to her the same courtesy.

Contemporary sidewalks are installed with a road verge separating it from the road by a few feet. The sidewalk along the 300-block of Kenwood Avenue, however, was installed with no verge and no shoulder. The neighborhood dates back to the 1930s. The middle school was erected in 1932 when it was built as the newly founded school district’s high school. There’s only 3 inches between the white pavement marking defining the roadway, and the sidewalk where she was hit.

“I was running down Kenwood Ave. towards the Four Corners on the sidewalk because there is no shoulder on the other side of the street where I would normally run against traffic,” she said. “There was a young man walking his dog coming towards me on the sidewalk so I moved over to the left but still on the sidewalk.”

She said she does not remember being hit, just being on the ground and bleeding.

“The two neighbors were great,” she said. “One literally gave the shirt off his back to stop the bleeding… We only saw a white truck and not much else. It happened so fast.”

The struck pedestrian expressed her concerns over the upcoming school year which is to start on Thursday, Sept. 9. Her daughter is to attend the middle school this fall.

“School starts in a little more than a week and I usually would encourage my daughter to walk to school, but I think I am going to have her ride the bus,” she said. “This is a real safety issue. There are lots of children on this road.”
The Bethlehem Police Department obtained and reviewed video surveillance footage from the middle school. Police said multiple white pick-ups were observed travelling on the road around the time of the incident. They did, however, take note of a larger, white Dodge Ram 2500 or 3500 series model pick-up truck with extended mirrors.

The Bethlehem Police Department asks anyone who had witnessed the incident to call 518-439-9973.