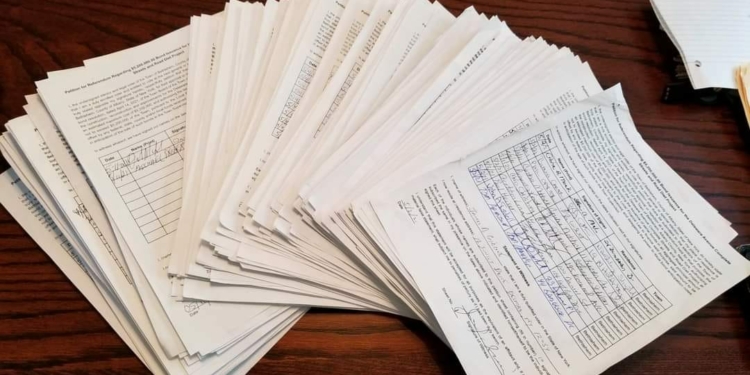 All but $728,000 of the proposed cost has state and federal monies earmarked for the project.

VanLuven shared the suggestion over social media after the Town Board meeting’s agenda was posted online last Friday. He’ll make the suggestion official once he speaks to the Board tonight, Wednesday, June 9.

If approved by the Town Board, the referendum would be added to the ballot as part of November’s General Election.

“I believe it is important for as many voters as possible to participate in the referendum, and history has shown that the turnout for general elections is significantly higher than for special elections,” VanLuven stated in an email to The Spotlight. “The November 2 date is therefore better for our community.”

The board approved a bond resolution for the project by a 4-1 vote in April. Board members also approved purchasing the design services of CHA Companies in the amount of $556,000 that same evening.

However, a petition of nearly 1,500 signatures from town residents was submitted to Town Hall last month. The petition — more than 180 pages — forced the permissive referendum to be decided by a public vote. When to hold the vote, is the next question.

Outside of the General Election, which is managed by the Albany County Board of Elections, the Town is permitted to hold a special election. VanLuvem’s argument against that option is a subject of cost.

Road diets reduce the number of lanes reserved for motorists so as to address issues surrounding safety, aesthetics, or to accommodate pedestrians and bicyclists.

The Town has yet to decide how to reline the highway. One option is to convert the existing four-lane road to two, opposing traffic lanes with a middle two-way left-turn lane. Another is to continue allowing two lanes for inbound traffic from Albany while reducing outbound traffic to one. There is a third option — leave the roadway as is.

A clear divide between opposing views was evident in April when board members listened to public comments regarding the proposal.

Many in favor lived on neighborhood streets immediately connected with the busy thoroughfare. Those opposed were the business owners whose storefronts depend on the motorist traffic.

The current four-lane stretch of Delaware Avenue is a result of an expansion project from sixty years ago.

Crieghton Manning’s 103-paged report documents 213 accidents along the 1.3-mile corridor over a five-year period. The engineer’s report suggests Delaware Avenue has an 80 percent higher accident rate than similar roads across the state.

Store owners warned the road diet could lead to an exodus of business along the Delaware Avenue corridor, which would trickle down to less support going to community organizations.

Albany’s Madison Avenue went through a similar transformation. Four lanes of traffic were reduced to two. A central turning lane was installed, as were bike lanes, from South Allen Street to Lark Street. ADA-compliant pedestrian crossings were added, along with walk singles displaying countdown times.

FROM THE EDITOR’S DESK: What are your credentials?