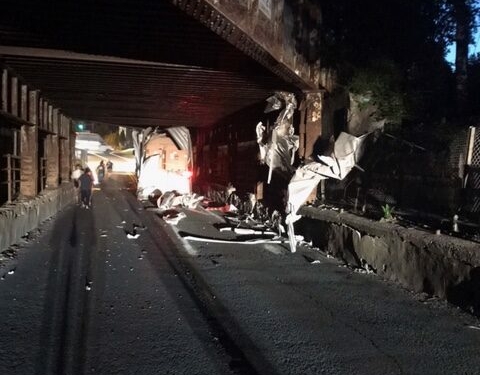 SLINGERLANDS — A tractor-trailer found itself wedged until the New Scotland Road Rail Trail Bridge last night after the driver found himself lost.

Rolando Carcases Ortiz, 57, was heading toward I-90 when he said he found his way into Slingerlands. Ortiz approached the bridge, which has a clearance of 11 feet, 2 inches, and scraped off the top of his 13 foot, 6-inch trailer. Ortiz told officers he did not see signs indicating the bridge’s height.

The truck was cleared from the bridge around 3 a.m. Friday, and upon inspection, the truck was found to be in violation of several laws in the Title 49 of the Code of Federal Regulations that governs commercial vehicle operation. Violations include failing to obey a traffic control device and a logbook violation.

The bridge was inspected by members of New York State Department of Transportation and Albany County Public Works and cleared for use.