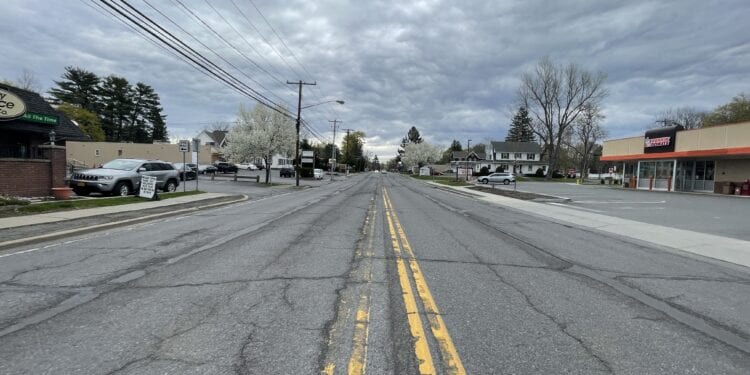 DELMAR — There’s a clear divide between opposing views on the proposed Delaware Avenue road diet project, and it could come down to a vote should enough signatures be collected.

The Bethlehem Town Board listened to several residents over their opinions regarding the Delaware Avenue Complete Streets and Road Diet Project first proposed in 2017. Many in favor lived on neighborhood streets immediately connected with the busy thoroughfare. Those opposed were the business owners whose storefronts depend on the motorist traffic.

The town has yet to decide how to reline the highway. One option is to convert the existing four-lane road to two, opposing traffic lanes with a middle two-way left-turn lane. Another is to continue allowing two lanes for inbound traffic from Albany while reducing outbound traffic to one. There is a third option — leave the roadway as is.

The town first had to pass a $5.2 million bond resolution to fund the project. The money promised by the state and federal levels — all but $728,000 of the proposed cost — are paid later to reimburse the town.

The town board approved a bond resolution for the project by a 4-1 vote at its meeting on Wednesday, April 14. By the same vote margin, it also allowed for the design services of CHA Companies in the amount of $556,000. In terms of any discussion over money relating to the project, Jim Foster, the board’s lone Repubican, voted no.

The bond resolution, under finance law, is subject to permissive referendum. Foster pushed to have the referendum go before voters. His motion, however, was not supported by a second board member, preventing the board from voting either way. The bond referendum won’t go in front of voters unless the town board receives enough petitioned signatures in less than 30 days.

Albany’s Madison Avenue went through a similar transformation proposed for Bethlehem. Four lanes of traffic were reduced to two. A central turning lane was installed, as were bike lanes, from South Allen Street to Lark Street. ADA-compliant pedestrian crossings were added, along with walk singles displaying countdown times.

At the time Albany finished the project in 2018, similar projects were planned throughout the Capital District. Guilderland, Menands and Schenectady each were preparing or working towards similar traffic calming measures. Madison Avenue, however, continues to be used as the preeminent example.

The current four-lane stretch of Delaware Avenue is a result of an expansion project from sixty years ago. Pockets of Bethlehem were booming with residential development. At the same time, the high school and several of the district’s elementary schools moved and expanded to accommodate the influx of people. In 30 years, the town population more than doubled from 9,800 people in 1940 to 23,000 in 1970.

Crieghton Manning’s 103-paged report documents 213 accidents along the 1.3-mile corridor over a five-year period. Seven involved bicyclists, while two included pedestrians. In terms of percentages, 3 percent of these accidents involved those on bikes and another 1 percent included those on foot. Of those same number of accidents, 37 happened at two traffic signals; 26 at Elsmere Avenue and 11 at Delaware Plaza.

The engineer’s report suggests Delaware Avenue has an 80 percent higher accident rate than the similar roads across the state — a point former deputy commissioner for the state’s transportation department made in public comment.

“These are real engineering facts, not alternative facts,” said Henry Peyrebrune, who retired from the state’s transportation department after 33 years. Through the data collected from the feasibility report, and from the Federal Highway Administration, he said a ful road diet could reduce the accident rate by 26 percent.

“It’s my experience that just these facts alone — just the accident reduction — would justify moving ahead with this project. Not only should you, you must, I believe, in order to protect public safety.”

Several supporters of the road diet shared stories of neighbors suffering automobile accidents, while others spoke of worrisome school day walks with their children to Elsmere Elementary School.

“So why do we need the complete streets project?” Snyder asked rhetorically. “Well, we don’t need it. We want it.”

Other business owners complained they received no communication from the town about the road diet. The town has argued that after passing a complete streets resolution in 2016, it has hosted several public meetings, sent approximately 800 mailings to residents, and that the topic was covered by local newspapers including The Spotlight.

Soon after the meeting, the pandemic hit. Shutdowns and reduced foot traffic, according to the New York State Association of Counties, caused the 57 counties outside of New York City to lose more than $720 million from lower sales and hotel occupancy taxes, and lost gaming revenues. Now, Giacone said, the idea of introducing a road diet after 2020, “it’s more troublesome and we’re more nervous.”

Store owners warned the road diet could lead to an exodus of business along the Delaware Avenue corridor, which would trickle down to less support going to community organizations.

Deborah Nolan Murray, managing director of Delaware Plaza, recalled how the 2000 Normanskill Landslide that led to Delaware Avenue being closed between the Albany City Line and the plaza affected businesses. In the six months the road was closed, businesses reported losses between 40 to 60 percent. Her family, who has owned the plaza for more than 40 years, is “very concerned” with the full road diet.

“I wonder if it affects all these businesses, are you going to be okay sharing that tax burden with everybody also in the town of Bethlehem?” she asked. “I know what we pay for property tax, and school tax. So, is that going to shift as well? When you shift the whole community of Delmar, and where we shop, and how we get there?”