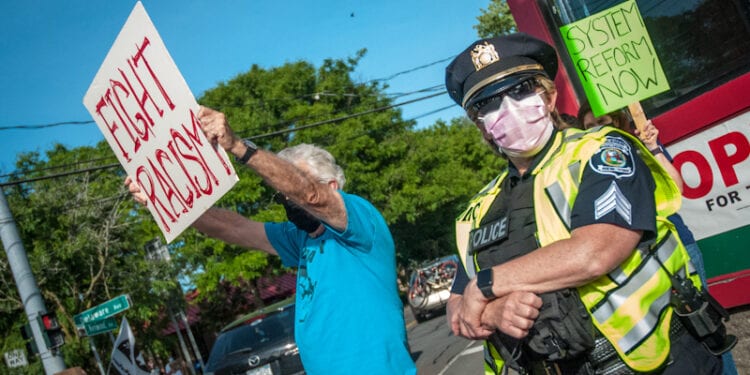 In her chapter of the town’s historic police reform document, Bethlehem Police Chief Gina Cocchiara stated her department is “very different” from the one she joined in 1998, but acknowledges more changes can be made.

The Bethlehem Town Board is expected to adopt its Police Reform & Reinvention Collaborative Plan tonight, Wednesday, March 24, at 7 p.m.

“While the following pages are intended to meet the April 1, 2021 deadline established by Governor Cuomo, they are by no means the completion of the effort to address the challenges identified within them,” stated Town Supervisor David VanLuven.

Within the 109-paged document is an executive summary, preceding the words of both the town’s supervisor and police chief, suggesting various improvements.

The document, posted online last Friday, is the culmination of a comprehensive law enforcement effort directed by Gov. Andrew Cuomo. The governor’s office mandated the communities structure such a plan in last June’s executive order, following the controversial death of George Floyd under the hands of police in Minneapolis.

The document comes before the board less than two weeks before the governor’s imposed April 1 deadline.

Cocchiara first made a promise towards police reform once she was first hired to the chief position last August. More than once, she has claimed to be a target of discrimination within the town’s law agency since joining the force in 1989. She has made it a particular point to continue changing the “warrior” culture from within.

“We want guardians, not warriors,” she stated.

Last September, VanLuven presented figures suggesting a disparity between the number of traffic tickets issued to people of color versus the town’s demographics. He shared how nearly 40 percent of all tickets issued by Bethlehem Police Department in 2019 were to people of color, contrasting against the nearly 95 percent are whites who live in town, according to the 2010 census.

The police department later balked at suggesting people of color were targeted. The department was in the midst of transitioning to a new ticketing system, from hand-written to electronic. The department said, the town supervisor did not have a complete record.

Cocchiara, however, did say that under previous leadership the police department used “misguided methods” that “negatively impacted” residents, people of color, and visitors from “less affluent circumstances.”

“Our Police Department now realizes that this enforcement may have negatively affected people from less affluent circumstances, some of whom were people of color,” she stated. “In acknowledging this outcome, we will … do a better job of balancing the needs of public safety…”

Within the committee’s executive summary, nine opportunities for reform and reinvention are identified, the first of which is the creation of a community board to ensure transparency and accountability of the Bethlehem Police Department.

Many of the bullet points touch upon concerns shared across the nation regarding use of force and best to utilize social workers and specialists instead of armed police officers with answering mental health calls.

In one of the committee’s ten meetings, social workers were also discussed as a possible replacement for on-campus School Resource Officers at local high schools. The practice of having on-duty police officers at local schools dates back to at least the early 1980s with the implementation of the DARE program. Though SRO’s are specialized officers who often serve as social workers, community leaders were more concerned with them wearing firearms. By law, on-duty officers are required to be armed.

In direct response to the George Floyd case, and numerous others, the committee suggests mandatory use of officer-worn body cameras and additional training focused on de-escalation, defensive tactics and implicit bias.

From 2015 to 2019, the Town of Bethlehem reports only 16 cases of Use of Force in approximately 16,000 reported calls. Nonetheless, Cocchiara said she would welcome body cameras.

“Black lives matter in Bethlehem – in our government, our schools, and our community – and we are committed to achieving greater justice, equity, and fairness in Bethlehem, not just in words, but in actions,” VanLuven stated.