Historic Bethlehem church to be sold or razed 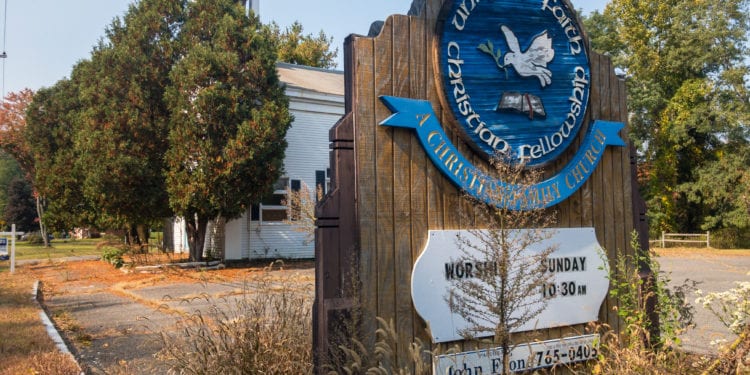 ethlehem residents may recognize the church as they drive pass on the way Crossgates Mall. The vacant church was built in 1835 with familiar names from the past as members of its congregation. An offer is on the table to sell the church to a developer who wants to convert it into a daycare center. Michael Hallisey / Spotlight News

NO. BETHLEHEM — A local woman’s sacrifice to preserve local history is now in the hands of Bethlehem’s Zoning Board.

A For Sale sign stands in front of the Unity of Faith Christian Fellowship at 387 Krumkill Road, where it has been since last July. Judy Frone, and her husband Rev. John Frone, placed the church on the market after watching their congregation shrink. The lack of parishoners made it difficult to maintain the upkeep of the nearly 185-year-old church. Then Rev. Frone died last December.

“Over a year ago, my late husband, John, decided to sell the property in hopes to alleviate some of our financial burdens.” Judy Frone wrote to the town. “Since then we struggled finding a buyer for this unique property that was so near and dear to our hearts.”

According to local history Christopher White, who maintains an online blog titled “Find Your Past,” the church may be the oldest in Bethlehem.

The clapboard church with a bell tower still fixed atop the front was built in 1835 by Rev. John H. Campbell as The First Presbyterian Church of Bethlehem. Then, it boasted a congregation of 53 members. About 30 years later, the church expanded to hold 300 seats.

A modest cemetery remains just off to the side of the church next to one of its parking lots. Within is an obelisk for Jacob Jacobson, who died in 1860. Based on a 1934 survey of the church, there may be more buried underneath the parking lot. The list of names once evident in the cemetery — La Grange, Oliver, Sager — reveal prominent families from the town’s past.

The Frones had purchased the church in 1984 and had continued to use it as a church since that time. Rev. Frone’s name continues to show on the weed-choked sign out front. The hope of handing the church over to another parish disappeared as the Frones fielded offers. None of them took interest in maintaining the church. All expressed interest in razing the old building to make room for apartments or condominiums like those that already neighbor the property. Those offers were declined and the asking price dropped to as low as $200,000.

Since Rev. Frone’s death, his wife has continued to turn down offers from developers. Instead of seeing the church torn down, she has declined offers despite her family’s financial struggles, which she described to the town as “monetarily destitute.” A sale is now pending on the condition the town changes the property’s zoning to allow a child daycare facility.

Patrick and Jennifer Hogan plan to redevelop the property into a daycare facility, a non-permitted use as the town has the 2-acre lot currently zoned. Despite a horrendous windstorm that knocked power out to the majority of the Capital District, the zoning board continued with its public form with barely a quorum of the board. Chairman Dave Devaprasad was unable to log on to the virtual meeting. He presided over the meeting by phone.

“Please give this proposed variance your approval,” wrote Susan Peters, of the Preserve Historic Bethlehem group, “so we can save this piece of history. “We have lost so much of the history in our town already.”

The Hogan’s plan to construct a $1.25 million daycare center on the Krumkill Road property. The plan includes keeping the original structure, while building an addition to the church that wraps around the back. The addition would add approximately another 6,900-square feet to the present 2,500-square-foot church.

The zoning board could grant the variance based on Frone’s financial hardship and her inability to sell the building for its intended use as a chirch.

“I have seen the sketch of the proposed site and it looks beautiful,” wrote Kimberleigh Phelan, who was also in favor of the project. “I think the overall benefit to the neighborhood and community are tremendous.”

No one from the public expressed disapproval to the zoning variance or the proposed plan. The board is expected to provide its decision as soon as its next meeting on Wednesday, Nov. 4.

Sheriff Apple wants to know what you think