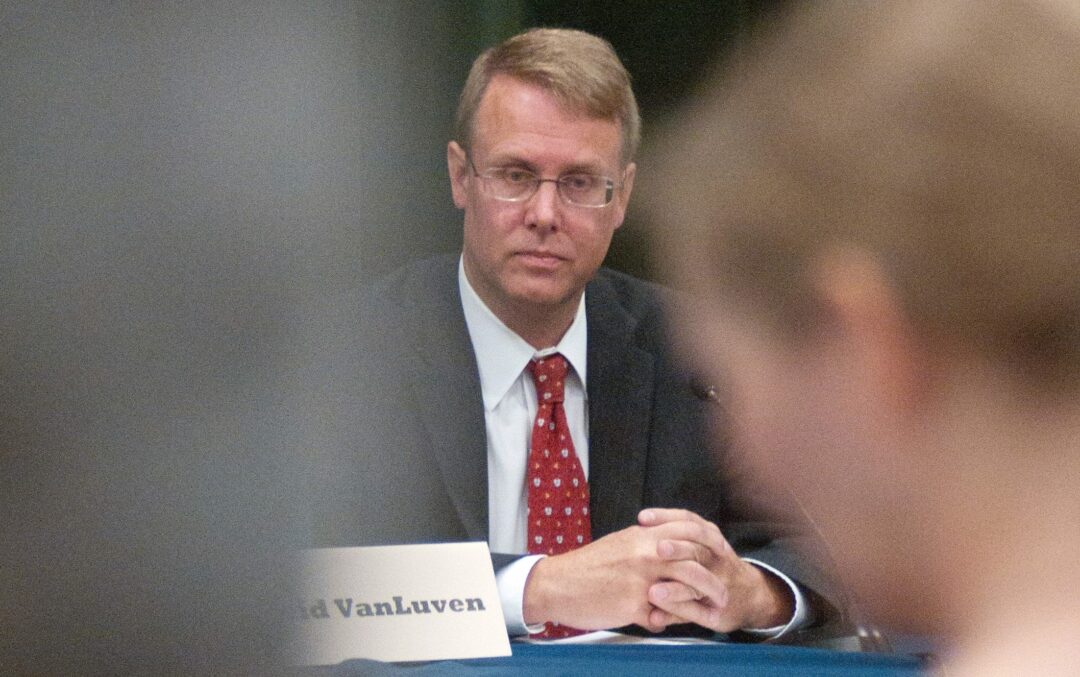 Bethlehem Supervisor David VanLuven, as he appeared during a political forum in October 2017.

BETHLEHEM — With four approving votes, and one abstaining, the Town Board officially named its first female chief on Wednesday, Aug. 26.

Former Detective Sgt. Gina Cocchiara was expected to be named the town’s first female police chief when board members announced their appointment on Tuesday. It was an unusual process initiated by Town Supervisor David VanLuven, who described the decision as too “important” to fall only on his shoulders. When the town last named a police chief 17 years ago, it was based on the recommendation of the outgoing one.

Cocchiara earned the position through her “ambitious vision” for modernizing the police department. Her promotion comes in an acrimonious climate where law enforcement agencies are tasked with building stronger relationships with the communities they police.

“Our community and our expectations of policing have changed over the years, and I look forward to working with Detective Sergeant Cocchiara as our new chief,” VanLuven said. “She’s just the right person to lead the department and its outstanding officers into a new era of policing.”

Cocchiara was among a field of three candidates vying for the top law enforcement position in town. Included in the mix was Sgt. Jim Rexford and Cmdr. Adam Hornick. Hornick was all that remained of a three-man command team that involved then-Police Chief Louis Corsi and Deputy Chief Thomas Heffernan. Both retired from their positions in July, leaving Hornick as the officer in charge since.

“The town board interviewed three exceptional employees for the promotion to Chief of Police in Bethlehem,” Town Board Member Joyce Becker said. “With over 20 years of experience in policing, Gina Cocchiara’s vision of future policing in Bethlehem will lead us as we face challenges and issues. Gina brings to Bethlehem solutions to optimize and implement strategic community-based plans for the tomorrows of our community.”

The appointment bookends weeks of interviews and deliberation, a process scrutinized by residents demanding they be included in the selection process, highlighted by a bipartisan group gathered at Town Hall last Friday afternoon.

Social strife over racial inequity and demands for police reform has shaped policymaking in recent months. In June, Gov. Andrew Cuomo revised Civil Rights Law to allow access to police disciplinary files. On the same day, he mandated police agencies include community leaders in a concerted effort to redefine expectations and share responsibilities regarding policymaking.

“The town board was very impressed by all three applicants and we are fortunate to have all three serving our Town,” Town Board Member Dan Coffey said. “Sgt. Cocchiara has the vision and experience to lead the department at this critical juncture as our police department performs its internal review per Governor’s Executive Order 203.”

Town board members labored over the decision, involving law enforcement experts from neighboring communities to help define expectations for the incoming chief. How those meetings complied with Open Meeting Laws was questioned by Spotlight News.

So, too, were the disciplinary files shared by the town through a FOIL request submitted by this newspaper. Disciplinary action and commendations were requested and shared. Only incidents involving Cocchiara were shared. The town’s interpretation of Civil Rights Law stated that unsubstantiated incidents are exempt from responses. While Cocchiara’s files included approximately 90 pages, including a two-week suspension and a near termination, no disciplinary information was provided for the other two candidates. The board received similar access to files, and one said “that was telling.”

Becker said she spoke with police officers, both in the department and outside, and found how women are often treated while on the force. Those complacent with their current roles are left alone, while ambitious ones are targeted.

“You know, I have never known perfect employees that don’t have nothing that someone could have written or said in their file,” she said. “So, I think that is telling.” She shared compliments for Hornick and Rexford, but was moved by Cocchiara’s vision of reintroducing police officers to local schools to mend relationships with the community. When prompted, she said the board was not swayed by the prospect of appointing its first woman chief.

“No,” she said. “I would be the first to say. … I think her vision was what I wanted to see in Bethlehem.”

The pomp and circumstance expected for the historic event was instead surrounded by expressions of anger and disappointment; not with the decision, but with the selection process and the use of a verbal gaffe by the supervisor.

VanLuven prefaced the appointment to the board by sharing how news of the upcoming vote garnered more than 200 likes and comments on social media. However, many of the residents who asked to be included in the interview process at the last board meeting were not happy when they spoke again on Wednesday. In addition to feeling ignored, they had expressed their disappointment with the supervisor calling one of the town’s more visible activists a “d–k.”

VanLuven used the verbal gaffe towards Xavier Cruz, a member of Bethlehem for Social Justice. Cruz has been critical of VanLuven and Cocchiara in the past, stemming from a meeting in which the activist group invited the supervisor. However, when VanLuven brought Cocchiara to the meeting, it wasn’t well-received by members wishing to speak to the town about police reform.

VanLuven twice broke practice of remaining silent during the meeting’s public comment section, including to direct his apologies towards Cruz.

“I just want to apologize,” VanLuven told Cruz. “I hold myself to a higher standard and I really let myself down. … It was inappropriate and I need to do better than that.”

Cruz accepted the supervisor’s apology but said another one should be extended towards the community.

“I’ve been called a lot worse things by angry white dudes,” said Cruz, who is Latino. “But let’s start with this town government touting an agenda of progress and transparency while making absolutely no effort to embody either. Closed-door decision making without public inclusion is not acceptable.”

The Times Union reported extensively on the exchange in this Aug. 27 article.

The final vote was not as unified as the town’s announcement suggested on Tuesday. Foster, the lone Republican on the town board, abstained from the vote.

“Congratulations, Gina,” Foster said. “Unfortunately, I respectfully abstain to avoid creating any possible appearance of a conflict of interest.”

“During the course of the interview process, a significant other of Gina’s emailed the Board speaking on Gina’s behalf,” Foster said. “That individual had previously made considerable campaign contributions to me, and in light of that fact, and her close relationship to Gina, I didn’t think it appropriate for me to vote on Gina’s appointment.”