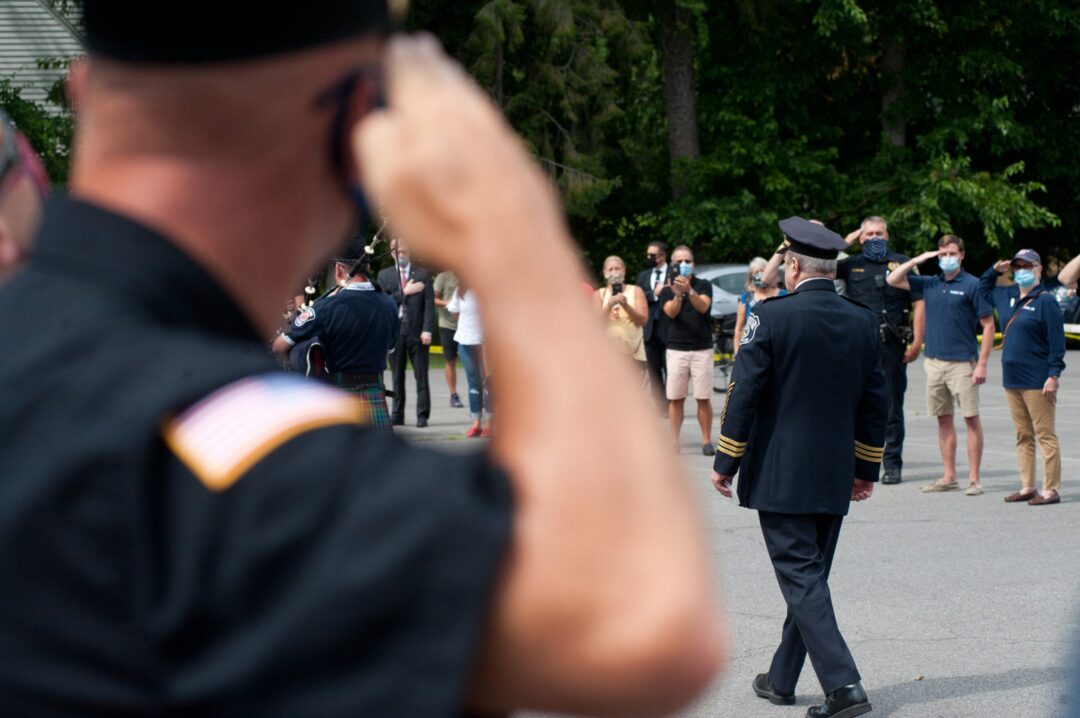 DELMAR — There are three vying for Bethlehem Police Department’s vacant chief position after the town’s top law enforcement officer retired last week. The town board is expected to interview the candidate field in the coming weeks before presenting its choice to the supervisor.

The town is selecting from a list of candidates based on their standings on the current Albany County civil service list. Once the process concludes, either Cmdr. Adam Hornick, Detective Sgt. Gina Cocchiara or Sgt. Jim Rexford will be the town’s next police chief.

When Louis Corsi retired two weeks ago from his police chief role of 17 years, it was the second exodus from the police department’s command team in as many weeks. Deputy Chief Thomas M. Heffernan, Jr. worked his last day a week before. Hornick, the last remaining officer on the three-man command team, is ranking member in charge until the town selects a new chief.

“At the end of the day, the direction is set by the chief, but you don’t do that in an isolated box,” Corsi said during his walking out ceremony two weeks ago. “You do that collectively with your command staff in your department, and more importantly, you do that with the community. That’s where I see this going. That’s where I hope that the next chief will take a moment, just to look at and evaluate. Make a good, informed decision, and then move it forward.”

The absence of both Corsi and Heffernan from the department represents nearly 70 years of collective service experience. Corsi spent 41 years in law enforcement, splitting time with the Town of Coeymans and Albany County Sheriff’s. Heffernan started his career with the State Police before joining Bethlehem nearly 25 years ago.

Hornick was promoted to commander five years ago in order to assemble a command team around Corsi. Though the chief role is a civil service position and eligible candidates are subject to exams, the assumption has been that the next agency head would emerge from this team.

Hornick is a New Scotland native who attended Bethlehem Central. He earned a bachelor’s degree at the University at Albany and later received a master’s degree in public administration from Marist College. Before becoming a deputy with the Albany County Sheriff’s Department, he was a Bethlehem police dispatcher for three years. After one year with the county, he returned to Bethlehem police as an officer where he has served for nearly 20 years.

Cocchiara started her career as a deputy sheriff with the Greene County Sheriff’s Department and the Rensselaer County Sheriff’s Department in 1994. She joined Bethlehem’s police force four years later as a patrol officer and was later promoted to sergeant in 2008. She earned a bachelor’s degree in criminal justice administration and is a member of the New York Women in Law Enforcement Association, New York State Association of Chiefs of Police, and the International Association of Chiefs of Police.

Rexford earned an associate’s degree from Hudson Valley Community College, a bachelor’s degree from the University at Albany and a master’s degree in public administration at Marist College. He had served several years as an officer in the town of Coeymans before joining the Bethlehem police department in 1998. He was promoted to patrol sergeant nine years later.

At the time, Cocchiara said she was “deeply disappointed” with the appointment because she had placed higher on the civil service exam. She later spoke in front of the town board accusing the police department of gender discrimination. She succeeded Hornick as detective sergeant a year later.

Cocchiara had long been the only female officer in the department. One retired officer who refused to go on record acknowledged she was treated differently because she is a woman. A review of the candidates’ disciplinary files may suggest that.

In June, Gov. Andrew Cuomo amended FOIL law to allow public access to the disciplinary files of law enforcement officers. Prior to June, FOIL requests of such files were denied as the release of which would be considered a violation of privacy. Spotlight News requested access to the files for all three candidates. We received more than 90 pages of Cocchiara’s disciplinary file, but there were no pages present for Rexford or Hornick. Town Attorney James Potter, who responded to the FOIL request, said he could not comment on the disparity between the three files.

“I was not part of the disciplinary process,” he said.

Early in her 20-plus year career at Bethlehem, Cocchiara was cited a few times for possessing a casual tone with superior officers, and for her use of profane language. In 2002, former Police Chief Richard LaChappelle attempted to fire Cocchiara after she racked up 329 hours of sick leave in 2001 and nearly 250 hours the following year. She had injured her back during an on-duty accident in 2001. The injury still requires her to receive cortisone treatments. The disputed sick leave was related to that injury, she said. Instead of termination, the department required she document future sick leave requests.

On December 29, 2014, Cocchiara was on duty when her superior officer observed her patrol car parked in front of her home for three hours. According to the record, she had not called in sick. In response, she provided proof that she maintained communication with the department. She further explained the need to return home as she had fallen ill.

“My intentions were pure but in hindsight, not the best choices were made,” she later wrote to Corsi. “I realize that I push myself far too much and on this night was determined to get through the shift, not utilize any sick time and not call in someone on overtime to backfill me in the early morning hours.”

After a settlement between the town and the police supervisor’s union, she was suspended two weeks without pay. Today, she added, her attendance record is exemplary.

Town Supervisor David VanLuven said the responsibility of hiring department heads falls upon his shoulders. However, with the police department’s size and impact on the town’s budget, he said he wanted the board’s involvement earlier in the process. According to town records, 19 percent of the town’s $45 million budget goes towards maintaining the police agency, approximately as much as what goes into the highway department. Only the public works department receives more with 31 percent of the share.

“Fortunately, we have three outstanding candidates to consider and I will be working closely with the town board over the next several weeks to put together a clear list of our expectations for what we want in a chief of police in the context of a vision for our police department moving forward,” VanLuven said.

Of the five town board members, Joyce Becker, Maureen Cunningham and Dan Coffey are Democrats. VanLuven is also a Democrat. Becker was first elected to the board in 2015, followed by Cunningham in 2017 and Coffey in 2018. VanLuven first served the town after he was elected onto the town board in 2017.

Up until recently, Cocchiara served several years on the executive committee of the Bethlehem Democratic Committee as a district leader. In addition to acting as a sounding board for her neighborhood’s concerns, she was involved in selecting the party’s nominees.

Collectively, Cocchiara has donated several hundreds of dollars towards campaigns for current board members. She’s contributed $4,375 to 15 town office campaigns since 2011; including $700 to VanLuven in 2017, $300 to Cunningham that same year, $250 to Becker, and $250 to Coffey over the last two election cycles. Donations also include $1,500 to the BDC and $550 to County Legislator and BDC Chairperson Joanne Cunningham.

Conversely, Hornick donated $75 and $50 to Colin Dwyer’s run for town justice in 2017 and David Harrington’s attempt at town board in 2015, respectively. According to campaign filings, Rexford did not appear to donate towards any local candidates.

These donations were made prior to Corsi’s announcement to retire. Cocchiara said she resigned from the committee to avoid any sense of impropriety while interviewing for the chief position.

“The First Amendment is a double-edged sword,” said Coffey. “The way I look at it, [Cocchiara] has an absolute right to her political beliefs and to participate in the process. I don’t think that should give her any advantage over the other candidates. On the other hand, I don’t think it should be a disadvantage that she had been politically active.” Coffey added that “it’s a small town” and that he often faced cases from people he knew while previously serving on the town’s zoning board. With Cocchiara among the candidates, he said he doesn’t feel uncomfortable with making a decision.

“Our process is going to be based solely on merit,” he said.

The board will start interviewing candidates within the next few weeks. The new police chief is expected to appoint a deputy chief, or a similar role, to oversee the police headquarters, detectives, school resource officers and police dispatchers.

Police stationed at Colonie Center out of “an abundance of caution”