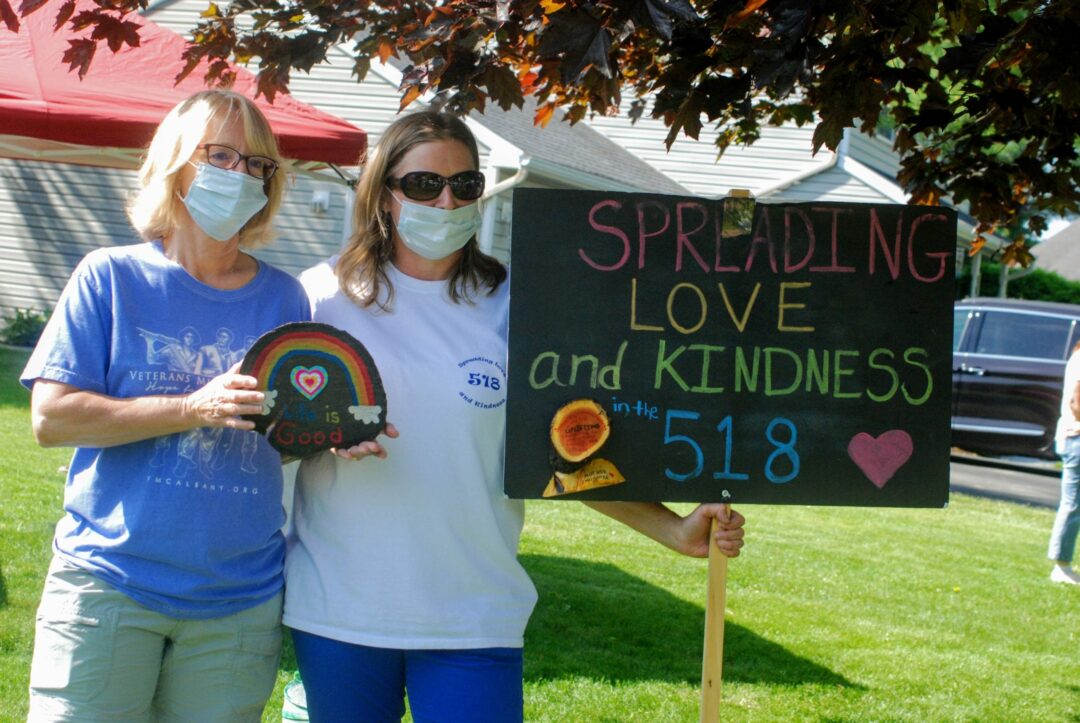 GLENMONT — “Spreading Love and Kindness in the 518,” a Capital District community volunteer group, teamed up with local businesses, families and neighbors to donate goods to the Veterans Miracle Center (VMC) on Tuesday, May 26.

A VMC van arrived at Stace Craft’s, the group’s founder, driveway in Glenmont at 9 a.m. that morning to pick up boxes of wood and rock paintings, disposable masks, non-perishable food, cleaning supplies and toiletries. They will be distributed to local veterans across the Capital District.

“I think [the VMC] hasn’t received many donations recently and I reached out to them to ask what we can donate to them and they told me they’d like non-perishable food and toiletries,” Craft said. “Members of our group have been very generous and we want to spread love and kindness, going back to how we named the group.”

Craft’s community group is made up of around 230 volunteers, including neighbors and family friends, who worked on the wood and rock paintings, and pooled goods to donate. They included patriotic and positive messages on the paintings to further honor veterans and observe Memorial Day this week.

Emily, Craft’s seven-year-old daughter who is part of the “Spreading Love and Kindness in the 518” group said, “When I paint, it calms my body down and it makes me feel happier knowing that every day, a new person will get a new piece of painted wood from us.”

Melody Burns, the VMC’s director, watched as the volunteers loaded the VMC van with numerous boxes of donations and noted that a number of them were children.

“Things like this are so important to us and it exceeded our expectations,” she said. “It’s great to see the young kids having a great time too. Even when they’re young, they understand the value of giving back, and know what veterans are and what they do. It’s like a teaching tool to them.”

The volunteers spread the mission of donating to the VMC by word of mouth.

Local businesses and establishments that joined in to donate to the VMC too included the Menands FedEx; Bliss, O’Slattery’s and I Love NY Pizza from Delmar; R Pizza House from Selkirk; and Feliciano Body Works, Inc. from Ravena.

“I’m sure the businesses are all stressed out enough already and the fact they were all willing to take on this extra thing and give back was great,” Craft said.

Burns, expressing gratitude to Craft’s group and the donations, said that due to COVID-19, the VMC had to cancel its fundraising events since spring and it has received far less donations than usual.

“We had to figure out how to serve our veterans’ needs which is our primary mission and instead of veterans coming to us, we started delivering to them if they don’t have transportation,” she added. “We have a van to help deliver food and some hygiene and cleaning products to them. Since the pandemic, we saw a drastic reduction in being able to give to our veterans.”

She said Craft and a former VMC colleague reached out to her two weeks ago about whether the VMC would like to receive donations, and she accepted.

Besides Craft’s group, the VMC has also received donations of goods since spring from the Voorheesville Key Club, Delmar’s American Legion Nathaniel Adams Blanchard Post 1040 and the Good Shepherd Lutheran Church in Albany to try to keep up with demand.

Craft started the “Spreading Love and Kindness in the 518” group in late March, shortly after the COVID-19 pandemic shut the state down. At the time, it had just eight people, including a core group of her friends and her daughter.

“My daughter is an only child and when COVID-19 hit and I had to work from home, I was going to the store and buying crafts and materials to make gift bags and drop them off at friends’ houses who each had an only child too,” Craft said. “I had Emily do virtual art dates on Facebook Messenger with four friends and they began painting canvases.”

This art project grew to include painting on rocks and wood and the “Spreading Love and Kindness in the 518” group also grew via word of mouth throughout Craft’s neighborhood, the local community and also encouraged local businesses to donate goods. Craft said group members provide or buy their own materials, including collecting rocks, cutting wood and getting paint.

As the group continued making and pooling their artworks, they began donating them to the Albany Fire Department, the Glenmont Abbey Village, the Albany Medical Center, Albany’s Beltrone Living Center and the VMC.

“We want to let them know that people are thinking of them and it’s been a trying time,” Craft said, explaining the message behind the painted artworks. “Pieces had messages about hope, love and peace. People have been so used to being so social and this is kind of our way of giving back.”

Looking ahead, Craft said she is interested in doing something for local police and fire departments, and the Ravena-Coeymans-Selkirk school district.

“Also, if anyone is interested in joining the group, please reach out to me,” she said. For more information, visit the group’s Facebook page at www.facebook.com/groups/2299944120305712.