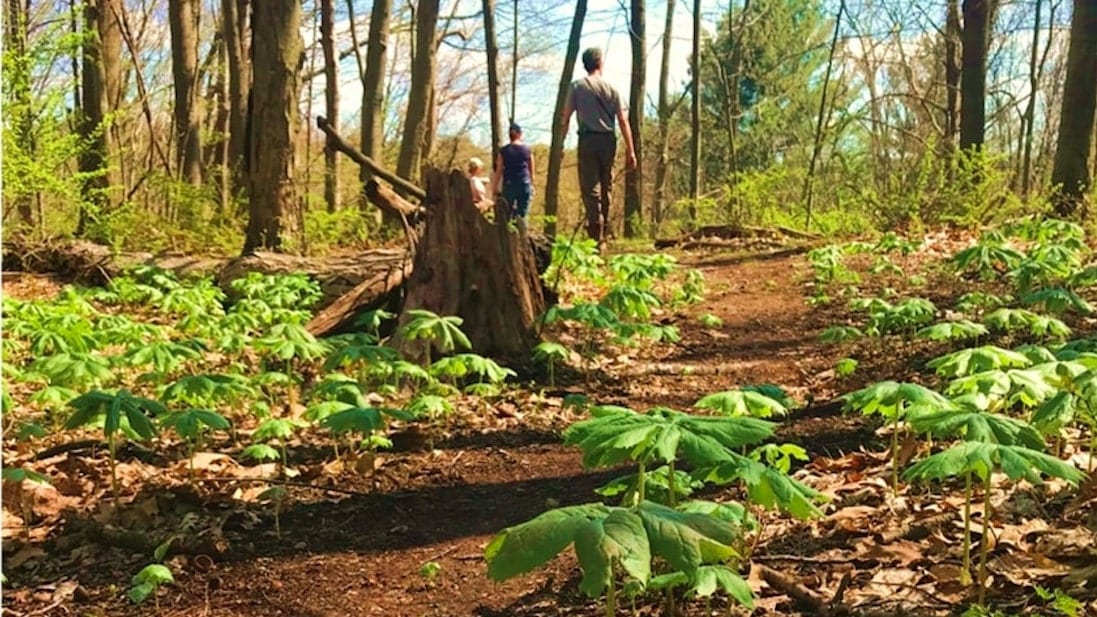 The town hopes the upcoming Normans Kill Ravines park can provide another place for residents to enjoy despite the COVID-19 pandemic. Provided photo

The park, roughly the same size as the Elm Avenue Park, is planned to have walking and mountain biking trails. It will also protect 3,000 feet of the Normans Kill shoreline as well as forests, ravines and floodplains.

“As we’ve seen throughout the region, a lot of the existing preserves in the town like parks are getting used by walkers and those who want to go outdoors during this pandemic,” said Robert Leslie, the town’s director of planning, who presented about the planned park at the virtual May 13 town board meeting. “This presents us an opportunity to expand our opportunities for outdoor walking and recreation.”

The park would consist of a 68.8-acre property in Elsmere — the town looks to purchase this property from the Normanside Country Club — and a town-owned 85.7-acre parcel in Delmar north of Wright Lane. The Wright Lane parcel, however, includes eight acres that will not be part of the park because it is reserved for the town’s Highway Department which uses it for snow stockpiling.

Leslie said the park can benefit from being located near local businesses and neighborhoods. It will be around ¾ of a mile north of the Four Corners in Delmar and within walking distance of the Albany County Rail Trail.

Town Supervisor David VanLuven said the town, its Park and Recreation Department and the Mohawk Hudson Land Conservancy began working on this project two years ago.

Mark King, executive director of the Mohawk Hudson Land Conservancy, said, “We helped the town because we’ve had experience with buying real estate and we’re really excited to be a part of this great project. We also acquired the rights to buy the [Normanside] property first and assigned our rights to the town.”

The project would cost $146,900 and use the town’s Parkland Set Aside Fund — paid by developers — to pay for it, meaning that no taxpayer dollars will be spent.

Leslie said using the Parkland Set Aside Fund will also not be affected by the COVID-19 pandemic. “In times like this where some folks may ask certainly how the town can afford to buy land in such uncertain fiscal times, the money we have here on the Parkland Set Aside Fund is only established and set up for use of parklands,” he explained. “It can’t be used for anything else, can’t be used to balance the town budget and can’t be used to help take on unexpected revenue loss. It can only be used for parkland purposes.”

Leslie noted that the Normanside property that the town seeks to purchase comes with a pre-existing 10-year bow hunting lease that was signed in July 2019 by the four-member Salisbury Road Deer Management Group with the Normanside Country Club. This lease gives the group the right to bow hunt on the Normanside property during the hunting season for deer — VanLuven said last year’s season was from October to December.

Before moving forward with the Normans Kill Ravines project, the town must amend Chapter 79 of its town code which states that hunting of any kind is prohibited on town property. Amending Chapter 79 will only apply to the Normanside property and hunting will still be prohibited in all other town parklands, including the Wright Lane property.

If the town purchases the Normanside property, amending the town code beforehand would continue to honor the pre-existing bow hunting lease, meaning that the Salisbury Road Deer Management Group can continue bow hunting even when it becomes town property until at least July 2029.

Town Attorney Jim Potter said the lease includes a provision for 12 guest licenses per year but on a single day, there can only be up to six hunters on the premises. “The [Salisbury Road Deer Management Group] is a very responsible group and they’ve been hunting on the property with permission from the Normanside Country Club for over 30 years.”

While stressing that safety in town parks is the top priority, Leslie pointed out that many state parks, nature conservancies and preserves statewide —including the John Boyd Thacher State Park near Voorheesville and the Holt Preserve in New Scotland — allow bow hunting so allowing it in the Normans Kill Ravines will not be unheard of. Hunters must have valid deer hunting licenses and follow state and federal regulations.

Sarah Walsh, the Mohawk Hudson Land Conservancy’s conservation director, said her organization has managed hunting on three of its preserves for almost three decades now. “We’ve had a good relationship with the hunters and they’ve done a great job of not only being on the land and keeping us informed of any issues but they also volunteer time to  help with trail issues,” she said. “We’ve also experienced that not only do the hunters tend to be away from the trail system but they also don’t go out at around the same time of day as hikers and walkers on the trail system. They’re usually out early in the morning or later in the afternoon. Often times, hunters and hikers never interact.”

She brought up that now hunting “is one of the least dangerous of options for deer hunting and it’s a careful shot.” VanLuven said bow hunters hunt from tree stands above, giving them a better vantage point and refuting the misconception that such hunters shoot long range at ground level which can injure passers-by. Walsh added that reducing and controlling the deer population reduces ticks which helps improve forest health.

Potter said the hunter, not the town, would be held financially responsible if they injure a person. “By the same token, we [the town] have more than adequate insurance that covers us,” he said. “I believe there will be adequate separation [between the hunters] and the trails. … The lease provides for signage too.”

The town board unanimously voted to set a public hearing on Wednesday, May 27 at 6 p.m. about the proposed amendment to Chapter 79, which Leslie said is the first essential item to address in the planned Normans Kill Ravines project.

Residents interested in participating in the virtual public hearing via Zoom — which will go on until June 10 — have three options. They can email their written comments to the town board at [email protected] before and after the May 27 meeting.

They can also register in advance on the town’s website’s meeting portal at bethlehemtownny.iqm2.com/Citizens/Default.aspx and select the May 27 town board meeting link. Residents would then see that meeting’s agenda which will include instructions on how to participate in the virtual public hearing.

After the public hearing period ends, the town board will vote in a future meeting on whether to amend Chapter to continue the process of establishing the upcoming the Normans Kill Ravines.

Dining out in business: Local eateries are adapting now to new world of social distancing

Public hearings set on May 27 on moratorium extension, licensing system on vape and tobacco retailers