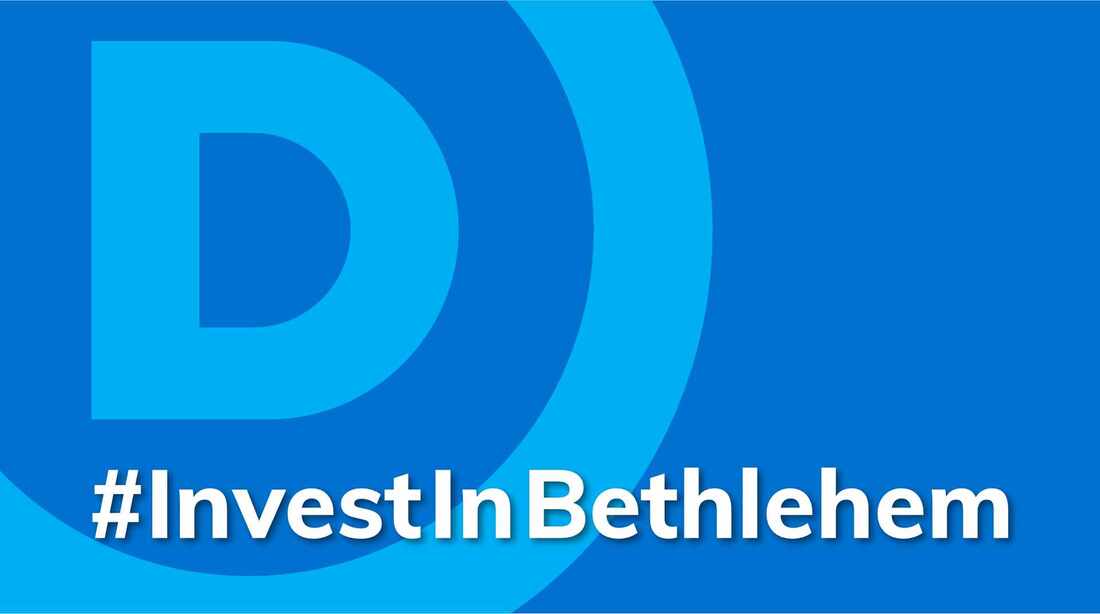 BETHLEHEM — The Bethlehem Democratic Committee (BDC) is collaborating with the Bethlehem Chamber of Commerce and Bethlehem Community Fund to launch the “Invest in Bethlehem” campaign which encourages residents to donate funds and raise awareness for local struggling businesses and the community amid COVID-19.

The campaign wants residents to share pictures and stories on social media of them supporting local businesses and spreading positivity in town, like drawing optimistic messages on sidewalks with chalk, cleaning up neighborhoods and supporting at-risk neighbors with groceries — all while using the hashtag #InvestInBethlehem.

The campaign also includes the BDC pledging to match up to $4,000 in funds when residents donate up to a cap of $2,000 each to the Bethlehem Community Fund and the Bethlehem Chamber.

“The campaign was born out of a desire back in March to use the BDC which has a big network and outreach to try and do some good during the COVID-19 crisis,” said Joanne Cunningham, the BDC Chair. “The BDC reached out to the Bethlehem Community Fund and Bethlehem Chamber to help raise funds because they are two important community organizations that aim to provide some financial resources for struggling local businesses.”

She added that the campaign is already close to raising enough money “but we’re going to keep at it until we reach it.”

Cunningham said it was important that people can have several ways to donate.

The Bethlehem Community Fund is a nonprofit organization and online donations come with a small fee. The latter also has a small processing fee and uses the ActBlue portal, which the BDC uses for online campaign contributions; Cunningham said that means online donations would show up on the BDC’s campaign finance report.

“We have to comply with all finance reporting and requirements, but that’s why we give people the option to send a check instead for the Invest In Bethlehem campaign so that it’s a different way of donating,” she said in response to concerns from some residents that their donations on the BDC’s website would come across as donating to the BDC itself. “We want to give people other ways to donate if they’re concerned.”

“Checks may be clunky to handle but they still do achieve the goal,” Cunningham said. “It appears to be working as lots of checks have been sent in already.”

Bethlehem Chamber President Maureen McGuinness expressed gratitude to the BDC for wanting to include her organization in the Invest In Bethlehem campaign.

She said the money donated to the Bethlehem Chamber as part of the Invest In Bethlehem campaign will be used for its Small Business Hardship Fund which will award grants of up to $200 each to local businesses on a first-come, first-served basis. This fund existed prior to the start of the Invest in Bethlehem campaign and McGuinness said it made sense to put funds raised into it to further help all types of local businesses.

Interested businesses can learn more about Small Business Hardship Fund’s details and access the grant application at business.bethlehemchamber.com/news/details/bethlehem-chamber-announces-small-business-hardship-fund. The grant application must be completed electronically and emailed to [email protected] to be considered by the chamber. The application also instructs a business owner to include a copy of their March or April 2020 phone or utility bill.

“They will be small grants to offset the costs of utilities,” McGuinness said. “The Small Business Hardship Fund gives us the ability to help our businesses during these challenging times. Lots of people have reached out and said they want to do something for the businesses here. The Hardship Fund is one concrete way to help.”

Paul Gutman, the Bethlehem Community Fund’s president, also appreciated that his organization is a part of the Invest in Bethlehem campaign.

“It’s community-based and you can’t always depend on the state and federal governments because what if you have an issue that needs to be resolved quickly or within a month?” he said. “That’s when we [the Bethlehem Community Fund] comes in. It’s just showing that the community cares about its neighbors.”

“I circulated the survey’s results to the BDC and it got a lot of attention because it was very startling,” Cunningham said. “It’s a haunting thought that many of our businesses could go away because of this. That survey was really a catalyst for the BDC and I to take action.”

Cunningham added that beyond the current Invest In Bethlehem campaign, there could be another future fundraising campaign.

“Not everything is about money but money does help because there’s a lot of need in our community, not just from our small businesses but folks who have their salaries furloughed or reduced,” she said. “The Invest In Bethlehem campaign has been so successful so far because people want to do some good out there and it gives a level of hope and inspiration in the community.”