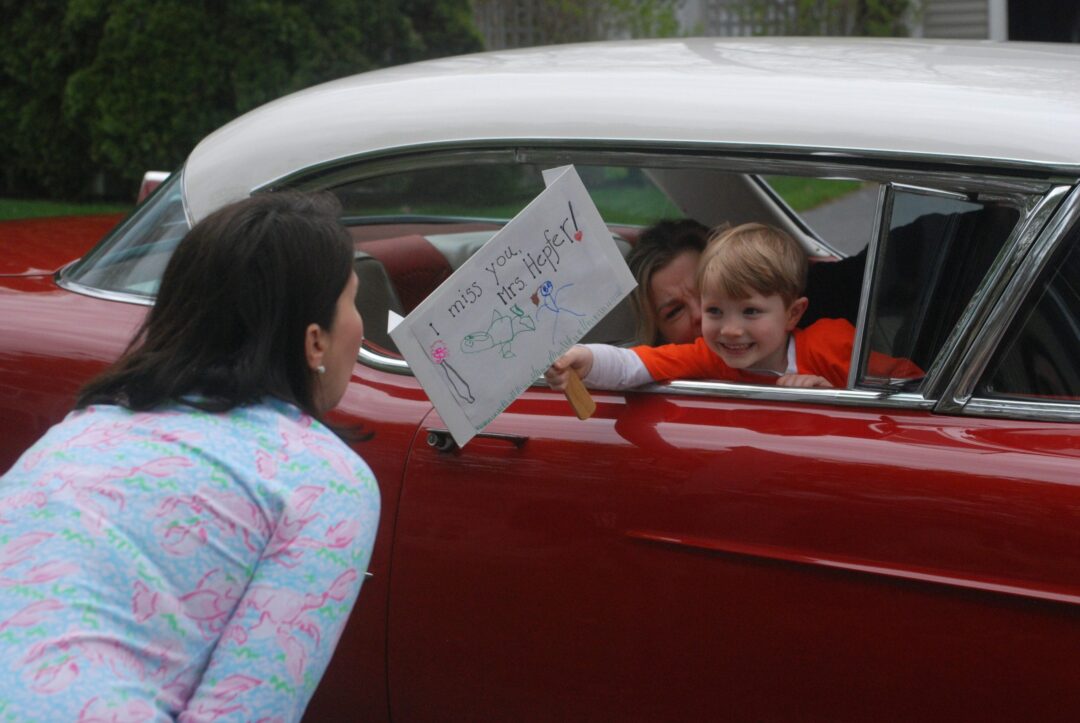 BETHLEHEM — A Hamagrael Elementary teacher was surprised with a mini-parade of around 13 cars filled with her kindergarten students and their families outside her Glenmont home on Sudbury Road on Wednesday, May 6 at 4 p.m.

The cars were decked with balloons, decorated posters and colorful drawings while the students waved and sometimes gave their teacher, Allison Hepfer, envelopes and well-wishes. The honking cars also stirred neighbors to watch the mini-parade with supportive smiles and applause.

Hepfer, who has worked at Hamagrael Elementary School for more than two decades, said, “I had no idea it was going to happen, it was such a complete surprise. It was wonderful and I had tears of happiness and a bit of sadness that I can’t see them every day in person. They’re a remarkable group.”

Quinn, one of Hepfer’s kindergarten students, said she misses seeing her teacher in the classroom and “she always makes learning so fun.” Liam, another student, said he will miss his kindergarten days with his teacher, “I’m [worried] I’m not going to see [Hepfer] again because I’ll be going onto a new grade.”

Hepfer said it was the first time seeing her students in person since the pandemic forced the Bethlehem Central School District to transition to online distance learning in March.

“Technology has been amazing so I can still stay connected with one another and hear their voices on a daily basis,” she added. “But that, in no way, replaces the community and social interaction that students get from an actual classroom. It’s tricky, especially for kindergarten students, because they need social activities as much as possible.”

The mini-parade was an idea from Hepfer’s students to observe Teachers’ Appreciation Week, according to Amy LaChapelle, Quinn’s mother who drove her during the mini-parade. “As the weeks went by and the students realized they won’t be in the classroom anymore, a lot of them said they’ll miss their teachers and friends,” she said. “So we figured it was a great way to stop by and see [Hepfer]. Everybody was unanimously so excited, onboard and very enthusiastic about doing it.”

LaChapelle also reached out to Hamagrael Elementary School Principal David Ksanznak who welcomed the idea for the mini-parade.

In an email, Ksanznak wrote, “Now more than ever, I think we are seeing the impact teachers have on the students they work with. From what I hear from parents and the children is that they miss the daily interactions with their peers and teachers. They spend a lot of time together during the course of the year and build such positive bonds. As hard as we try, it is hard to replicate this type of bond during the online instructional program.”

Ksanznak, who also led the mini-parade, acknowledged how hardworking teachers and administration staff have been, connecting with why Teachers’ Appreciation Week is important.

LaChapelle agreed, “I think we take [teachers] for granted and we don’t realize the patience they exhibit. It’s also important to know how incredibly tough it’s been for teachers to adapt instantly and how each student learns differently and comes from a different place, and how teachers adapt so well to meet their needs.”

Hepfer said, “I see how important it is for teachers to build trust with students and their parents and parents realize how much we adore children and how much time we invest in them. I just want to say thank you to the families that did the parade and I know how much they appreciate us.”