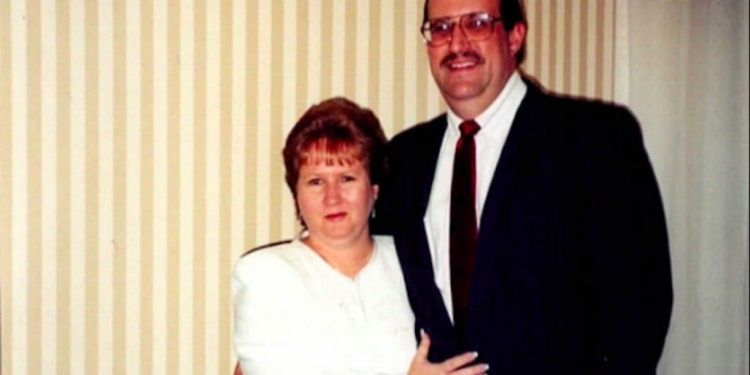 Donna Myers, left, expressed gratitude for all the donations so far to help her and her husband, Joseph, right. Provided photo

BETHLEHEM — A GoFundMe page aims to raise $20,000 for a local former longtime emergency responder who is recovering from surgery after doctors found he had a malignant brain tumor.

As of Monday, April 27, 108 people donated $6,043, meeting the original $6,000 goal amount. Delmar-Bethlehem EMS chief and executive director Steven Kroll — who launched the fundraiser with his 17-year-old daughter, Kate, on March 19 — said he raised the goal amount because he knew that Joseph Myers, 59 — the subject of the fundraiser — and his wife, Donna, 58, are going through financial hardships due to medical bills and having little income.

“We started the fundraiser with a small goal and we’re very grateful when we saw how much money has been raised so far,” Steven said. “We know many people today are going through difficult times financially so if we approach this fundraiser with some humility, we can hope people can give if they are able to give.”

Donna said doctors did not know what caused Joseph’s tumor but they removed as much of it as possible with the help of an MRI (magnetic resonance imaging). He stayed at Albany Med for four days after surgery before continuing his recovery at their Delmar home.

“Now he’s lost some of his speech, a bit of ability to write with his right hand and he’s been coughing a lot,” she said. “He can walk but uses a cane for balance.” While Joseph is now taking two oral chemotherapy pills and doing six weeks of radiation treatment before having another MRI, Donna is unsure if he will fully recover, can return to work at some capacity or can live long.

According to the National Library of Medicine, the median survival time for someone who receives surgery, chemotherapy and radiation treatment for having glioblastoma is 15 to 16 months. However, it notes that there have been rare occurrences of people surviving for at least five years or more.

Donna said she first noticed her husband falling down, feeling tired and experiencing lightheadedness in 2019. “He was always a workaholic and didn’t sleep a lot,” she said. “He always had to sit down and rest, and was out of breath and not feeling himself.” She added that he is diabetic.

Steven said his daughter knows Joseph since she was young and he was her school bus driver. “When Kate heard Joe was sick, she asked me how she could help and I asked her if she ever heard of GoFundMe and she said yes,” Steven said. “That way, people in our community could help.”

Steven said he wanted to get involved in the fundraiser as he wanted to help give back “to Joe because he’s been such a dedicated community servant for most of his life, no matter what jobs he was working. Joe is also not going to be able to work anytime soon and we just wanted to help.”

Donna expressed gratitude for the donations so far but said $6,000 is, unfortunately, not enough. “I’ve had to pay his health insurance, pay off some of [Joseph’s] painting business’ debt, his truck payment, pay for his doctor appointments’ co-pays, pay off our credit cards and to insure our vehicle,” she said. “I’ve done everything to try and lower our bills but it’s still a lot.”

Donna is a Bethlehem Central School District teacher’s aide but due to the COVID-19 pandemic, she is not being paid. She said she will return to work once schools reopen, most likely in the fall.

Due to her husband’s condition, they got approved for Social Security disability insurance but will only begin receiving a monthly $1,800 check in October. She also applied for emergency Supplemental Security Income payments but was denied because the federal Social Security Administration saw the GoFundMe fundraiser raised $6,000.

“We were shocked, it’s like holding it against you for having people donate to you,” Donna said. “How am I going to get a job with this coronavirus going around?”

However, she noted that the GoFundMe page has been helpful so far and if anyone is interested, she said people can also donate money via their PO Box at PO Box 44, Delmar NY — inside the Delmar U.S. Post Office at 357 Delaware Ave.

“We hate to be in this situation but we’re just really reaching out and hoping we can get some help that’s honestly truly needed,” Donna said. “And we couldn’t be more thankful for the donations so far. We owe so much to everyone who’s donated and if it weren’t for the GoFundMe page, I don’t know what else I could do.”

To view the GoFundMe page to donate, visit www.gofundme.com/f/long-time-emergency-responder-needs-our-help?utm_source=customer&utm_medium=copy_link-tip&utm_campaign=p_cp+share-sheet.

ON THE BOOKSHELF: May blossoms with books

Sydney Worthley more in touch with her music in upcoming EP