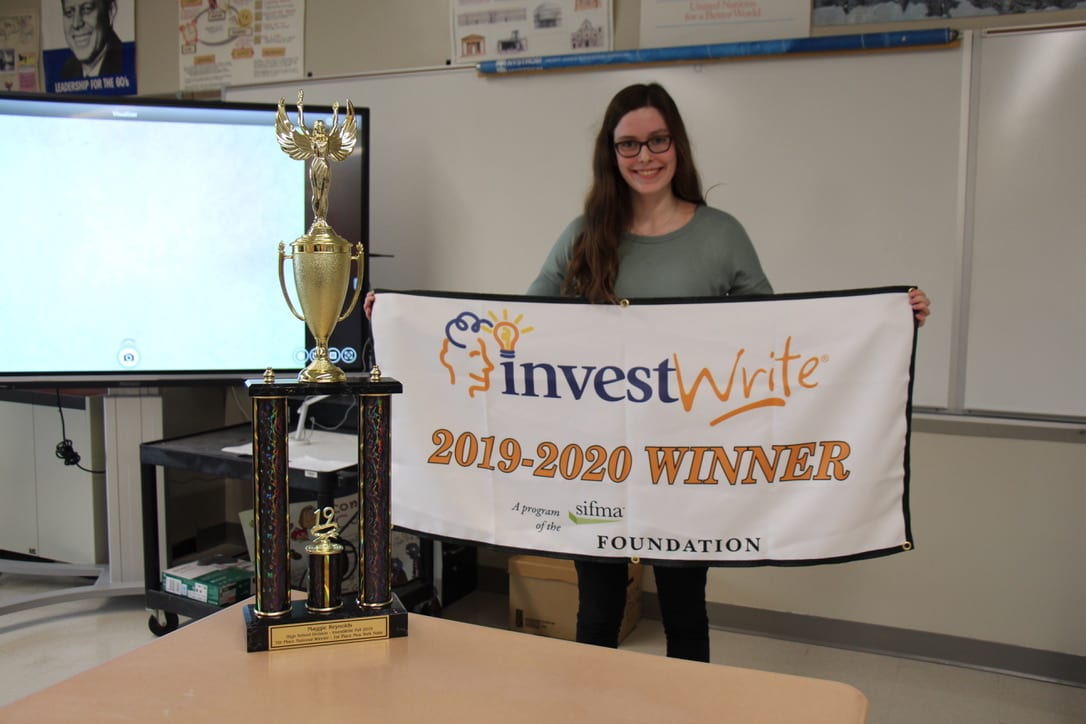 Bethlehem Central High School senior Maggie Reynolds, above, said she was surprised to find out her submitted essay made her win big in the national InvestWrite competition. Provided photo

Maggie Reynolds, 17, received the first-place trophy and $200 worth of credit gift cards on Wednesday, Feb. 26, from InvestWrite’s sponsor, the Securities Industry and Financial Markets Association (SIFMA).

“That’s really crazy, I would not have ever guessed that this would happen so I’m really surprised about it,” she said.

According to the district’s website, the InvestWrite competition took place last fall and required students to pen an essay about a dream they want to achieve; include a hypothetical financial plan to pay for that dream and pitch to virtual investors; describe stocks, bonds or mutual funds that can help the investment; and offer short- and long-term investment advice.

Reynolds chose to write about a hypothetical $750,000 investment plan for Refugee and Immigrant Support Services of Emmaus (RISSE), an Albany-based non-profit immigrant and refugee services organization, where she has been a volunteer for a year and a half.

“I thought that would be the perfect thing to write about and do more research on like what things it could invest in,” she said. “I’ve volunteered there, tutoring immigrants for the naturalization test. I’ve gotten to know a lot of people there.”

When asked why she focused on RISSE, she said she would like the organization to expand to have locations in Troy and Schenectady one day.

“I wrote about the stocks and bonds that I would invest in to have a high rate of return to be able to expand the organization successfully,” she continued.

Reynolds added her volunteerism and essay stem from her interest in social justice and political science; she also has a background in investment strategy.

“Writing the essay wasn’t super difficult, it was pretty enjoyable because it was something about what I’m interested in,” she said.

Reynolds first heard of the competition from her economics teacher, Jason Majewski, who mentioned it in class and encouraged her to do it last October.

“This year, students were asked to reflect on a famous quote by Oprah Winfrey who said, ‘Whatever our dreams, ideas, projects, we plant a seed, nurture it and then reap the fruits of our labor,’” said Majewski. “The essay prompt is exactly what I hope for all my students. Every student has a dream and the potential to make a difference. It is my job to help them along the way with opportunities to build his or her human capital.”

He continued, “Maggie Reynolds is an awesome student, who with this investment opportunity, showed what is possible with goals and hard work.” Once Reynolds drafted her essay, he looked through it and offered advice to her before she submitted it.

“I then didn’t know I won until Mr. Majewski told me to come to his room one day so I didn’t know what was happening,” Reynolds said. “I was very surprised because I submitted it a while ago and I didn’t really expect that winning or anything like that would happen.”

Reynolds continues to volunteer at RISSE, which gave her a shout-out on its Facebook page on Tuesday, March 10.

“I hope that since I did talk about RISSE in my essay and it’s published by the school, I hope that people do read it and more people start to volunteer or do things at RISSE,” she said. “I want to give credit to them. I think it’s a successful well-run organization but it’s always good to get more volunteers and people committed to it.”

Looking ahead, Reynolds wants to study political science and history at a university this fall. “I don’t know where yet because many college decisions are coming back in the next couple of weeks but I’m still really interested in social justice too so I want to keep working with immigrants and volunteering, which can involve economic classes for political science,” she concluded.

Scaled down project moves ahead in Colonie