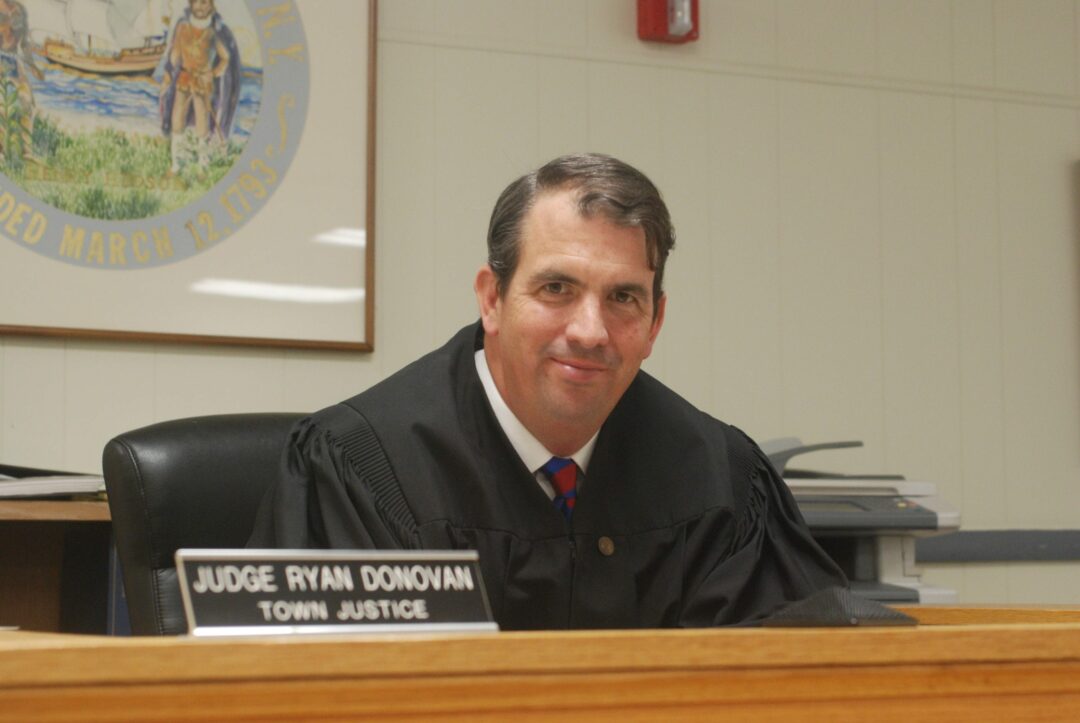 Town Justice Ryan Donovan, above, said around 10 defendants are now enrolled in the treatment court. Since its inception in 2017, 15 defendants have successfully “graduated” from the program. Diego Cagara / Spotlight News

The treatment court program, which operates in the Town of Bethlehem Court, lasts for one year for each enrolled defendant. First developed in 2017, around 10 defendants voluntarily take part in this program now.

Each meets with their attorney, an Albany County probation officer, a District Attorney’s Office representative and Donovan monthly to discuss whether they have stayed clean, what their progress and future goals are, assess whether they feel vulnerable to abuse again and keep them accountable.

“We care a lot about the people in our court and we take no pleasure in people going to jail. We want people who are sick to get help,” he said, noting that there is no silver bullet to address addiction. “The idea is that we are an instrument for positive change in people’s lives. Jail and punishment are necessary as they’re part of our criminal justice system but we want to give people suffering from addictions some assistance and make a positive change in their lives.”

If a defendant completes the year-long program, they “graduate” and can have their criminal record cleaned or have their Class A misdemeanor charges reduced.

Assistance and resources are available to defendants to try to secure housing and employment after “graduation” so as to reenter society without a high risk of reverting to addiction again.

William M. Connors, the Albany County Probation Department’s director, said it is important to recognize, assess and treat substance abuse first. “We also do everything we can to have people obtain employment and part of getting employment is remaining substance abuse-free. We’re trying to move people forward.”

However, Donovan said not all defendants feel helped by the treatment court and have the right to leave it at any time; any who fail to make progress may get kicked out too. “There’s not one way we can do this as everyone in our court requires a different level of attention and services,” he said. “I only accept people in this program that want to get better.”

“We hold them accountable and we let them know that we care, that someone’s here and that we’re listening. It’s so often that they just want someone to care,” he continued. “Giving someone structure is a way to show we care about them. Like when we meet the next month, I sometimes say that I want them to apply for five jobs in the meantime. I want to make sure they meet their treatment goals, they’re clean and what their living situations are.”

Donovan was inspired in 2017 to develop the treatment court to address the statewide opioid crisis. He also did not like how many defendants died without receiving enough assistance or resources to confront their addiction.

According to the New York State Health Foundation, almost 9 million opioid prescriptions were issued statewide in 2015, but between 2011 and 2014, about 145,000 New Yorkers abused or were addicted to opioids.

The National Institutes of Health’s Institute on Drug Abuse reported in March 2019 that the crisis had not subsided because there were 3,224 opioid-related overdose deaths in New York in 2017. This was the highest number since the institute began recording in 1999 and it was an increase from around 3,000 deaths in 2016.

“But this treatment court does not only take people in with opioid addiction, we’ll take anybody with addiction that wants help,” Donovan said. “However, the court system can be viewed negatively by people where a judge throws someone in jail and a prosecutor is insensitive. I’m here to be an example of how that’s not the way it is.”

Donovan’s mindset led him to meet with people in 2017, including representatives on behalf of the county District Attorney David Soares’ office, the county Public Defender James Milstein’s office and the county Probation Department.

“I can’t praise those three agencies enough and even our County Executive Dan McCoy was very supportive of this,” Donovan said. “We didn’t ask for money, we asked for time. Although all these groups were overloaded with their own cases, they were excited in wanting to address addiction from this different angle.”

Donovan, those agencies and the Bethlehem Police Department work together to identify possible candidates, who face certain serious charges and addiction issues, who could benefit from the treatment court.

Andrew, a 28-year-old Bethlehem resident, has been one of the treatment court’s enrolled defendants for two years and three months, longer than the program’s one-year timeframe.

“I’ve screwed up more than a few times, but they continue to support and give me the help I need,” he explained. “Seeing them continue to help is not something I was used to; most times in courts, they just send you to jail to do your time. But these guys really care.”

Once he “graduates” from this treatment court, he hopes to have his petit larceny charge — this is a misdemeanor that was previously reduced from a burglary felony — reduced to a violation. Looking ahead, he hopes to work in an Albany welding program and get an apartment.

“I have a very good start, thanks to this court. I’m just very grateful,” he added. “There’s this whole other side to Judge Donovan as I’ve gotten jail time from him before this court when I was still using. This time, he’s more treatment-oriented and wants you to get yourself together and the help you need.”

Skyler, a 25-year-old Troy-Watervliet resident who enrolled in the treatment court in October 2019, similarly offered praise. “It’s been my saving grace and it’s saved my life,” she said. “If it weren’t for Judge Donovan, I’d be dead, in jail again or a lost cause.”

Skyler faces charges including petit larceny and criminal possession of a controlled substance. Once she finishes the treatment court program, her charges can be dropped. She said her primary goal is to provide for her four children. She also wants to earn a GED, attend a nursing class and become a phlebotomist.

“I hadn’t been clean since I was 13 and I have a long line of family addicts. I’m just happy to end that vicious cycle for my kids,” Skyler said, adding she’s been clean since enrolling in the treatment court. “My mom was really good friends with my friend who just passed away recently from an overdose. So, my mom is so thankful I’m in here.”

Heading the treatment court has affected the way Donovan perceived people struggling with addiction or those who are less fortunate, he said.

“Maybe they come from a broken home or not have great parents or have education, but when you look them in the eye and you see them for who they are, I believe that everyone in their core is good,” he added. “You have to look at this through a humane eye. It’s changed me as a judge and I look at people differently now after getting to know them. I root for them but also hold them accountable.”

Donovan said there have been 15 defendants who successfully completed the program since it began in 2017. He wants to continue helping more in years to come.

“Our mission is really rehabilitation and to move people past their addiction and get them clean and sober,” Connors said. “Get them in a good way of life and off probation.”

Donovan concluded, “We deal with people on the edge of life and death, and this court, I would say, has saved lives. If we can save one person, it’s worth it.”