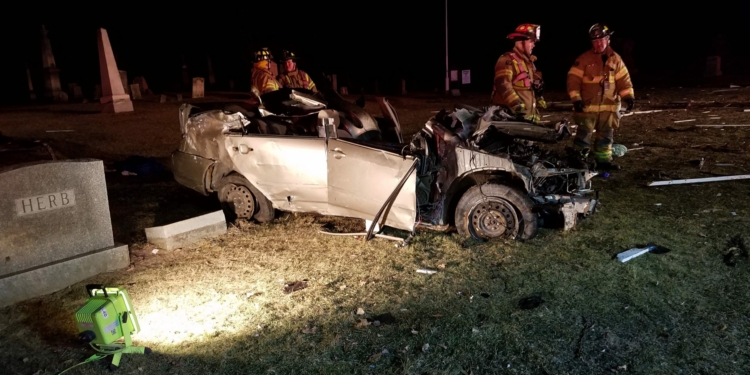 SELKIRK — A 19-year-old Selkirk driver sustained serious injuries after her vehicle allegedly rolled over and crashed into the Elmwood Cemetery on Sunday, March 1 at 2:54 a.m.

Bethlehem police discovered a large amount of debris in the roadway in front of the cemetery, located on 922 Route 9W and the driver, Janae A. Ubrich, was found trapped inside her vehicle. Police extricated her from the vehicle; she was treated at the scene by Delmar-Bethlehem EMS and Albany County Paramedics, and she was transported to Albany Medical Center.

Her injuries did not appear to be life-threatening though, police reported.

Police determined that Ubrich was intoxicated while driving, causing her vehicle to leave the roadway and strike a telephone pole, a concrete pillar at the cemetery’s entrance and several gravestones.

Route 9W was closed between Jericho Road and Creble Road for around an hour; it has since been reopened after the police investigated the scene. Ubrich was arrested and issued traffic citations for driving while intoxicated and failing to use the designated lane. She will appear at the Bethlehem Town Court on Tuesday, March 17 at 5:30 p.m.

Additional charges related to the cemetery and several gravestones’ damage are pending, and are still being investigated.

LEARNING CORNER: Taking the SAT and ACT in a student’s junior year offers the most flexibility