Bethlehem Town Board to vote on pool option at its Feb. 26 meeting 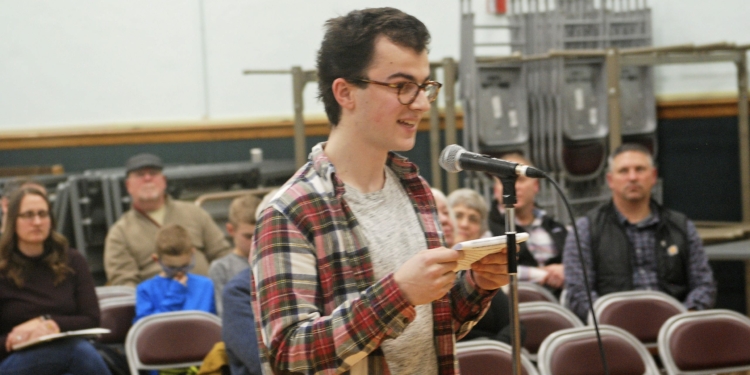 Bethlehem Central High School senior Luke Johnson, above, was among the numerous speakers at the Feb. 12 Town Board meeting who supported rebuilding the dive pool, saying it represents many people’s childhoods. Diego Cagara / Spotlight News

BETHLEHEM — Jason Gallo, the town’s Parks and Recreation administrator, recommends the Town Board should vote at its Feb. 26 meeting to rebuild the dive pool after the bids came in last week.

Two contractors submitted bids, which were presented at the Wednesday, Feb. 12 meeting. The dive pool’s construction would cost $822,000 if the town moves forward with the Buffalo-based P&S or $719,000 with the New Jersey-based Mid Atlantic. Also, the slide pool would cost $1.1 million with the former or $757,000 with the latter. Gallo said these numbers should not be subject to change as they were included in the official bid packages.

When asked why he recommends the dive pool option, Gallo said that besides the lower projected costs, “The dive pool has been an instrumental part of the town’s pool complex for more than four decades. There’s a clear affinity among the community for it.”

However, he said that regardless of which pool type the Town Board will choose, summer construction does not seem likely; instead, it would ideally start this fall and be finished by spring 2021.

The original dive pool was erected in 1973 but was closed in summer 2019 after its deteriorated structural integrity was discovered to be beyond repair. This launched a townwide discussion on whether to replace it with another dive pool or a new two-slide pool. Also last year, many residents expressed they wanted the original dive pool repaired or replaced when they spoke to the Town Board and took part in two public online surveys.

A special interactive public forum happened on Feb. 12 where Town Supervisor David VanLuven said, “I want this forum to be an environment where everyone is not only welcomed to speak but feels safe speaking.”

The resident speakers were mostly middle and high students and some parents, who generally supported the dive pool option.

Luke Johnson, a Bethlehem Central High School senior, said the town should continue looking out for its youth and the town pool complex represents one example of that. He recalled growing up with the dive pool and said, “I was not just plunging into a pool of some 10 or 13 feet of water, I was going from boyhood to manhood in one single motion — a jump. Our children need to experience what I did. … They need to face their fears and understand what the world has coming for them. The diving pool is the most important symbol of my childhood and should be preserved at all costs.”

John Reagan, a Slingerlands resident, said he made memories at the dive pool growing up and wants to continue making more with his children ahead. He said his family originally moved to Delmar when he was in third grade and often spent time with family and friends at the dive pool. He said he and his sister took diving lessons there too and were on the Bethlehem Swimming and Diving Team. Since becoming a father, he said he has enjoyed watching his son grow up with the dive pool and join the school’s swimming and diving team.

“So, my third life at the diving pool hasn’t come yet because now my kids are too cool to go diving with me,” Reagan said. “So, I hope for the next generation, I’ll be there with my grandchildren so please, I urge you to restore the diving pool.”

When asked how he felt about the speakers, Gallo said, “I think it’s tremendous. It’s the best part of local government and being able to see all those people come up and speak, especially the young advocates. It’s not easy to do public speaking. … I’m happy that we’re not choosing something versus nothing; instead, we are choosing between two pool options. There’s really nothing for us to be upset about.”