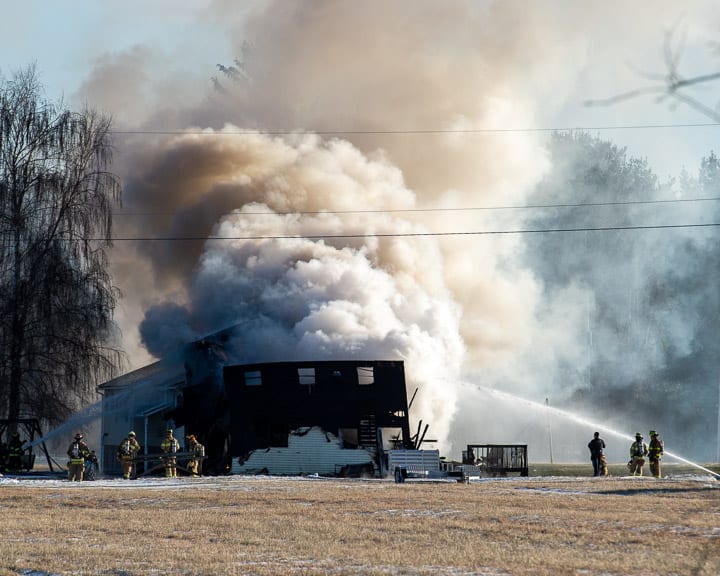 This story was first published on Tuesday, Jan. 21 at 5:50 p.m. and was updated on Wednesday, Jan. 22 at 10:44 a.m. to include how no one was at home when the fire started and how no serious injuries have been reported.

According to Bethlehem Police Cmdr. Adam Hornick, the Delmar, Elsmere, Selkirk, Slingerlands and North Bethlehem fire departments, as well as the Onesquethaw Fire Company, Bethlehem Highway Department, Delmar-Bethlehem-EMS and Albany County Paramedics, responded to the scene and noted how the house was already engulfed in flames. The residents were not home at the time of the fire and no one sustained serious injuries, Hornick wrote.

The Bethlehem Police Department Fire Investigation Cause and Origin Team was still investigating the scene as of Tuesday night. But for now, “the fire does not appear to be suspicious,” Hornick wrote.

Getting water on the blaze had been an issue. The nearest hydrant was at the intersection of Van Dyke Road and hoses were run hundreds of feet down Vadney Road to the apparatus set up nearest to the home. Firefighters were also filling tanker trucks at the hydrant at the Line Drive ball fields and driving them to the scene.

At around 4:15 p.m., a bucket loader was used to knock down charred walls so firefighters could get water on the smoldering pieces of the home, located near the Double V Stables, which offers horseback riding lessons, boarding and a 4-H Club.

Van Dyke Road was closed at the Delmar bypass until at least 5 p.m.

Preparing for the Bethlehem State of the Town Address