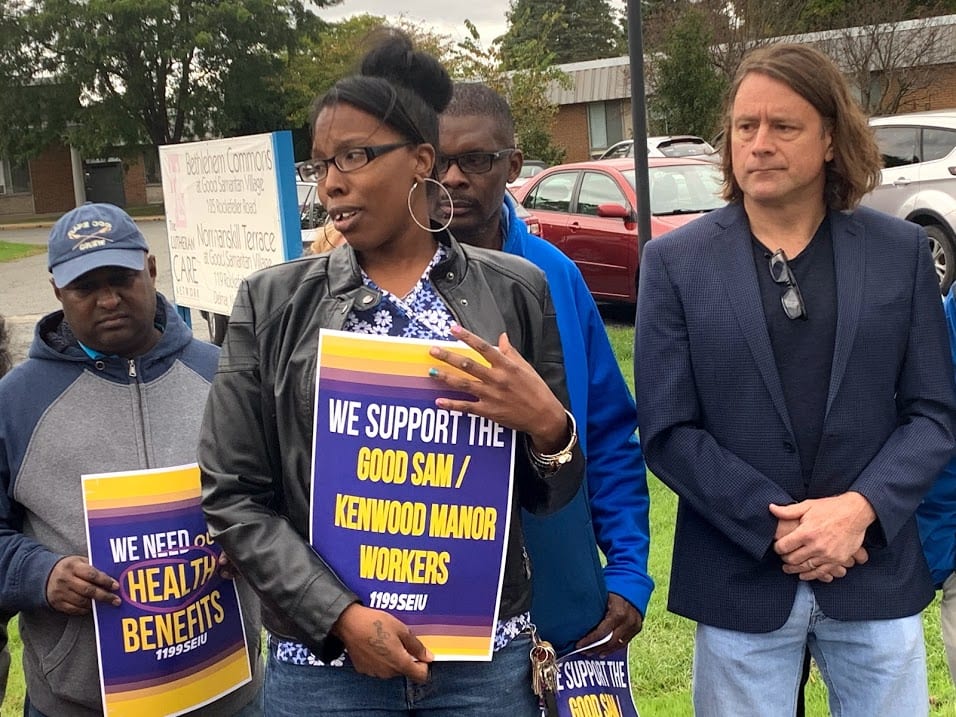 Good Samaritan employees — like Teneisha Addison at center, photographed in October 2019 — and union workers have been concerned about possibly losing their health benefits and maybe their jobs for months now. This has pushed them to consider going on strike as a last resort. Diego Cagara / Spotlight News

This story is a follow-up of the article that was published on Wednesday, Jan. 15 which, in turn, was preceded by an article published in October 2019.

BETHLEHEM — Employees at a Delmar nursing home have postponed their three-day strike for now which had been planned to begin on Friday, Jan. 24 due to fears of losing their health benefits and perhaps their jobs soon.

According to 1199SEIU United Healthcare Workers East — the Good Samaritan Village employees’ union — the Lutheran Care Network, which operates the facilities, have not been paying into the employees’ Health Benefit Fund since October 2019. The union also said the facilities lack enough staff and supplies to serve the residents; that LCN filed for Chapter 11 bankruptcy in December and it continues to be undergoing bankruptcy proceedings. The Bronx-based Centers Health Care has expressed interest in purchasing and managing the facilities but initially did not want to maintain the employees’ health benefits.

Due to these developments, the employees first announced their intentions on Monday, Jan. 13 to strike in order to give management at the Good Samaritan Nursing Home and Kenwood Manor ample notice time to figure out how to prepare for it as well as care for the residents inside.

But on Friday, Jan. 17, Centers Health Care reached out to the union about how the bankruptcy hearing date has been moved from Thursday, Jan. 23 to Wednesday, Feb. 12, as well as how they would bargain with the union. This news caused the union and employees to postpone their planned three-day strike for now.

The strike could happen on the week of Feb. 12 if bargaining goes south, according to a press release from the union.

John Makoyi, who has been a Good Samaritan employee and caregiver for more than 18 years, said, “Our ultimate goal is to be able to care for our residents and our own families at the same time. We recognize the willingness of the prospective buyers, Centers Health Care, to negotiate a contract with affordable health benefits and want to take that opportunity.  For the time being, we are all grateful not to have to leave our residents. However, we still will call for a strike in a few weeks, if we are forced to.”

Spotlight News has reached out to LCN but did not receive any comment yet at the time of this publication.

A Centers Health Care spokesperson wrote in an email to Spotlight News that it could not comment on the story while in negotiation.

Nevertheless, the issues regarding the facilities’ potential transfer of ownership, what will happen after that and whether current Good Samaritan employees’ health benefits will be cut have spurred the employees to worry about not only their futures and the residents’, but also their own families and well-being.

Makoyi said he has continued working there for almost two decades due to having health benefits which gave him a peace of mind. “Now I’m very worried about our benefits and they want to take them away,” he said. “This has pushed all of us to strike. We don’t want to strike but it may be our last option.”

Maureen Tomlinson, the union’s Capital Region vice president, said that when union workers originally voted on Saturday, Jan. 11 in a meeting room inside the nursing home to have a potential three-day strike, LCN management called the police on them, alleging they were disturbing the facilities operations and they must leave the premises.

Tomlinson added that as union workers and employees entered the meeting room, LCN management were taking photos of them and she perceived this as intimidation. As a result, she said, “We then chose to file an unfair labor practice charge [with the National Labor Relations Board] because it’s a violation of labor rights.”

Bethlehem Police Commander Adam Hornick confirmed that officers responded to the scene at 12:50 p.m. that day. He wrote in an email to Spotlight News that after discussing with both union workers and LCN management, “all sides agreed to work the issue out as a civil matter and through the arbitrator, and the representatives agreed to leave without issue.”

In a follow-up interview, Hornick said that Bethlehem police will only be present for the potential three-day strike “if required like if an incident escalates. It is free speech protected under the First Amendment so we don’t want to do anything to impede that.”

Makoyi also voiced frustration at how LCN management has yet to give him and his fellow employees ongoing updates.

He said, “Most of us have families to care for back home and every morning, we go to work but don’t know if something will happen or we get sick. We still also want to be there for the residents but we must care for ourselves too.”

Tomlinson concluded, “The nursing home has residents who were born, raised and have served their community here as workers. This is their home and this issue will have a huge impact on the community. It’s sad.”