DELMAR — The Bethlehem Police Officers Union amassed around $10,000 within the last two months for its first-ever holiday raffle and they gave all of it back to the local community last week.

Mike Berben, the union’s president, said, “We wanted to generate more revenue to allocate that back to the community. But it was a tall task because we had a limited amount of time to reach out to the community to do this raffle and bring in donations to raffle them off.”

He also said all of the union’s members went out to the local area to discuss with any interested businesses, organizations and the Bethlehem and Ravena-Coeymans-Selkirk school districts about what the raffle was about. 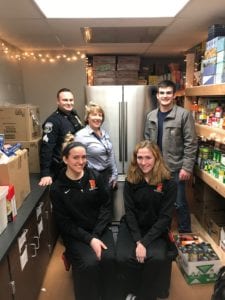 As a result, two dozen businesses as well as private donors contributed things like gift cards, a 65-inch Phillips TV, gift and apparel baskets, $1,000 worth of cash donations and more for the raffle.

Berben and Det. Chad Rice expressed surprise at how much money and items people donated to the union’s raffle, even making him wonder if it was getting too much and if there was not enough time to organize the donations and reallocate them back to the community.

“It was amazing and we basically did not expect to generate that much revenue so quickly and we were very impressed by the businesses in the community and the individual benefactors that contributed,” Berben said.

Rice said, “When we first started this raffle, we only thought we’d raise a couple thousand dollars. But within two weeks, we sold pretty much all our raffle tickets. They were gone.”

The holiday raffle was originally Rice’s idea from a union meeting where the officers brainstormed ways to continue reaching out to the local community, particularly with the youth and seniors. Regarding youth, reaching out to the Bethlehem and Ravena-Coeymans-Selkirk school districts made sense, according to Berben.

He said, “When we’re talking about how we can most be able to get money directly in line with the community’s families who are in need, we would go through the school systems because they’re with the families each day and they’ve already identified the families who would benefit the most from this raffle.”

While the union was able to donate to over 50 children at RCS, Rice said he was able to connect particularly well with the BC school district as he had served as a school resource officer at the high school for many years prior.

This resulted in the union donating a refrigerator worth almost $1,200 to the BC Backpack Program, over $1,140 to several BC families in need, almost $1,600 to help a student pay for their much-needed surgery, and more.

BCHS principal Dave Doemel Jr. said, “Some of these gifts from the [Bethlehem Police Officers Union] will help make the holidays a little brighter for families in the short term, and others will be improving lives for a lot longer than that.” He added that the donated refrigerator will help provide more fresh and healthy food options for students.

BC superintendent Jody Monroe thanked the union for their generous donations and helping families going through difficult times. “Community relationships are integral to the mission of the school district and we have always been able to count on the Bethlehem Police Department as a trusted partner in delivering on that mission. The investment they chose to make through their holiday raffle will serve students well into 2020 and beyond,” she said.

Regarding the student who needed surgery, Rice said, “It was an eight-year-old child from one of our elementary schools and the insurance company wasn’t paying the bill and therefore, it wouldn’t be performed. So, we paid for it.”

Berben chimed in, “This particular surgery is going to have a long-lasting impact on this child although we can’t get into specifics. As a result of this, this is going to be life changing for the future and development of this child.”

Looking ahead, Rice and Berben said they hope to replicate the raffle’s success again.

“Because this year’s raffle was so successful and it allowed us the revenue to do so much good, this is something that we plan on doing every single year,” Berben concluded. “We’re only as good as the community allows us the resources to be able to do that and the businesses that contributed allowed us to make a difference greater than we ever had before. So, what’s really good from all this is the support we had from the community.”

Even though it may seem early, Berben added that any local business or organization that is interested in contributing to next year’s holiday raffle can contact the Bethlehem Police Department at 518-439-9973.

Man leads police on a wild, two-hour chase before arrest in Colonie