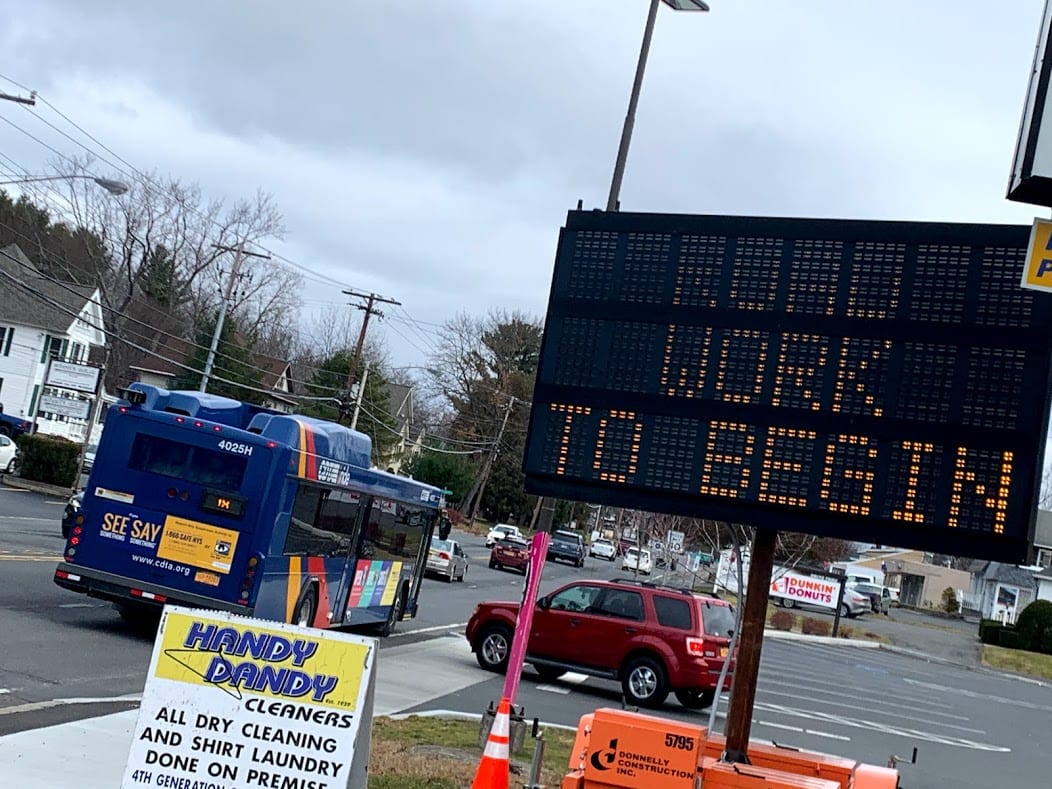 A suspected water leak will be investigated and repaired on a stretch of Delaware Avenue, starting on Wednesday, Dec. 4. Diego Cagara / Spotlight News

Editor’s note: This article was last updated on Tuesday, Dec. 3 at 1:40 p.m. to include Delaware Plaza managing director Debbie Nolan Murray’s comments. The article’s print version for the Dec. 4 issue is an earlier version of this article which does not include her as she was not available for comment at the time.

DELMAR — If you’ve recently driven through Delaware Avenue between Booth Road and the Normans Kill, you would have noticed the message boards stating “ROAD WORK TO BEGIN 12/4/19.”

The City of Albany Department of Water and Water Supply will investigate and repair a suspected leak somewhere along a near one-mile stretch of Delaware Avenue, starting on Wednesday, Dec. 4.

One of the two large, electronic traffic message boards is located near Delmar Beverage Center and the other near Old Delaware Avenue. A few construction vehicles were already parked near the Speedway gas station as of Friday, Nov. 29.

William Simcoe, the department’s deputy commissioner, said the nature and extent of that suspected leak are not confirmed, but it is not being treated as an immediate emergency.

“A couple of weeks ago, we started getting calls about a puddle there and we took some samples,” he said. “We think it’s our leak and then we put up the leak detectors to see if we can locate it. There aren’t a lot of spots to put in the leak detectors. On Monday [Dec. 2], we’ll do a test pad and try to get a better location. We’re doing some investigative work to make sure we’re digging in the right location and then we’ll dig to repair it.”

This would then lead to the official start of work on Wednesday, Dec. 4.

Simcoe said repairs to the leak could take a few days, but a pending snowstorm forecasted for Sunday and Monday could affect the project’s timeline.

On Friday, the National Weather Service reported a forecast of a snowstorm with an undisclosed amount of accumulation on Sunday and Monday, Dec. 1 and 2, which is expected to impact local travel.

When asked if there is a possibility of a water main break during the repairs, Simcoe said, “We’ll be taking this main down so we will have to shut it down and partially drain it and hopefully repair it. It is a process where we have to carefully take pressure off the main.”

The work’s impact on traffic would depend on where the exact location of the suspected leak is, which has not been confirmed yet. Simcoe said that the state Department of Transportation has created a traffic plan for this and “we’ll try to maintain two-way traffic. It depends on where we have to dig.”

Bethlehem Police Department Cmdr. Adam Hornick wrote in an email to Spotlight News that his crew and the town’s Public Works department are aware of the project.

“Our officers and Town Department of Public Works officials saw water in the road there for the last few weeks and alerted Albany officials,” he stated. “They have told us that there will be one-lane traffic in each direction during the work.”

George Kansas, the commissioner of Public Works, has been the town’s main contact person for the state Department of Transportation and City of Albany for this project, according to Simcoe, but Kansas was not available for comment on Friday.

Town Supervisor David VanLuven said he has been in contact with Simcoe about the project and its purpose too.

Delaware Avenue is home to several retail businesses, including Delaware Plaza. While it is the holiday season now, Simcoe said local retailers have been notified, and that they will continue to be notified with information.

Delaware Plaza managing director Debbie Nolan Murray said Elizabeth Staubach, the town’s economic development coordinator, told her last week about the upcoming repair works. “I appreciated that correspondence and the city of Albany reached out to me after the town did,” she said. “They sent us their proposal and plans to keep us in the loop and it was also nice to have that rapport. The city reached out last week too.”

Murray added that she has since sent out a memo to all of her plaza’s tenants. She said some business owners along Delaware Avenue are concerned about the works’ impact on vehicular and customer traffic.

“The works could take three days to a week and it depends on how quickly where they can find the leak,” she said. “The best scenario is that the leak is behind the Hannaford property so that they won’t have to be on Delaware Avenue. But they won’t know until they dig.”

Spotlight News reached out to the DOT and a DOT spokesperson referred to Simcoe’s department for comment.

PARENT PAGES: Get ready for Santa!