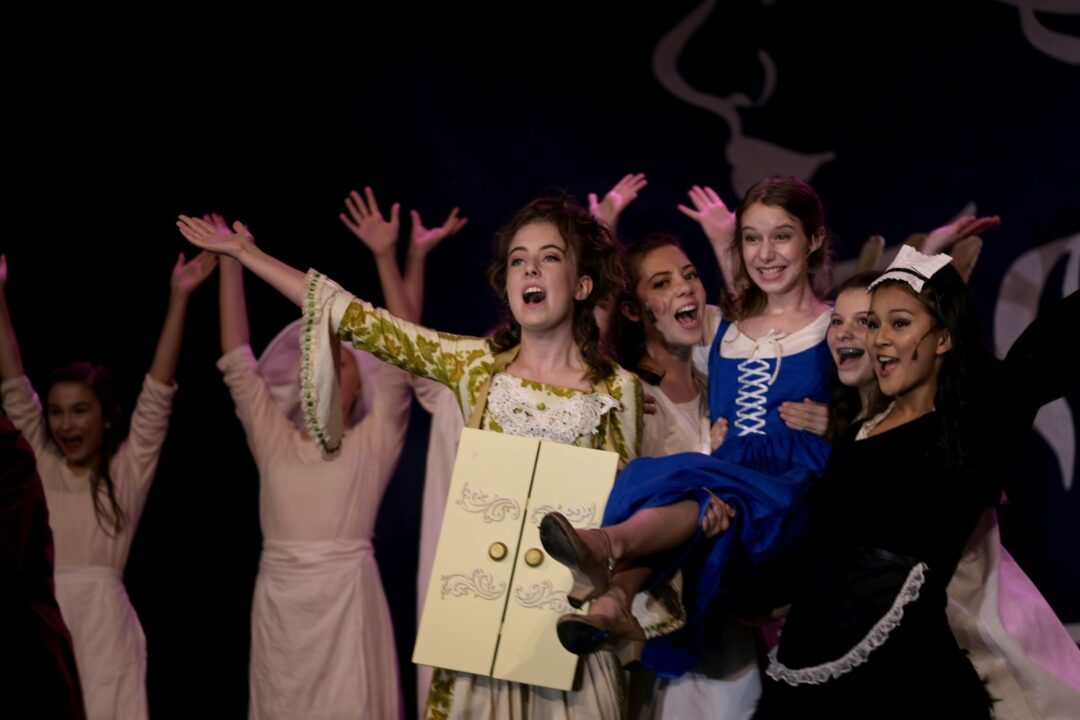 COHOES — Tale as old as time, song as old as rhyme. While that lyric is famous from Disney’s 1991 animated and 2017 live-action “Beauty and the Beast” films, Capital District residents can hear it live at the Cohoes Music Hall now through Saturday, August 3.

Park Playhouse is presenting “Beauty and the Beast Jr.” which is a mostly adolescent-oriented production comprising a mix of 33 local elementary and middle school students, around 10 of whom are from the Bethlehem area. The musical follows the original 1991 film closely and retains many of the classic numbers, offering a euphoric mix of hopeless romance and nostalgic tunes.

While the production had first opened on Tuesday, July 30, performances are still happening on Friday, August 2 and Saturday, August 3 at 2 and 7 p.m. Tickets range from $12 to $25; they can be bought online through Ticketfly or calling the Playhouse box office at 517-434-0776. For more information, visit www.parkplayhouse.com/beauty-and-the-beast.

Director Rich Johnson, who lives in Bethlehem, wrote in an email that auditions and casting were held in February, and he gave a special shout-out to his colleagues — choreographer Kellie Schweon, music director Brandon Jones and stage manager Nora Collins. Being his third time directing a production with Park Playhouse, he explained his return as stemming from Park Playhouse’s “focus on making the experience for the students a priority. When they have a great and educational experience, it always carries over into the show. I am proud of the work the team I get to be a part of does, it is a true collaboration of passion and talent.”

Attending the matinee performance on Wednesday, July 31, the production looked impressive with its large costume-adorned cast on a seemingly small historical stage. This was emphasized during grand numbers like “Belle” and “Be Our Guest” where despite occasional audio issues, the cast was able to recapture the original film’s animated extravagance with witty dialogue and revolving set pieces. Background cast members proved essential too as they operated like a Greek chorus to help move the storylines along.

The two leads, Belle and the Beast, were portrayed by Bethlehem Middle School students Catherine Fitzgerald and Gabe Martin respectively. The couple shined with their initially-innocent dispositions and their shift from a captor-captive dynamic to a romantic couple felt natural.

Another highlight was Kevin Begley as the resilient Gaston whose strong vocals and raw physicality helped bring his character to life on stage. It almost felt sad to watch Gaston be defeated in the end as Begley’s talents deserved more attention, which the character of Gaston probably would have reveled in.

Fitzgerald, 13, who will start eighth grade at Bethlehem Central Middle School this fall, said she was “really surprised and happy” when she found out she landed the female lead, a part she had wanted but did not know if she would actually get.

Saying that “Beauty and the Beast” is among her favorite Disney films, Fitzgerald said since her casting, she has made many new friends among her castmates and enjoyed Johnson’s direction. She added, “Well at first, I was really nervous about singing in front of everyone but everyone has been so kind and talented, and that helped so much. I also know the directors and they also have put on great shows.”

Fellow 12-year-old castmate Yuna Chung, entering eight grade at BCMS this fall too, portrayed Babette who is a maid and Lumiere’s love interest who was turned into a feather duster. She similarly said she joined the production due to her personal love for theater, and Park Playhouse and the musical’s company offering a welcoming environment to her.

She believed that the Park Playhouse program “is really good at teaching you how to become actors, singers and dancers, and they make it really fun to help you improve.” She explained that while rehearsals were fun, they had meditations, theater-oriented games and time to dance to music too.

This connected to how Johnson said the students learned about production work, and theater concepts and ideas via games, improvisation and workshops. “They are kids first and foremost and keeping things like ‘recess’ as a part of the day is integral to the program because it helps keep them focused and it’s summer and they are kids,” he added.

Yuna’s younger sister, Emma Chung, 10, is a Hamagrael Elementary student who portrayed one of the eight Silly Girls in the musical, who comically seek Gaston’s affections. Having previously worked in two productions with Park Playhouse already, she said her experiences then were fun and she wanted to return again, this time for “Beauty and the Beast.”

While saying that she enjoys learning choreography, Emma expressed interest in joining more theater productions as she eventually goes into middle school soon. Fitzgerald and Yuna also indicated a possible interest in doing more theater in the future.

When asked how he felt that some of his young students may want to pursue theater seriously, Johnson wrote, “We let them know there is never one path, there is their plan. Do many different things, be kind, say please and thank you. When you audition, you never have control over who does and doesn’t get cast. So focus on showing what you can do and do your best. You will get many no’s and the more you audition, the more yes’s you will get. It has nothing to do with you as a person, so make sure to keep at it.”

In the meantime, the three students are still performing “Beauty and the Beast Jr.” through Saturday, August 3. For more information, visit www.parkplayhouse.com/beauty-and-the-beast.

SPOTTED: Dutchmen win round one; will play Mohawks in East finals