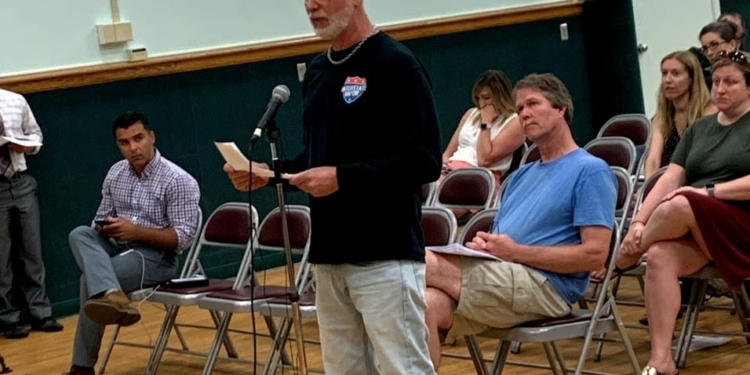 Interstate Vapor owner Leo Carusone, above, speaks against the proposed moratorium prior to the Town Board's vote. He opened his business in 2015 and said he always ran it responsibly. Diego Cagara / Spotlight News

BETHLEHEM — The Town Board approved 4-1 to have a six-month moratorium on vape and medical marijuana stores after deliberation and having a public hearing in its June 26 meeting.

VanLuven said that the moratorium would go into effect immediately, citing it as an important issue due to the realization that the town’s zoning regulations do not address anything related to vape or medical marijauna stores. He said it is also a timely issue as the town has received two applications for such stores recently, one on 243 Delaware Ave. in Elsmere and the other on 365 Feura Bush Road in Glenmont. The Town Board noted that the former would be located in front of Elsmere Elementary School and the latter would be 1,800 feet from Glenmont Elementary School.

Robert Leslie, the town’s Planning Division director, confirmed that the moratorium would not affect Interstate Vapor — the only existing vape shop on 340 Delaware Ave. in Delmar which opened in 2015 — and also the proposed Glenmont business as it already received its own certificate of occupancy from the Building Department on the week of June 16. He said that the moratorium would affect the proposed Elsmere business as it has not received its own certificate of occupancy and also impact any other applications for in-town vape or medical marijuana stores for now.

Foster said that he did not like that the moratorium could be used as part of a political agenda and spread hysteria throughout the community about the dangers of vaping. Prior to the board’s vote, he said that if the moratorium would be approved, it indicated that the other board members do not have much faith in the town’s police department — in protecting residents, including youth, from illegally buying or abusing vape devices or medical marijuana — as well as not respect honest businesspeople who either have already opened such a store or are proposing to open one in town.

Foster found it was “arbitrary” that the other board members defended the necessity of a moratorium due to their belief that public, especially youth, exposure to vaping and marijuana would have direct adverse health impacts. “It has been established that fast food has really serious adverse health impacts on all ages, especially children, with epidemic levels of childhood obesity and diabetes. Yet there’s no proposal by this board that I’m aware of that there would be a moratorium on the location of fast-food restaurants in proximity to elementary schools, recreation spaces or elsewhere,” he said.

VanLuven said that vaping and medical marijuana are new challenges that the town needs time to look into, unlike fast food which he said had been an issue for decades now. He also brought up that the potential legalization of marijuana in New York state is another new issue to address too. Taking the time to address zoning codes has helped the town prevent a hazardous waste facility from being placed near a school, for example, he said.

“I think that passing this moratorium will give us a chance to have the thoughtful, productive conversation that we need rather than rushing into decisions and cloaking them in the guise of politics when actually it’s good governance,” he said.

Coffey said that the moratorium is not about debating the legality of vaping overall, but rather using it as a six-month pause button to look into and update the town’s zoning regulations, determine if there should be a required distance of vape and medical marijuana shops from schools, and where such shops should be located in town.

Cunningham said the board had received over a dozen emails from residents who supported the moratorium but were unable to make the public hearing. As a member of the Bethlehem Youth Court, Cunningham brought up that in a recent meeting, a middle school principal presented all the confiscated vape products found in the middle and high school; she connected this with how the local youth have been exposed to and tried out such products, which she found concerning.

She said the moratorium helps the town to look forward and take the time needed to address zoning regulations and “think about the kind of community we want to be.”

Prior to the Town Board deliberation, around a dozen residents voiced their perspectives on the moratorium proposal. Most agreed that having a vape store near a school could interest youth to try vaping which can lead to health issues, that vaping products come in flavors and different colors to attract youth, that young people’s minds can be easily molded to continue vaping through adulthood, and vape shops may deter potential families to want to move into Bethlehem.

“It terrifies me that my school where I have so many amazing memories could have a vape shop right next door … and that could confuse me,” said Lyla Stebbins, a Bethlehem Central Middle School student who was notably the youngest person to speak that night; her comments induced applause from the audience. “Being a child is already confusing enough and … it could be confusing to a child to be hearing from an adult that we should not vape and don’t smoke. And then, right across the street is a vape shop offering it.”

In contrast, Leo Carusone, the owner of Interstate Vapor, said he used to smoke and switched to vaping in 2011, and “my life has changed for the better.” He said that he wants to help other adults kick their smoking habits too, which explained why he opened his business in 2015.

“In those four and a half years [so far], there have been zero instances of underage sales at our shop,” he said, adding that he always remained firm and responsible with his store like not allowing to sell even a soft drink to anyone below 21 who comes to the store. He also is aware of how easy forged out-of-state IDs are made.

He also brought up Cunningham’s comments from the June 12 Town Board meeting where she had said she does not “think it’s a coincidence these shops are going in near schools. They know who their customers are.” He said that he found those comments “offensive and hurtful” as his business is responsibly run, many of his adult-only customers enjoy the fruit-flavored vape products, and it serves the community.

Cunningham later said in the June 26 meeting that she still stood by what she said on June 12, adding that while she believes Interstate Vapor is a responsible business, not all businesspeople may be as honest and forthcoming like Carusone. “Prove me wrong. But I think the last 50 years of the tobacco industry have proven it’s a very predatory industry.”