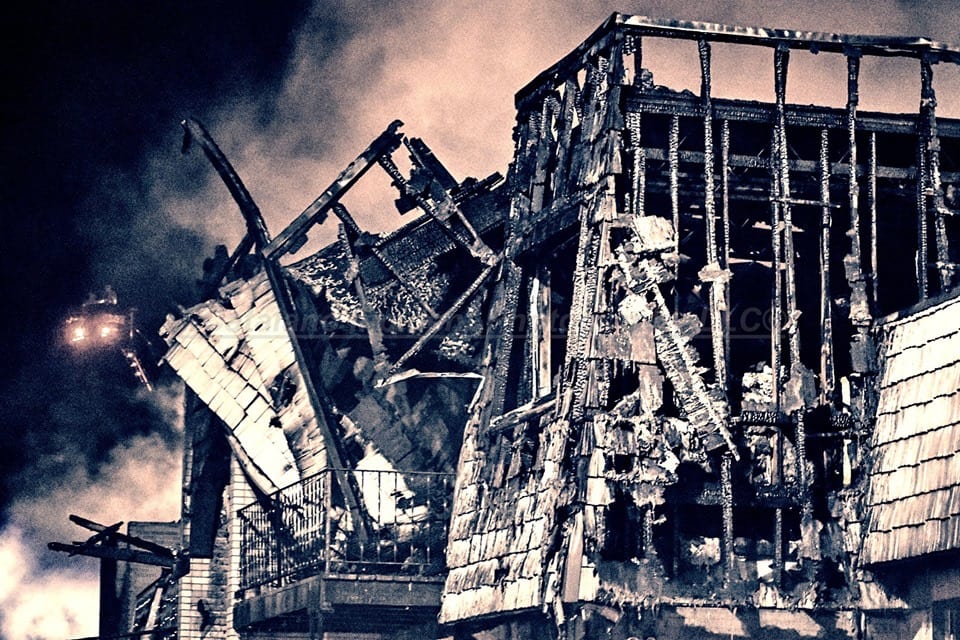 The immediate aftermath of the fire that affected a Slingerlands apartment building. Tom Heffernan Sr. / Special to Spotlight News

SLINGERLANDS — One person has died from a structure fire at 26 Meadowbrook Dr. in Slingerlands that began around 2 a.m. on Thursday, June 13, according to Bethlehem police.

The fire occurred at an eight-unit apartment complex that comprised of seven residential apartments and a business office; the fire was so massive that it was feared to spread to three nearby buildings too — these three suffered minor burns only. The apartment complex and adjacent buildings were evacuated, although police acknowledged that certain residents who were seniors or had disabilities had a more difficult time leaving safely.

Police have confirmed on Monday, June 17 that the deceased individual was a 64-year-old resident named David M. Boggs who had lived on the second floor. His body had been transported to Ellis Hospital by the Albany County Coroner’s Office for an autopsy on Friday, June 14 at noon. It determined that he died from smoke inhalation.

Arriving on the scene were around a dozen emergency responders, fire departments and EMS agencies, including those from Bethlehem, Guilderland, Colonie and New Scotland. The Red Cross and Bethlehem Emergency Organization also came to assist residents with shelter in the meantime.

All of the affected apartment building’s units “are confirmed to be a total loss” though, according to Bethlehem police. They have also been working to locate relatives of individuals who resided at the apartment and have made contact with residents who were out of town at the time of the fire.

Bethlehem Police Cmdr. Adam Hornick said that the investigation — into what caused the fire and where it originated — has only just begun and would be “a very long process. … It’s way too early to speculate what those causes could be.” The investigation is being led by the Bethlehem police and assisted by the state Office of Fire Prevention and Control, and the Albany County District Attorney’s Office.

Hornick acknowledged that the apartment building was not equipped with sprinklers though, as it had been built “at least 50 years” ago; officials are still working to confirm exactly how old the building is. Officials are also looking through any possible cellphone footage and continuing interviews as part of their investigation.

Anyone with further information on this incident is encouraged to contact Bethlehem police at 518-439-9973.

More information on this story is expected as the investigation continues.