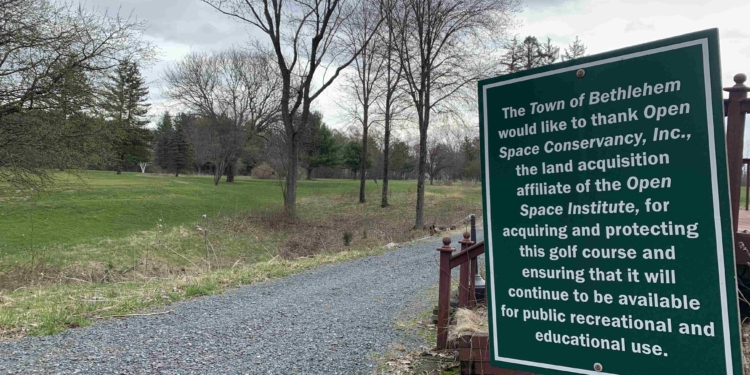 What was once a local family-oriented and environmental icon now looks empty. Diego Cagara / Spotlight News

GLENMONT — After the Town of Bethlehem announced the Colonial Acres Golf Course had ceased operations late last month and that it would keep it as a park, a few former employees and town figures who saw its decline have come out to speak on what they believe caused it to close.

Located on 15 Saybrook Dr. in Glenmont, it was in service since around 1964 and was saved from being developed in 2007 when Open Space Institute purchased it from its original private owners. According to the town’s Parks and Recreation’s current administrator Jason Gallo, the nine-hole golf course was then ran through his department until around 2012.

In 2013, the town entered into a three-year term agreement with Dale Ezyk who leased it and became its owner/operator. That agreement was renewed in 2016, also the year Open Space Institute parted ways with Colonial Acres, through December 2018. The golf course’s closure was then announced in late March 2019.

Among the reasons for its closure, said Town Supervisor David VanLuven, was that the town did not have the specialized skill set or resources to efficiently manage a golf course; that it was hurt by the 2008 global financial crisis and recent opening of the nearby 18-hole course, Hidden Meadows; and that the golf course had become too expensive to operate. According to a town memo he provided, the golf course had been seeing lower attendance rates in its final years and it needed around $100,000 annually to operate it.

Patrick Blum, the golf course’s superintendent from 1994 to April 2015, said he was disappointed that it had deteriorated in terms of maintenance and visual aesthetics in its last few years. He said that when he was still employed there, he had taken pride in maintaining the golf course with highly-environmental methods and keeping it aesthetically inviting for visitors, all while trying to keep maintenance costs down.

Examples he offered included using all-natural pesticides 90 percent of the time; having two holding ponds collect runoff and rain water; and planting shrubs and trees throughout the course to enhance its wildlife habitat.

The golf course also originally joined Audubon International — a Troy-based non-profit environmental education organization which collaborates with developments to practice sustainable and environmental management — in 1997 and was first certified in 1998 as an Audubon Cooperative Sanctuary, in recognition of its environmental practices. For his efforts, Blum and the golf course also appeared on numerous publications through the years like “Golf Course Industry,” “Club & Resort Business” and “New York Golf” as well as won dozens of awards.

But when Ezyk became Colonial Acres’ owner and leased it in around 2013, Blum said it began to decline then because of Ezyk’s alleged poor management and how he introduced two individuals to the golf course — Ron Dodson of ISC-Audubon who came in 2014 and his son, Kelly Dodson of Audubon Landscapes Services who came in 2015. Although their separate businesses share the name “Audubon,” they are different from and not related to Audubon International.

While those two businesses supposedly work with developments to be more sustainable and certify them as environmental properties, Blum said that they did not know how to manage a golf course. “By 2017, Colonial Acres lost half of its greens and in 2018, Dale lost the golf course overall,” he said. “To me, that’s the downfall. It was them not having the knowledge to maintain the golf course.”

Spotlight News reached out to Ron and Kelly Dodson for comment but did not receive any response at the time of this article’s publication.

Because of the two businesses’ introduction to Colonial Acres, the golf course stopped being part of Audubon International in 2015, the same year that Blum was let go by Ezyk. No one was hired to replace him as superintendent afterwards, according to Blum.

Blum added that when the town acknowledged Colonial Acres’ lowering attendance rates since 2008, he was asked by the town to provide some recommendations on how to possibly revive it then and in fall 2018. Suggestions he gave included having a discounted fee for town residents, lowering the fee down a bit back in 2008, and having a 25-by-25 food shack with a restroom built. Blum said, however, that the town did not listen and also ended up building a 60-by-30 maintenance building which he saw was unnecessarily big.

“This golf course should’ve never gotten to the point it is now and it was an environmental icon,” he said. “I just want people to know the truth and people have been coming up to ask me what happened to the golf course. I just shake my head and it destroys me.”

Ezyk said he had to let Blum go in 2015 because he could not afford to pay him although he recognized his environmental efforts. He also said that in the golf course’s final years, people complained about the $10 fee to play a round of golf in nine holes which partially caused lower attendance rates.

“The game of golf has been in decline for years and I think it’s finally bottomed out here. I just got to Colonial Acres at an unfortunate time and it showed in how there were fewer rounds played,” he said.

He also explained that the golf course’s budget limited him from hiring an efficient maintenance company to oversee the course. Instead, he was only able to bring in ISC-Audubon and then Audubon Landscaping Services; he paid the latter $1,000 weekly to come in three times a week to mow the grass and maintain equipment, and bring fertilizer, insecticide and fungicide. “It costs money and because of the declining rounds, I couldn’t afford to maintain it as much as I wanted,” he said.

He agreed with Blum in acknowledging that Audubon Landscaping Services did not have the best experience in caring for the course’s greens and “in all honesty, you need somebody there everyday. Greens are also very sensitive because you can over- and underwater them. But I never thought they didn’t do a good job and I thought their performance was as good as can be expected. I couldn’t afford a full-time groundskeeper too.” He added that the course lacked running water, a proper food/beverage area and public restrooms — people had to use portable toilets — which he believed added to its

Ezyk said he was sad to see the course close as “it was part of my life for those six years. I did everything I could to maintain it as much as I could afford to.”

According to Gallo, the golf course’s fall was mainly related to the declining number of golfers which, in turn, he said could explain why Ezyk could not afford to keep Blum and had to turn to a different source to try maintaining the course.

“My main priority, and the town’s, is keeping it as a beautiful open space and we want to maintain that perspective of sustainability again,” he said, saying that the town had a public meeting in February with Colonial Acres residents and there was a general consensus of keeping it as a park.

He added that the town is planning on “engaging the overall community in a bigger scale” soon to also learn what other town residents would like for the golf course’s future. “It’s never a good feeling to have a recreational venture close down but I’m looking at this as an opportunity,” Gallo concluded. “If we can connect people with the outdoors again, we can at least fill that void, perhaps in a better way.”