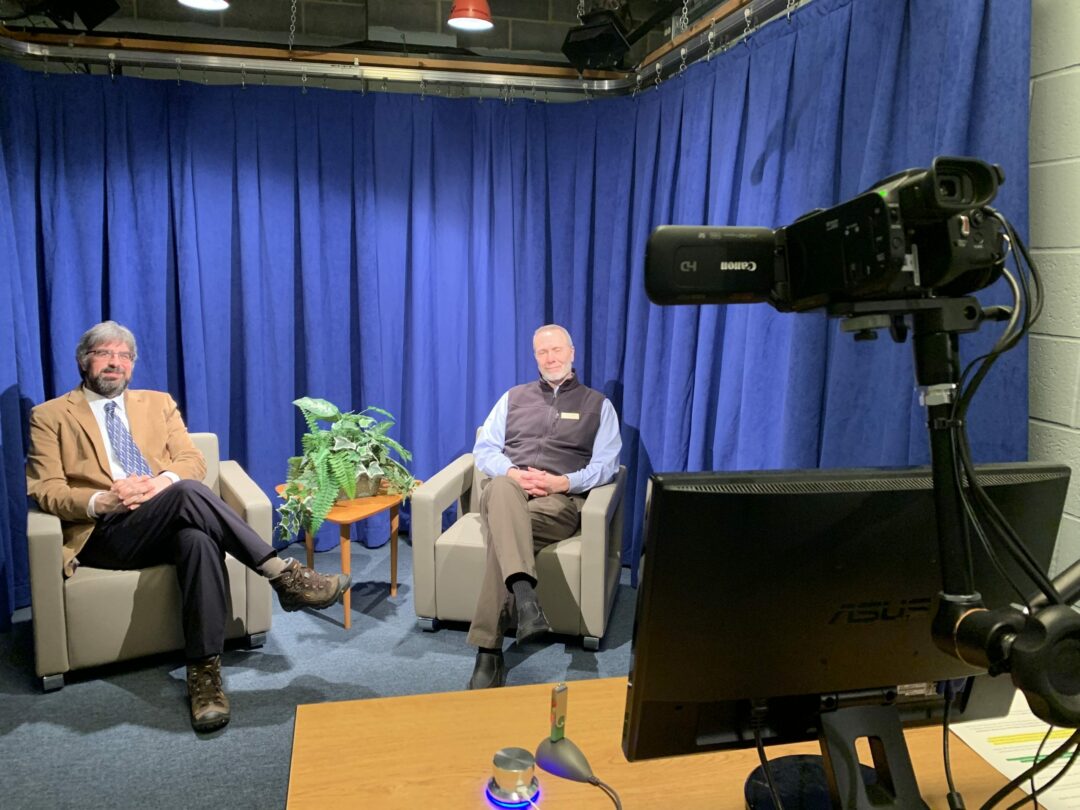 In front of the camera is a professional looking studio for any would-be talk show host to interview a guest. Photos by Diego Cagara / Spotlight News

To be open seven days a week, the ADA-compliant studio space, known officially as Studio Makerspace, will be accessible to anyone with an Upper Hudson Library card who can schedule a three-hour session at a time through the library’s online calendar. It will be available for anyone who can use it to create anything like YouTube videos, filmed interviews, broadcast sessions or audio podcasts.

“The point of the Studio Makerspace is to allow people to create content like producing videos for their social media or creating their own show for instance. There’s lots of reasons why people want to produce content and we want to help provide for that here in the library,” said library director Geoffrey Kirkpatrick. “Here, they’ll have the equipment to both make the video and then edit it too.”

The studio includes a Mac-powered desktop called the One Button studio with a built-in video-recording camera, a namesake silver button to begin and end recording, and a central USB port where the user can insert their flash drive which would contain the recorded raw footage. Upon pressing the silver button, the user is given an eight-second countdown where they would have apt time to sit at the studio’s talk-show-like setting across from the desktop, which comprises of two seats, a center table, and blue background curtains — this is where the user can film themselves as they talk. Once the user is done filming, simply go to press the silver button again to end recording, and the inserted flash drive would have saved the raw footage as an MP4 file once processing is complete.

The library also has 10 laptops — available to be checked out with a library card at the information desk — equipped with Adobe Premiere Elements which can be used to edit and polish the recorded video, including the abilities to convert the files, add subtitles, zoom in/out of the video, and visual effects.

There is also a podcasting studio where the user can record audio and create podcasts for professional or personal use, as well as another machine that allows VHS to DVD conversion. “We’ve had this machine for a while in a different room before so if you have old family movies on VHS tapes, you can come in and convert the files so you can enjoy them more in the future,” said Gordon Noble, the librarian in charge of the new studio. “As soon as you convert it into a DVD, you can convert into a digital file too.”

In addition, video cameras are available for users to borrow for two weeks if they would like to film outside the library for their videos.

There has been a studio space at the Bethlehem Public Library since 1981 and this upcoming one was first constructed in summer 2018, intending to provide more space, opportunities and self-serving applications for users to enjoy.

“I really think that the new studio will give people a lot of freedom and they can become self-producers who can help themselves, rather than having us produce videos for them,” Kirkpatrick said. “The educational component in the library is huge in that we want to promote technological literacy, like giving them the tools to create videos or podcasts. That’s one of our goals.”

E-cig popularity has boomed in recent years, but now NYS is looking at legislation that could hurt business