Bethlehem Central student has talent and drive of an Olympic athlete 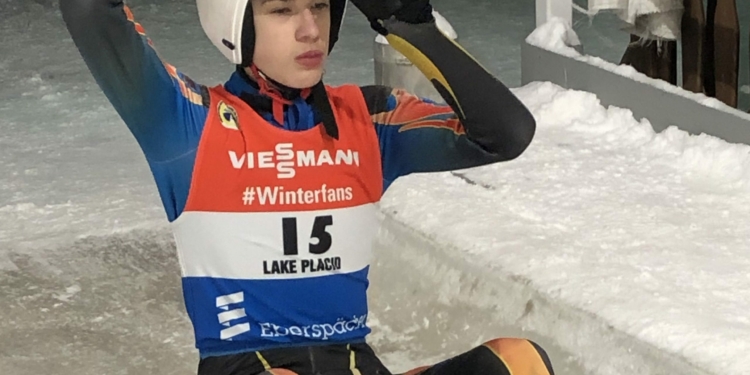 While Bethlehem Central High School ninth-grader Robert Davis may be only 14-years-old, he already has ambitions beyond his everyday life here — he wants to become a member of the U.S. Olympic Luge Team.

His passion for luge began when he and his family were at Lake Placid to play miniature golf in August 2013, where he accidentally ran into acclaimed luger Aidan Kelly behind a counter. Kelly was there to train and hopefully make the national luge team to participate at the 2014 Winter Olympic Games in Sochi, Russia. He eventually made the team, and came in 24th place. Davis recalled feeling intrigued at having met a rising athlete and immediately became interested in luge. “It was really exciting and I was like, ‘That looks amazing, I want to try it,’ and I watched Aidan do it,” Davis said. “Then I tried it myself for the heck of it and I started loving luge.”

Luge is a sport in which an individual not only sleds, facing up and feet out first down a track at speeds of almost 90 mph  but also a competitive sport where the luger is timed for how long it takes him or her to complete the track. Davis added that he grew to enjoy the sport because he liked the adrenaline and speed that came with it, “and I felt like a daredevil, it draws me. What I always like about it is how I can feel so free.” As time went on, Davis said he continued practicing in Lake Placid and in August 2016, he began trying out for the national Slider Search which recruits young athletes, ages nine to 13, to train and qualify them for the national luge Junior Development Team. From there, qualifying trainees could become part of the National and Olympic Luge Teams down the road.

While Davis tried to get accepted into the Development Team several times through summer 2018,  his parents have always ensured he never lost focus on his studies. “His number one job is his school and he never forgets that’s his number one priority,” said Rem, his father. “He’s also very thoughtful and hardworking and he’s very determined.” His mother, Nancy, brought up how Robert regularly sets priorities and expressed pride in how he can juggle many activities, events and school assignments. Besides practicing to luge at Lake Placid, Robert’s general year-round schedule

seemed packed — he was in the school musical, choir, the town’s cross country club, track and field, chess club and two kindness clubs. His parents also included that Robert was on the honor roll for each school quarter from grades six through eight.

When asked what was his secret to handling it all at a young age, Robert laughed, “There used to be very long nights and the hard part was making a schedule every day to decide how many hours I want to spend doing this, this, and this, and make sure I have enough time to do homework. I would also ask for help with homework if I had to and I’d mostly get it done before heading out to my other activities.” Rem said that in addition to Robert honing his luge skills, he was also practicing skills like time management and discipline, which he believed would benefit him in the long run, too.

Robert’s persistence paid off when he was finally asked to join the country’s Luge Developmental Team in May 2018, officially starting later that summer in Lake Placid and slated to end sometime this March.

Aidan Kelly was the team’s coach there too, which Robert said “was kind of a full-circle moment because he went to Sochi and he was the one who got me into it, and he still

remembers me from all those years back.” Since beginning his official training there, Robert said that Kelly has become a true role model for him, offering both valuable coaching and life advice. “He would say that if you’re 10 minutes early, you’re late, and then if you’re on time, you’re also late. For me, I get there at least 15 minutes early so I have time to warm up and not worry.”

“It’s amazing to have successful people like Aidan be such great role models who teach young people coming into this sport about how to be good in it but also teach lessons about how to be a good person,” said Rem. “In this day and age where I, as a parent, may find it hard to feel comfortable seeing your kid look up to a role model, I like it that there are great athletes in this sport who are also great people. I’m excited for my son to be around those people and look up to them.”

However, there is a roughly $5,000 fee for Developmental Team athletes to pay for room and board, training, travel expenses, tutoring and relevant equipment. At one point, the Davis family established a GoFundMe page in an effort to accept donations towards those fees, and is grateful for the financial support they’ve already received from local residents and businesses.  Those who would still like to contribute towards Davis’ expenses may make a tax-deductible donation by contacting Beverly Detwiler of USA Luge via phone at 518-523-2071 (ext. 107) or email at [email protected], and mention Robert Davis from Delmar, N.Y.

While the financial commitment continues to be a concern, Robert keeps focusing on his ultimate goal. He has also expressed interest in traveling around the world and either becoming a Social Studies teacher or an engineer. “I do feel like I’ll be able to combine doing luge and becoming a

Social Studies teacher because I’ll be able to use my knowledge of maybe having been in other countries to compete in luging and then bring it back to teach in the classroom,” he said. “So that my students can feel excited about Social Studies or history.”

While he admitted that the possibility of making the Olympic team could become real within the next few years, he said he remains focused on the present, working to improve his skills and timing — Nancy said Robert’s record speed so far was 56 mph. “I’m really excited for it and you know what? This is a once-in-a-lifetime experience and I’m just going to go for it and make the best out of it and see what happens,” he concluded.