Town Hall is looking at various traffic options in Slingerlands 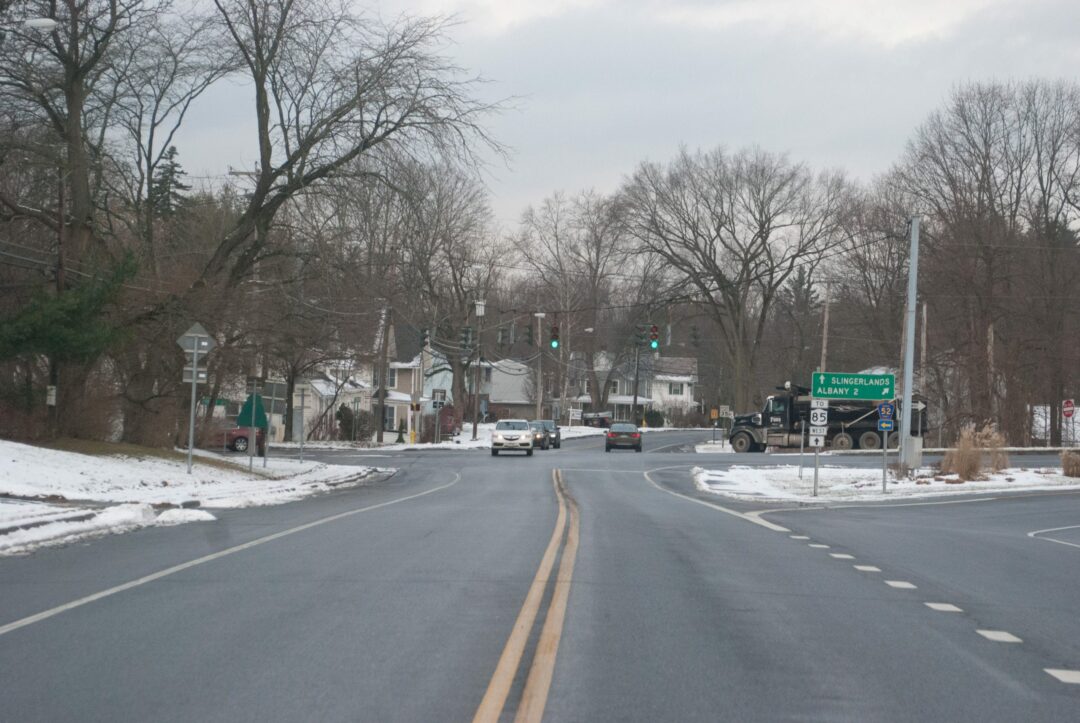 Motorists traveling west on Kenwood Avenue recognize the Cherry Avenue intersection as the threshold into Slingerlands. This intersection, and another where Kenwood crosses with New Scotland Road, will be reviewed by the town for possible changes. Diego Cagara / Spotlight News

SLINGERLANDS — The Bethlehem Town Board has approved a $90,000 transportation study application on Wednesday, Dec. 12 that will look into improving transportation and connectivity in Slingerlands, particularly focusing on the Cherry Avenue Extension and New Scotland Road areas.

Known officially as the Cherry Avenue Extension and New Scotland Road Transportation Study, the town hopes the cost will be mostly undertaken by the Capital District Transportation Committee 2019-20 Community and Transportation Planning Linkage Program, which assists in local communities’ transportation planning. Bethlehem has made use of this program in the past, including projects like the Delaware Avenue Complete Streets Feasibility Study and Route 9W Corridor Study.

Reasons why the study needs to be done include:

• Making the Cherry Avenue Extension, and the intersection of Cherry and Kenwood avenues more pedestrian- and bicycle-friendly with pedestrian signals and walking paths;

• Addressing traffic growth at New Scotland Road which can negatively affect the Slingerlands Historic District’s character; fixing the inconsistent speed limit signs there which show 35 mph and 40 mph, and residents there believe that the 40 mph speed limit is too high;

• Replacing the historic railroad bridge over New Scotland Road with a higher bridge that would then allow truck traffic through;

• Creating access to the Albany County rail trail from the New Scotland Road hamlet area and McCormack Road neighborhoods that are along the Cherry Avenue Extension.

The Bethlehem Police Department reported, as part of this study application, that the Cherry Avenue Extension, initially built around the 1950s, has witnessed 40 crashes in eight years. There is also a request to reduce the speed limit at the Cherry Avenue Extension, which has seen the rise of neighborhoods, commercial businesses and potential further mixed-use development in the last two decades, from 55 to 45 mph.

If that speed limit reduction does happen, the town’s law enforcement and the state Department of Transportation are proposed to work in monitoring the Cherry Avenue Extension corridor to evaluate the effectiveness of the reduction’s implementation for one year. After one year, they will determine if any readjustments are necessary, which may include reverting back to 55 mph.

Before works could begin, Bethlehem awaits the CDTC to review the town’s study cost application and will be informed of an award on Mar. 1, 2019. The town can then access the Linkage Program funds after April 1.